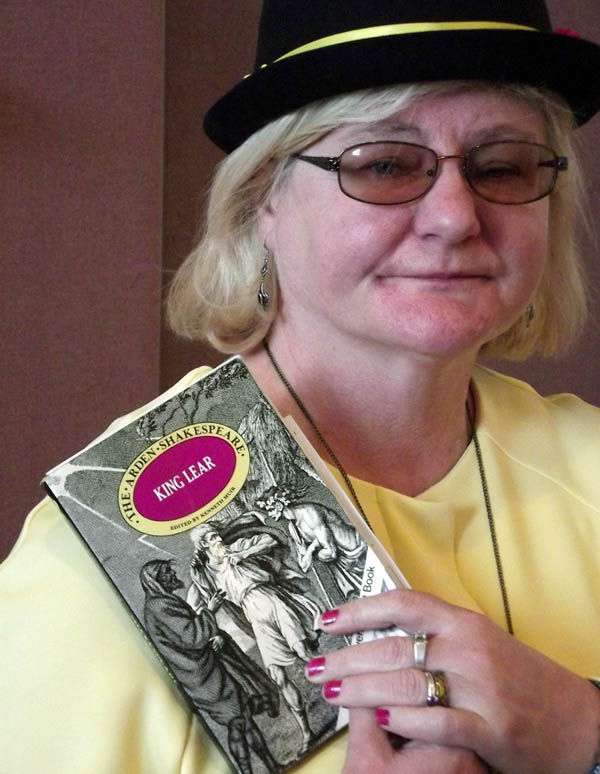 One of the cast. Photograph © Peter Kelly
There's a lot to like in John Binnie's Glesga version of King Lear.

Shakespeare’s King Lear can be dark and gloomy, but playwright and director John Binnie, in collaboration with set designer Robin Mitchell, bring scenes from the play alive in this strikingly modern ‘Glesga’ adaptation. He cleverly rejigs this classic tragedy, retelling the descent into madness of King Lear through a tale of homelessness in Glasgow, with a healthy dose of laughter on the side. But it’s all there: betrayal; the daughters he loves and adores plotting against him; dancing witches brewing up a storm in their cauldron; jousting knights fighting; and lots and lots of murder.

This was a creative production. The finery of the costumes, crown, throne and other props lent it an air of style. The black binbags and clanging pieces of wood to create the noises of a dramatic storm contrasted with the beauty of classic soundtrack used.

The dialogue was funny and made the appreciative audience laugh out loud. But despite the laughter, John Binnie deals with the serious themes of poverty, homelessness, the impact of welfare reform, unemployment pensions and inequalities. The King is overcome by his evil daughters and loyal knights who betray him, and there is a touching moment when he becomes homeless and poverty-stricken, without kingdom, crown, daughters or loyal followers (knights) – a fool. Binnie’s script makes it easy to empathise with the characters; there’s a sense of “there but for the grace of God go I”.

A central theme in this play is the idea that the mind can heal or destroy. Everyone has the power to change their life, be healthier, happier and wealthier; it’s a positive message to send to this audience. I did wish it had been longer – it was difficult to squeeze such a big story with such complicated themes into this 30-minute slot, but the threads wove into a cohesive whole.

John Binnie says that subject to funding, he hoped to return. Here’s hoping he does.