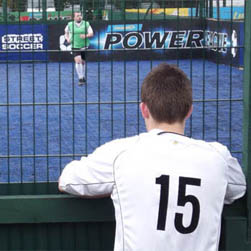 Players at the Street Soccer tournament were there to win. Photograph © Patrick O'Hare
It can really change lives, find the Word on the Street team

It’s a typical grey day in Glasgow but at the Street Soccer tournament at the Power League pitches in Glasgow’s Townhead, the atmosphere feels electric. The players – all of whom are, or have been, homeless – dot the blaze pitches in their bright neon strips

There are 21 teams in all here to compete for this year’s trophy, and the car park is packed with buses.

Pop music blasts from speakers and the noise of balls hitting the nets echoes round the stadium. Coaches shout encouragement from the sidelines: though everyone is friendly, ultimately they are here to win.

Limbering up at a central pitch, one of the Edinburgh teams with less experience is gearing themselves up to start the game. “But I think we’re going to lose,” mutters one team member darkly, eyeing up the competition.

William Ledbetter, playing with the team from Glasgow’s Lodging House Mission, is feeling more upbeat. He’s been coming to weekly Street Soccer sessions, held in cities across the country for homeless people for a couple of years and feels he’s benefited hugely. Currently homeless, he looks forward to the sessions and events. He says: “I really enjoy playing football. It helps me get fit and gives me a bit of discipline.”

A few pitches along, goalkeeper Owen Turner knows that it’s possible to take it all the way. This is not just a local tournament – it’s from here that players are chosen each year to play for Scotland in the Homeless World Cup.

Set up by 2001, last month the Homeless World Cup took place in Chile and featured men and women’s teams from all over the world. Turner, who took part in the Homeless World Cup in Gothenberg, Sweden, 10 years ago, says it was an amazing experience which he’ll never forget. “When I came home, I didn’t get help to get housing,” he says. “But they put me through my SFA coaching and got me volunteering. It made a big difference.” He’s remained a regular with Street Soccer Scotland, helping other homeless people come through the ranks.

No one knows better than David Duke the difference that the Homeless World Cup can make. Today he’s pacing the sidelines in his blue Street Soccer Scotland tracksuit; it’s the organisation that he founded, with a grant of just £3,000 five years ago, and he’s rightly proud of the success it’s become.

After all, as he says, he didn’t have the best start in life. “My parents split up and my dad was an alcoholic,” he explains. “I grew up trying to deal with my dad’s problems. I left school with no qualifications and then just floated about Govan, getting into bother.”

When he was 21 years old, his dad died and he didn’t cope well, moving himself away from family and starting to drink heavily before splitting up with his girlfriend and finding himself homeless. “I started off staying with my mates, then moved on until the point where I had nowhere and ended up on the streets. A youth worker told me to go up the Hamish Allan Centre (council homeless advice centre) and from then on I ended up getting batted from hostel to hostel. I’ve done the whole scene from sleeping on the streets to going to the hostels to going to the City Mission (day centre) on a for a bite to eat.”

After being referred to a support project, he saw a poster for football trials the Big Issue was running. He turned up and played to impress. “I must have played alright. They said: ‘Do you want to come back?’,” he smiles. A few months later, he was off to Sweden (hoping to meet “all those Swedish birds”) to play for Scotland in the Homeless World Cup. He didn't look back.

For one thing, he’d stopped drinking and smoking hash while training. It also helped him get back his self-esteem. “I was always very ashamed of being homeless, the stigma, and trying to hide myself,” he says. “But the Homeless World Cup kinda rips that away from you. I found people were proud of me because I’d taken a step forward.”

Back at home he started volunteering with a youth team, got a job with the Big Issue Foundation and set up Street Soccer in 2009.

With a gift of the gab and dose of charm – along with sales techniques learned in his teenage days selling pirate copies of videos in the streets of Govan – he set about making it something special. Celebrity footballers from former Scotland goalie Andy Goram to once Celtic star Joe Miller are regulars at training sessions here.

Another well-known face in the football world is former Ranger’s player Ally Dawson, who not only coaches at Street Soccer but is also a regular Scotland coach for the Homeless World Cup.

When we meet, the names of the final eight players have just been selected – though only five have got passports so far.

For Ally, though, it’s not just about the glamour of the big matches – it’s the little things that make a difference in this game.

“We don’t judge the guys,” he says. “It’s just being there sometimes, asking them to come down, to join in. They might have problems – but when they come here they can put them aside for a bit. The enjoy it and that’s the start of it, the way we start engage. This is the grassroots and it’s the heart of what we do.”

But he admits there’s a lot of satisfaction in coaching a team that do well in the Homeless World Cup. He remembers the thrill of winning in Paris with a team whose skills complemented each other perfectly. Though, unlike the Premier League there’s no champagne here. There’s no drinking, Ally notes, and no drugs.

Meanwhile the Street Soccer tournament is about to kick off and it’s time for him to get back to the sidelines. And then there’s training sessions for the Scotland squad. So do Scotland have a chance of winning it for a record-breaking third time?

“If they win it, that’s great,” he says. “But we just say: embrace it. You’ll never understand it until you’re out there enjoying it. Guys that have been there, they just can’t explain it. Football brings them all together.”

• The Homeless World Cup Organisation, begun in 2001, was set up by Austrian Harald Schmied and Scot Mel Young.

• 18 teams competed at the first tournament in Graz Austria in 2003.

• The internatonal HQ of the Homeless World Cup Organisation is in Edinburgh’s Easter Road stadium, home of Hibernian FC

• Players must have been homeless in the past 18 months to take part. They can only take part in one World Cup tournament.

• There are eight players in a team but only four players on the pitch at any one time; one goalkeeper and three outfield players.

• Scotlland, Brazil and Italy are the most successful teams, with two wins each.

• 54 teams from 49 national around the world competed in 350 games this year.