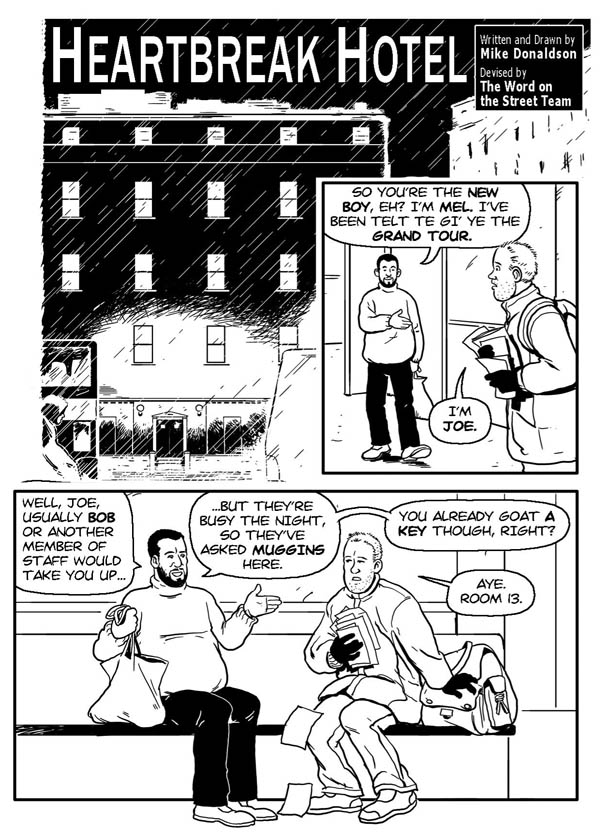 Joe explains the background to our ‘Heartbreak Hotel’ cartoon, loosely based on the experiences of the WOTS team

This month we introduce our new cartoon ‘Heartbreak Hotel’, loosely based on the experiences of the Word on the Street team. Here, “Joe” explains what he learned from living in a hostel

When I first moved into Peter McCann House (PMH), my son had just died, me and my girlfriend had split up, and I became homeless. I was drunk and stoned and planned to stay this way till I died. The first night I lay on my plastic matress listening to the noise. It was constant and to be expected in a building housing 250 men with “issues”.

The drunks were the noisiest of the noisy – they wandered the corridors screaming, shouting, singing and fighting. Often it sounded as if they were speaking in tongues. They were only quiet when they were sober.

These are the two groups that most people would expect to be homeless, but in total they probably made about a quarter of the population of this hostel. The rest had other things going on in their lives.

It struck me that being homeless is a secondary or co-issue. There is usually a lot going on all at once and people lose their homes because they can’t cope with life.

Everyone had been damaged in some way. There was also a lot of ongoing human repairs being made, by the support staff and the men themselves.

When I was in the PMH I was emotionally raw and vulnerable, and living alongside others in pretty much the same state. It could have been a violent or abusive environment; that’s what I expected. Instead, unexpectedly I got empathy. I found humanity there.

I could go to my room, shut the door and rest in the relative calm and quiet. But whenever I needed chaos, it was right outside; sometimes, I needed it to equalise the pressure of the thoughts going round my head.

And there was plenty of chaos. In the morning, there was always someone lying face down in the showers, though cold water sorted that. At night there were fire alarms; the best way to get hold of an unresponsive drug dealer is to set off the fire alarm. But there were also people who treated me with compassion when I needed it most.

Now I’m living in a flat, but I still think fondly of that time. Those dysfunctional people saved me from myself. I was living in the worst possible situation and I survived. It’s the bogeyman, homelessness. But I’m not scared of it anymore.

< In focus: The Indy Ref is over. So what next? The Homeless World Cup >