In focus: The Indy Ref is over. So what next? 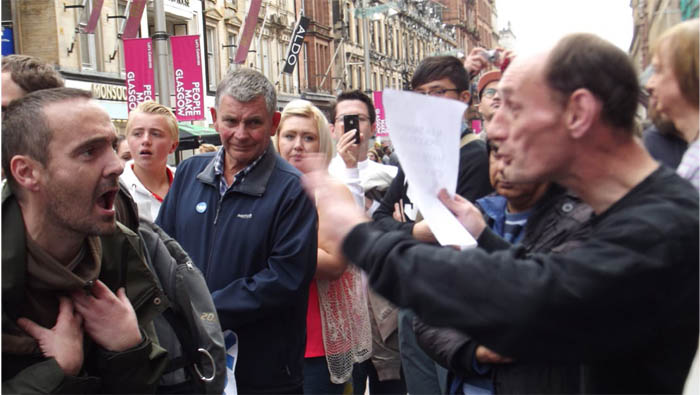 Debate on the streets has been heated in recent months. Photograph © Brenda Brown
The Word on the Street team interviewed and photographed people on the campaign trail, attended a packed hustings for homeless people at Glasgow's City Mission and listened to heated arguments...

It’s been a pretty interesting few months to be in Scotland. As the debate raged about whether we should vote ‘Yes’ to make a fresh – and many hoped fairer – start or ‘No’ for what others believed was a more secure future, the Word on the Street team followed the action.

We interviewed and photographed people on the campaign trail, attended a packed hustings for homeless people at Glasgow's City Mission, listened to heated arguments on street corners and spent time in George Square, where many from the Yes camp congregated.

And after the vote was cast we wondered: what next? Ed Milliband, David Cameron and Nick Clegg have promised Scots extra powers, leading to much discussion in England about whether a devolved Parliament is needed there too.

We asked people with experience of homelessness – from both north and south – what they thought. This month we're off to the Scottish Parliament to find out what the politicians are up to. Watch out for our next report.

“I was kind of frightened about going alone to start off with, but now I definitely think Scotland needs more powers. I’m on sickness benefit, but I’m going to a assessment tomorrow and dreading it. I’d like to think that in an independent Scotland, the benefit system would have been fairer."

“Yes, I think Scotland needs more powers – after all, I’m Scottish. And that’s what I voted for. I love the Queen, but I love Scotland more. Ultimately, we have to break away from England. We have so many resources of our own from oil to fresh water. Scotland would be better off, and so would we.”

The Scottish government has called for Scotland to be given full responsibility over welfare and social policy to help protect some of the country’s most vulnerable citizens.

“It is clear that the UK government’s benefit reform programme unfairly impacts on some of the most vulnerable members of our society, as nearly every household in Scotland in receipt of a working-age benefit will be affected by plans to introduce a two-year benefit freeze,” she added.

“Poverty is the biggest issue Scotland faces, and with one in five children growing up in poverty, it is impossible to ignore.”

She claimed that without additional powers which would allow the Scotland to address poverty, an additional 10,000 children would be living in poverty by 2020.

The Scottish Government has included the call in its submission to the Smith Commission, which is responsible for ensuring parties agree on a plan for more powers by 30 November this year. It is headed by Lord Smith of Kelvin.

Peter Kelly, Director of Poverty Alliance, said: “Scotland is a vastly unequal country, with the three richest families owning the same wealth as the bottom 20 per cent.

“The Poverty Alliance will be exploring how the devolution of new powers could help eradicate poverty in Scotland, and we will be feeding into the Smith Commission on this.”

However, some are still sceptical about the additional powers, which were offered when the Yes campaign took a jump in the polls, less than two weeks before the vote.

On the morning of 19 September, I awoke to discover that Scotland had voted ‘No’ in the referendum for independence. For me it was depressing: I wanted a death knell in the heart of Westminster.

I can relate to the struggle for Scottish independence; I too feel I live under the oppressive regime currently in place in SW1A. As an Englishman, I would be the first to stand up and shout 'Yes' as loudly as I could. I wanted Scotland to ascend to an existence dreamed about by generations of Scots. It would have given hope to many in England, Wales, and Northern Ireland that there was a chance to change.

Westminster promised additional powers to Scotland if they voted no. Now right leaning voters have started talking about a devolved England, blocking anyone other then English MPs to vote on our own matters. To me, this is a mistake while the union is in place. The last thing we need now is another level of bureaucracy. The independence referendum meant so much to people on both sides of the border. But if one looked toward the gates of Parliament in Westminster, it was really business as usual.