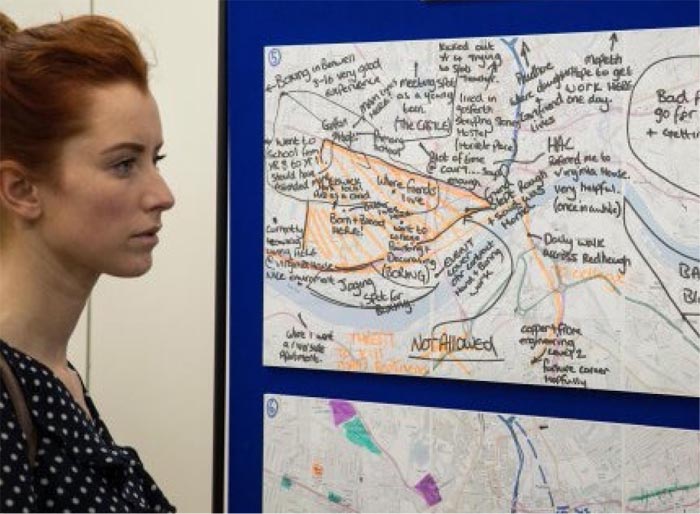 The project ‘Imagining Homelessness in a City of Care’, developed by researchers Adele Irving and Oliver Moss of Northumbria University, and artist Jo Oldham, involved 30 homeless people who were asked to write notes about their lives onto maps of the city.

Funded by the Economic and Social Research Council (ESRC), the aim was to give homeless people a say, and also inform the public about homelessness. The responses of the homeless participants, in the form of notes and areas marked off in pen, tell their life stories in simple but powerful ways.

Some marked the places they had first slept rough, used drugs, found a hostel or soup kitchen or finally got help. Most also marked in important places in their early years including schools, swimming pools or foster placements. One person marked that she had had 75 foster placements starting at the age of three, and the one foster father she had settled down with had been killed in a car crash. She also details the place she first slept rough at 21, and where she finally got help and support.

Several have marked the places where they had jobs, alongside the areas they later lived when homeless. One charts her battle for mental health, writing she had to leave sixth form, though she “loved school” because of her mental state. Several hospitals feature on her map, though she also writes in large letters: “2014 is the first year I haven’t been in hospital.”

Another writes in a wavy line that follows the city’s river: “I’m surprised my body isn’t in the Tyne”. But there are also hopes for the future, with dreams of getting a flat “for me, my girlfriend and baby”, and “becoming support worker” included.

All 30 of the participants’ maps were given to Jo Oldham, who compiled them into one handdrawn map. Both the original maps and hers have been shown at exhibitions and events held last month across Newcastle.

Adele Irving said: “The project has taken on a life of its own. There is something very moving about reading the sometimes very simple messages written down next to their location on the map.

The response has been amazing. It’s been so powerful. It just reminded people about the experiences, not that we become numb to, but perhaps that they don’t think about all the time.

Equally we want to show that they have had difficult experiences and face significant challenges.

“We also hope it adds to the debate on the increasing punitive response to visible homelessness, with the police moving people on for example.”

Artist Jo Oldham, of designer Lovely Jojo, said: “There’s something really personal about hand drawn maps, and I think this style really suited the intimate nature of the stories being shared.

“When they were asked to take part, everyone was excited that they would be shaping a piece of art that would be seen by people who might not otherwise think too much about the stories of people who are homeless. So I hope they feel that the final piece did their contribution justice, that it shows the some of the varied and complex routes into homelessness, and that it humanises homelessness for the people who view it.”

The team are hoping to repeat the project in other cities including London.