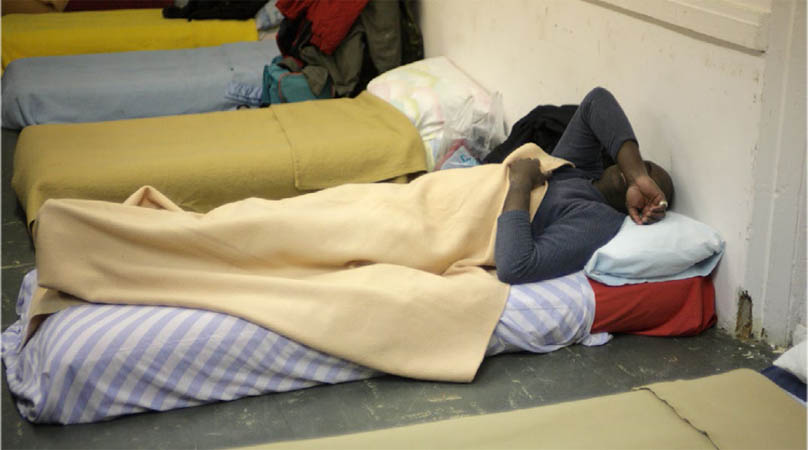 Shelters are warm and safe but often pretty basic © Night Shelter Forum
Winter night shelters haven’t always had a good reputation. But they can save your life, finds Mat Amp.

I spent nearly five years homeless, including a stint on the street. So you’d think I’d know about night shelters. But I didn’t know much. Only while writing this did I realise I didn’t go because, with the twisted logic of someone who really needed help, I didn’t think I deserved somewhere safe to stay.

I’ve met lots of people who’ve used night shelters, though, and while some describe them as positive and nurturing, others have talked about them as hard-core doss houses where violence and disease spread thick and fast.

As it turns out, the difference seems to be down to one factor – time. Those who say the night shelters they stayed in were frightening places are usually harking back to the bad old days. But in 2005 the Hostels Capital Improvement Programme, which later evolved into the Places of Change Programme, was launched.

Since then, night shelters have changed dramatically, as I discovered when I visited the Robes Project in the Elephant and Castle. David Rossi, 53, is one man who says that Robes literally saved his life.

There isn’t the space here to go into his eviction from a south London hostel last year, suffice to say, what happened destroyed his already shaky trust in the system. He’d already grown up in care. At five years old he had shared a single room with his brother, his mum and his step-dad, and on a few occasions he came home to find his mother on the floor having taken an overdose.

He said: “I was in care in the Seventies which, as we all know, wasn’t a good time to be in care. I’ve got nothing but bad, bad things to say about it, so I walked out when I was 16. From that day on, I tried not to engage with any services, even when I needed them.” And now, homeless services were proving his worst fears right.

When Dave was told he would be evicted, it was the proverbial last straw. Caught between a rock (homeless services) and a hard place (the street), he decided he could not go on. He told the charity that ran his hostel that if they went through with the planned eviction, he would kill himself.

There was no intervention, he wasn’t offered counselling and when they came to reclaim the room, Dave was unconscious on his bed having left a note at the door warning whoever found him to call a health professional because he would be cold and dead.

He wasn’t. Instead, he came round in hospital. And his problems continued.

But the Vicar at St Mark’s changed all that when he invited Dave into the church for a chat. He told Dave about the Robes Project and how to gain a referral through the Ace of Clubs in Clapham. Just 15 minutes of advice from someone showing genuine empathy and compassion was enough and Dave went for it.

It took a few weeks for him to get a place, but once he was there he could finally start that journey back from the broken edge. He said: “I woke up the next morning and I was so happy and relieved that I had had a good night’s sleep and that I was somewhere warm and safe.”

Most shelters use a number of churches on rotation, but Dave is keen to stress that religion is not a part of it. “They are just caring people,” he shrugs.

It’s still crisis accommodation, of course; many are in church halls and run by volunteers. Beds are usually mattresses and bedding on the floor. A cooked meal in the evening and breakfast in the morning are standard, as well a listening ear and support to help you find the best way forward.

Most shelters in London are now by referral only – in Glasgow and Edinburgh, access is on a first-come, first-served basis. It can sometimes take awhile to get that referral – every shelter works differently.

But when you know you have somewhere to stay that night, it changes your mindset.

Dave tells me. “I never heard of things being stolen because we all got to know each other and respected each other. We had all seen each other at our worst and we’d also seen some good news. People getting housed and there is not resentment there – we were all really happy for each other. I know it sounds really flowery, but that the way it was.”

This is so far away from some of the horror stories you hear from people who used night-shelters 15 or more years ago. In addition to a more nurturing environment, most shelters now also offer help with finding housing and employment. There is advice on hand, and support to find solutions to problems.

It’s still not perfect, a fact acknowledged by Mark Brennan, chair of the Night Shelter Forum in London, but most shelters across the UK have improved beyond recognition.

Most importantly, according to Brennan (who works for Housing Justice), the ethos in most of them has changed dramatically. Those using the shelters are guests, hosted by the volunteers running them.

“The ‘guest’ versus ‘client’ distinction is absolutely crucial,” he says. “During the day, shelter guests are engaging mostly with clinical homeless services as a client and a customer and as a service-user, getting their problems addressed by professionals who are being paid for the service they are providing.

“They arrive at the shelter in the evening as a ‘guest’ with shelter volunteers (not paid workers) as their hosts and welcoming them as they would guests into their own homes.

Shelters’ primary focus is on who their guests are, not just their problems.

“They care about what they are good at, what they care and are passionate about and use that to help them build confidence and trust and self-worth.”

So if you’re hesitating about accessing a night shelter because you’ve heard a negative story, don't. It could change your life.

Shelters – what you need to know...

Shelters are mostly run by volunteers. People here are doing it because they care. The aim is that the stability helps you move on with your life, as well as just helping you survive the coldest months.

Getting access to a shelter is different in every borough in London. Some take referrals from homeless people themselves, some through day centres or support workers. Ask around for more information and check the listings.

Accommodation is basic and often provided in church halls. But it will be warm and safe.

Many shelters will have a code of conduct. This may include rules about the use of drugs and alcohol.

Most shelters are open from December to March. During Christmas week most London shelters will close and guests will be moved to Crisis at Christmas shelters.