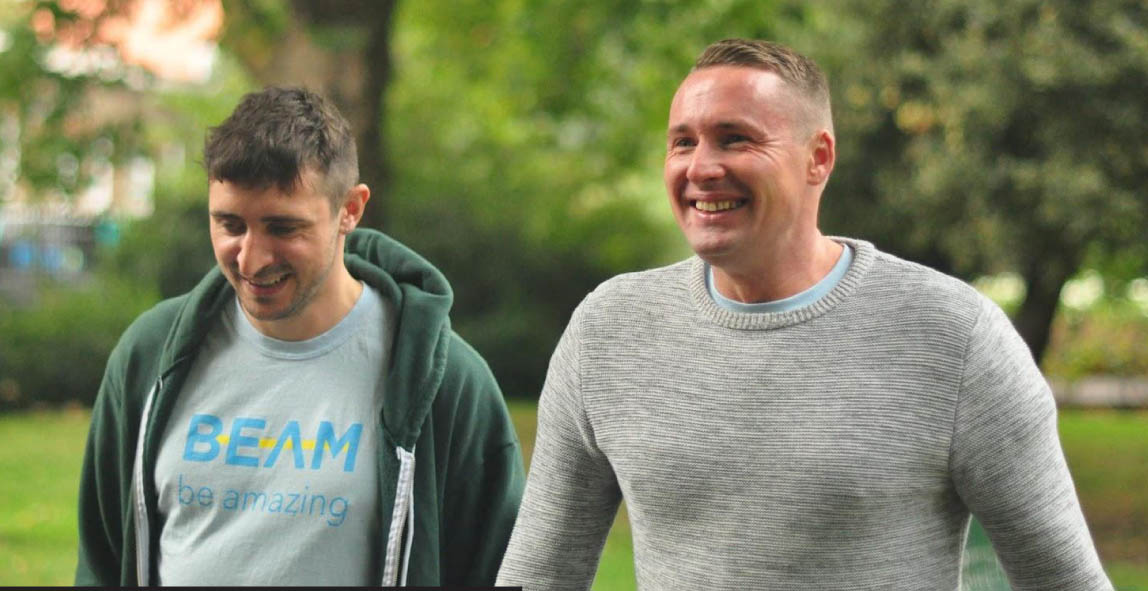 Beam Member Manager, Seb Barker (left), and Beam member, Joe (right), who has secured crowdfunding to train to be a crane rigger © wearebeam.org
Tech for good, from homeless to Cambridge student, the Homes Bill and more...

Part of the new ‘tech for good’ movement, Beam has just finished an initial crowd-funding tester to get five homeless people out of debt and into work by funding their training and even course kit requirements, such as hard hat and boots. During the pilot, Beam’s first member to pitch for funding was Tony who lived in a hostel in south- east London. In less than a month, Tony successfully funded his campaign to train as an electrician, raising £4,378 from 136 supporters. “When I first heard about Beam,” says Tony, “I thought, ‘why would anyone want to help me out?’ "I couldn’t believe it when the money started coming in. Then, when I read the messages from my supporters, I just didn’t have words. Thanks to Beam, I’m now training to become a fully-qualified electrician.” To become a Beam member you need to be referred through partnerships with more than 10 registered homelessness charities, including St Mungo’s, Centrepoint and Thames Reach. Donors can pick who to fund and will receive regular updates.

Edwards has spent the majority of his adulthood sleeping rough, raising money by selling The Big Issue.

Initially sceptical of his chances, Edwards was convinced to apply by his college course tutor, even though he “didn’t think Cambridge University would take someone like me.” Having left school early Edwards took up a job as a field labourer, soon finding himself homeless once that work ended.

He then chose to attend a college course aimed at reintroducing adults to education. Commenting on his enrolment, he said, “It is the first thing I am proud of in my life.”

A total of 270 homes will be made available by 15 housing providers and two private rented sector partners.

Meanwhile, intensive emotional and practical support will be provided to rough sleepers, including free access to documents, such as birth certificates, which are needed to secure housing.

As part of the scheme, emergency help will be available to rough sleepers as soon as the temperature drops below zero, the first such pledge among the country’s major metropolitan areas.

The Homes (Fitness for Human Habitation and Liability for Housing Standards) Bill proposed by Karen Buck, MP for Westminster North, is set for a second parliamentary hearing, making it a step closer to passing into law.

The Homes Bill has gathered support across party lines and recently received the backing of the Citizens Advice Bureau (CAB). The aim of the bill is to hold landlords accountable for the conditions of the homes they rent out.

Current law fails to cover inadequate heating, fire safety and poor ventilation, the latter of which commonly leads to illness. The English Housing Survey says 16.8 per cent of private tenanted properties have Category 1 Housing Health and Safety Rating System (HHSRS) hazards (deemed a serious risk to the occupiers’ health), this is around 756,000 households, while a further 244,000 social tenanted properties have Category 1 HHSRS hazards.

The bill will also assist local authority enforcement powers, enabling tenants to act on the same issues and standards as authorities. While it is possible for local authority to enforce fitness standards following the 2004 Housing Act, about 50 per cent of councils have served only one, or in some cases none in the last year. The Homes Bill seeks to amend this.

Glasgow restaurateur Muhammad Sultan has urged other businesses to mirror his charity and offer their services to homeless people. Sultan, who runs Charcoals Indian Restaurant, has given away 1,000 meals since August and is preparing for a busy festive period. Charcoals provides meals two days a week between 3pm and 4pm. Sultan also cooks meals for The Lodging Mission in East Campbell Street and the H4th soup kitchen in Cadogan Street. Unwilling to rest on his laurels, Muhammad is keen to develop his charity action, "I'd love to one day open a sheltered house where they could stay. I can't give them a home just now, but I can at least make sure they are fed," he told Glasgow Live.

A project named Invisible Edinburgh is training homeless people to act as tour guides in the city. So far eight people have been trained and are leading informative walks across the city, according to the Scottish Sun.

Guides are encouraged to lecture participants on the tour on an array of subjects and characters from the city’s past. “The guides were trained how to build a tour of their choice around a specific theme that they chose,” says the social entrepreneur behind the scheme, Zakia Moulaoui.

A community initiative based in Portsmouth called The Rucksack Project has converted a double-decker bus into a 12-bed shelter for people sleeping rough in the winter months.

The bus company Stagecoach supplied the Volvo bus to The Rucksack project following a plea from Joanna Vines, who organised the initiative.

It cost £6,000 to refurbish and is fitted with a toilet and kitchen space. Joanna told the Metro that it was a community effort, with a college offering to construct the bunk beds and a team of electricians and plumbers making the place hospitable. The local housing association donated the kitchen.

The charity Action Hunger has launched a vending machine for homeless people in Nottingham, reports the Nottingham Post.

A machine will then be introduced to Manchester and, should it prove a success, Birmingham and London.

The machine dispenses fresh fruit, sandwiches, socks and sanitary towels and will be accessible 24 hours a day for up to 100 homeless people. Half of the vending machine’s items were donated by the FareShare charity, and the city’s outreach centre the Friary is assisting with people’s access to the machine’s cards.

The Muslim faith-based charity Human Appeal hopes to provide 21,000 coats for Britain’s rough sleepers. Its Wrap Up campaign will operate in Glasgow, Manchester and Birmingham, and coats will be available to people in London via the Hands On London organisation.

“We aim to help people in need all across the world regardless of their race, religion, gender or location,” said Human Appeal chief executive, Othman Moqbel.

Sleep in the Park, the sleep-out in Princes Street Gardens, Edinburgh, on December 9 raised £3.6 million for homeless charities.

The sleep-out was organised by Josh Littlejohn, co-founder of Scottish sandwich shop chain, Social Bite, which raises money for the homeless via a network of cafés, fundraising events and a restaurant. Around 8,000 people attended, including John Cleese and Liam Gallagher.

Disturbing news from the US. Denver police, city workers and park rangers are issuing camping ban tickets on homeless people sheltering in tents despite sub zero temperatures. In Denver, The Unauthorized Camping Ordinance outlaws camping in the city. Denver Homeless Out Loud, a campaign organisation, claims this is being done on developers’ behest to ensure no homeless people will camp by newly-built condos.

Her Story: I will survive >