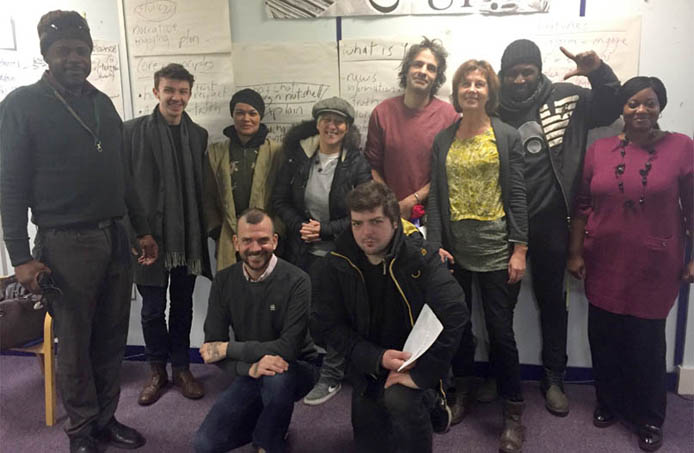 From the Ground Up peer journalists © Groundswell
We start our special issue on shame, written by peer reporters who have experience of homelessness, with a think piece

We start our special issue on shame, written by peer reporters who have experience of homelessness, with a think piece.

Let’s start by looking at what we mean by shame. Fossum and Mason in their book, Facing Shame: families in recovery (1998), state that: “While guilt is a painful feeling of regret and responsibility for one’s actions, shame is a painful feeling about oneself as a person”. In other words guilt is about what you have done, whereas shame is about what you are and occurs when the individual perceives an inadequacy or deficiency in themselves.

One PhD’s research in America entitled Homeless Men: exploring the experience of shame (Iowa, 2014) looked at the role shame played in the lives of homeless men. The study observed that shame was experienced as a “painful sense of worthlessness and failure” and that many homeless men blamed themselves for their homelessness. It was also found that shame was so painful an experience that “people will do almost anything to avoid it”.

Homeless men were seen to adopt “negative strategies” to avoid the pain and discomfort of shame. These strategies included substance misuse, aggression, avoidance, isolation and negative ways of thinking. Moreover, it was suggested that whilst these strategies might work in the short term, in the longer term they diminished the individual’s opportunities to move out of homelessness.

It does make sense that if you do not believe in yourself, and in fact blame yourself for your situation, then you are less likely to feel that you can change things for the better. Furthermore, when shame leads to negative behaviours such as substance misuse or dependency, the individual’s feelings can easily spiral into a self-perpetuating and incremental cycle of self-loathing.

In ongoing research into the effects of pain amongst homeless people, the homeless charity Groundswell found that 70 per cent of homeless or unstably housed people interviewed, either agreed or strongly agreed, with the statement, “I feel ashamed of my situation”. Evidently shame was a word and an issue that resonated profoundly with their respondents.

In conducting interviews for this article, I spoke to Peter, a 65-year-old English male, who has been homeless for “15 years on and off” who is currently living in a hostel in London. Peter explained that he first became homeless when his own woodyard business failed in the early 2000s. At the same time his “marriage fell apart” and he was forced to leave the family home. Peter told me that when he became homeless, he acted out by being aggressive and using amphetamine.

“I felt weak, and being aggressive made me feel and appear more powerful."

"The same with the speed. It made me feel better about myself (at least while I was on it) and that was kind of an escape from the terrible feelings I had towards myself.” Asked to elaborate on those “terrible feelings” and if he had any views on shame, Peter stated: “Yes I do feel shame. Sometimes I feel less than human. It’s like all my power as a person has just gone. I beat myself up because over the years I’ve lost everything I had. My wife, job, home and everything that made me into me.

"Now I mostly feel invisible or an embarrassment to myself and others.”

The phrase “embarrassment to myself and others” highlights a constellation of feelings that seemed to recur in several of the interviews. Jeffrey a 50-year-old Austrian man put it like this: “You are nobody when you are homeless. You just don’t count. People treat you with either hostility or pity. I don’t want either. I want to be fully myself and I need a home to do that.”

As well as having lost their home and all the appendages that came with it, some of the interviewees spoke about a loss of, or change of, identity that they experienced as a result of their homelessness. Frank, 44, and currently homeless, says: “I used to be a real person.

"Now I am just a sleeping bag and a couple of bags in the street. I have had people literally walk over me when they are out on the piss. It’s like we don’t really exist in their eyes. It’s not just that, but you end up not wanting to be seen because you feel ashamed.”

Agnes Heller in her book The Power of Shame: a rational perspective (1985) makes this point in a different way when she remarks that: "The eye of others is the stimulus which triggers the feeling response and the expression of shame: it makes us blush, hide our face, it arouses the desire to run away, to sink into the earth, to disappear.”

It is small wonder that many homeless people seek respite from shame through the use of drugs or alcohol.

How then can homeless people move on from, or shed, their feelings of shame?

Common sense would suggest that one way might be to take actions that could lead to a greater validation of self and improved self-esteem. For example, volunteering or joining mutual-aid groups and generally increasing relationships with the rest of society.

These options are not as easily availableto homeless people as they are to ordinary mainstream folk. Counselling seems like a great idea, but when you are not living in one place for more than a couple of days at a time, and are very short of cash, such services are not easy to access.

You can use the listings for some suggestions about support available to homeless people, including free counselling.

One thing that does not facilitate the discharge of shame in homeless people is the way people tend to marginalise, vilify and dehumanise them. Perhaps in so doing, people project their shadow-selves on to the homeless people in order to go about their business without incurring the pain of shame?

The way forward may be to simply recognise that we are all human beings, whether we are housed or not. Pushing people into unseen corners might make us feel better about our own shame, but it doesn’t do much for theirs. Relationship, connection and contact are what promote social cohesion and the strengthening of the self.

Things are looking up for Peter. He has the chance of a flat coming up (largely on the grounds of his age). He no longer uses speed and is thinking about doing some volunteering. For the first time “in as long as I can remember, I feel a bit of hope for the future,” he says.

It’s such a shame so many do not.

Shame is a painful sense of worthlessness and failure.

If you blame yourself for your situation, then you are less likely to feel that you can change things for the better.

In one study, 70 per cent of homeless or unstably housed people either agreed, or strongly agreed, with the statement, “I feel ashamed of my situation”.

"People treat you with either hostility or pity. I don't want either."

"Now I mostly feel invisible or an embarrassment to myself and others."

If you are homeless it’s hard to move on from shame because other people tend to marginalise, vilify and dehumanize you.

Strengthen yourself using the tips on page 12.

Use the Listings in this magazine to find support and free counselling.

So can you really judge a book by its cover?

Under these circumstances, under this cold weather?

Can you spare change? Make a change? Show some compassion?

Haven't the funds to keep up with trendy fashions.

And don't have the pennies for a cuppa tea.

So who's to blame? Who should be ashamed? You or me?

Have you got the courage to look me in the eye?

And feel the pain and hear my cries?

My presence is invisible to you, out of sight out of mind

A poem by McGinlay, who specially crafted it for the Pavement during From the Ground Up writing sessions.