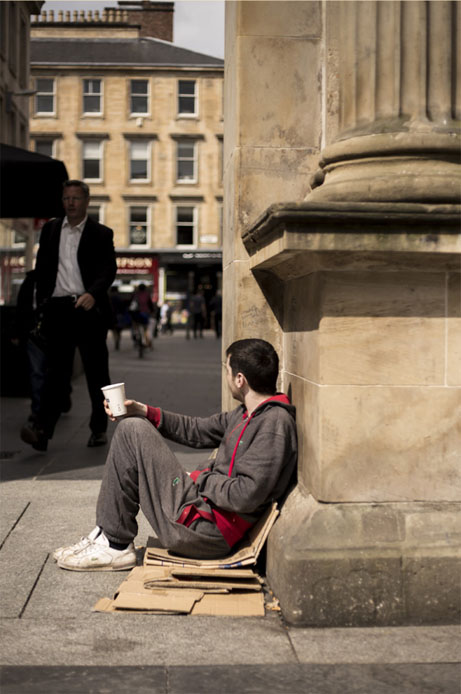 Homelessness and suicide are caused by similar life-changing events © Ilisa Stack
Low income, debt, and unemployment all increase the risk of suicide, but they are also some of the causes of homelessness

Low income, debt, and unemployment all increase the risk of suicide, but they are also some of the causes of homelessness.

While empty apartments are rising on every last inch of land in London, the cracks in society are getting wider. We feel this shift and register the balance is off, but now the Samaritan’s report Dying from Inequality (2017) has revealed the mortal harm of this injustice.

The report finds that areas with higher social and economic deprivation tend to have higher rates of suicide – two to three times higher than the most affluent areas. While it may come as no surprise that living in poor conditions facilitates human misery, this report shows how austerity has left the most vulnerable at greater risk.

The shattering loss of a home or a job severs social ties and breaks up support structures, key protective factors against stress, leaving the individual more isolated and at greater risk. Those already on the edge are hardest hit, as the risk of suicide is amplified if a person is already experiencing multiple negative life events, such as poor health, unemployment, poor living conditions and social isolation.

With increasingly limited access to services and support, those in more socio-economically disadvantaged circumstances were left more vulnerable.

These same circumstances which increase the risk of suicide – low income, debt, and unemployment – are also recognised by charities such as Shelter as being among the structural causes of homelessness.

Echoing other experts in the field, Alex Bax, Chief Executive of Pathway, a homeless health charity, says they are “seeing the impact of austerity” on wellbeing. “The benefit system is becoming harsher, harder to deal with and people are given less money. It’s difficult accessing what’s available; there are more barriers, and there is more gatekeeping.”

With cuts to mental health services, the housed population faces longer waiting times for assessment and treatment, but for the homeless population accessing these services is fraught with further difficulties.

One of Pathway’s Experts by Experience, Stan [name change], has observed “two huge pitfalls for someone who is homeless, the lack of a fixed address and dual diagnosis".

Gaining access to healthcare services, particularly GP practices, has historically been problematic for those in the homeless population without a fixed address or forms of identification. It often forces people to turn to A&E when their health condition has worsened and become more difficult to treat. Additionally, as many in the homeless population are not fixed to a local area, they are more likely to slip between healthcare service providers, further preventing access to treatment.

At a time when there is evident need for more support, drug and alcohol services are also being slashed, even though drug-related deaths are at a record high according to the Office for National Statistics.

Cuts to these services exacerbate the difficulties in treating complex conditions such as dual diagnosis, or a mental health problem combined with problematic substance use. There is currently no agreed upon point of contact or treatment for dual diagnosis, with mental health services and drug and alcohol teams arguing the initial responsibility for treatment lies with the other.

Not denying the good intentions of healthcare professionals in both services, without joined-up thinking this fragmented system of support leaves the individual knocking at the doors of bureaucracy and at a greater risk of harm.

Austerity has deeply fractured our society, severing support structures and leaving the most vulnerable at risk.

• Read Dying from Inequality on https://www.samaritans.org

< Why suicide? Everybody hurts >