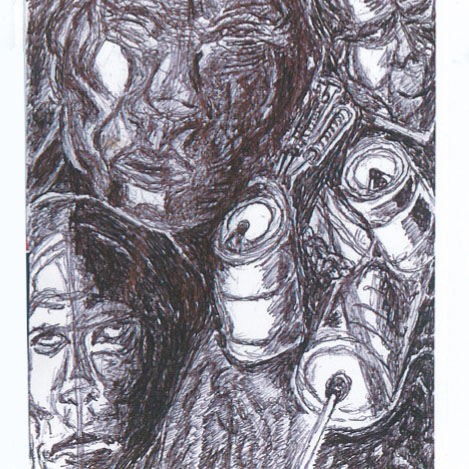 In this interview extract, Matt Hobbs identifies the risk of homeless people dying by suicide as a problem caused by government policy

Alex Bax, Chief Executive of Pathway asks, “What’s leading people into a position of being so desperate that they kill themselves? What is it about our social structure? If you put people under chronic stress and take their money away, what do you think might happen?” It’s a rhetorical question, but clearly new solutions are necessary to bridge the ever-widening chasm between the ones dying from inequality (as the Samaritans' report put it) and richer areas.

For Bax, there are several protective factors which keep people alive during times of despair. They are “a sense of purpose, agency, and having some human relationships. That’s what people live for. Being alive is something other than just not being dead.”

Adar Owuna talks to his friend Susan about her nephew

Q. I want to ask you about your nephew’s departure from the world...
A. I didn’t know that it was that serious because nobody had shared it with me. Had I known, I would have wanted to do whatever I could. Looking back people have said, ‘What could you have done?’. I didn’t expect the suicide. Neither did I expect anybody that did suspect it to have ever left him on his own.

Q. Did you receive any support or help or even assistance from any services to guide and support you through this traumatic time?
A. No, but my sister (his mother) is having counselling. But no, I didn’t personally.

Kevin Headley (peer reporter and homeless healthcare peer advocate at Groundswell) is currently attending a health and social care course in community outreach for vulnerable people. As he says, you can't get more vulnerable than a possible suicide victim

Homelessness is where I met a radical and mysterious friend, who this painting by Elizabetta Panno, depicts uncannily. She was a school children’s support worker, therapist, artist and homeless at the time, but can I call the suicide victim, Miss Valentine for now? She allowed me to stay with her small tribe of homeless squatters.

Miss Valentine suffered from mental illness, including depression and anxiety, and was found one morning hanged in the squat. She might have taken her own life a long time before if it wasn't for her love of costume and cabaret workshops.

"Homeless Anonymous is a peer-to- peer solution to gather those who have experienced the street and those who are currently living on the street. In a guided environment, they are able to speak about the problems that occurred during their time. They know what it’s like to have no food, no showers, no life – but many experience suicide, waking up next to someone dead. We talk it out to get back to living how the other half live," says Jonathan.

Q. Could you give us a little background on the circumstances with your son?
A. Nik was 17 when we first became homeless and living in a car in Australia. Once, we were driving down the main street of Darwin and he said, “My life is a load of shit,” and tried to jump out of the car. His last attempt was November 2014 when he was found with a rope around his neck and in a daze.
He was taken to hospital. The doctors left him alone for three minutes and he slipped out. Not to be seen for a week. Then he rang me and I got him into a shelter. That was attempt four and his last.
[Happily, Nik’s now 22 and living with his girlfriend and her mum.]

Q. What was he like before the event?
A. There were no signs except that we were homeless and he didn’t like it. When you combine homelessness with suicidal ideas, it is very hard to see it coming.

Q. Did you ever feel the same way as him?
A. Whilst I was homeless – NO – as I had responsibility. I had a son, Nik, to look after and I was determined to get through the shit, and whatever it was that we went through.

Q. Why did your son feel suicide was the only option?
A. Not sure. Dad failed? Homelessness sucks? No food? No money? Complete change of lifestyle? You could really pick anything.

Q. Did you feel there was any sort of safety net or anybody to contact?
A. When you are homeless, it is like living with a paper bag over your head. As much as you want to be strong to get yourself out of the shit, it is extremely hard to do.

Q. Could anything have helped?
A. Yes, more awareness towards what it is like to live on the streets. We are no different from anyone in a house, yet we are left alone with little support.

< Not a number You are not alone >