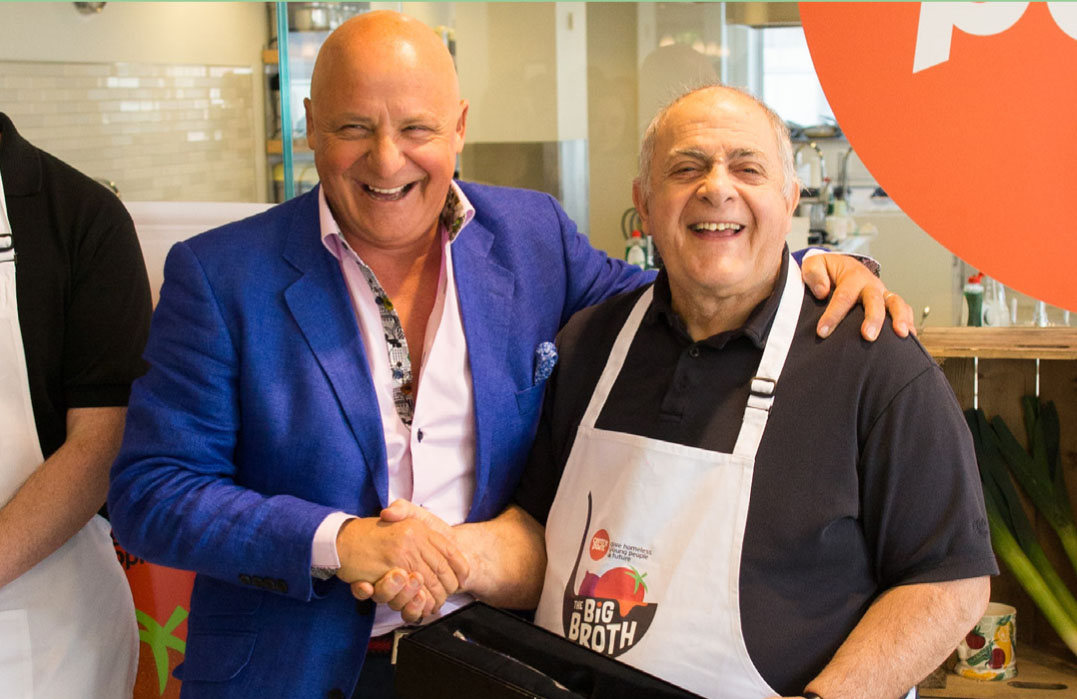 Italian chef Aldo Zilli (left) and Big Brother finalist judged Centrepoint’s Big Broth comp. Here’s why: “I was 17, in Munich in Germany. I left my village as there was no work. I ran out of money after three days and had no choice but to live on the streets. I ended up sleeping rough. The cold was the worst thing and people ignoring you. The experience of homelessness has driven me all my life, the fear of that ever happening again.” Big Broth winner, (right) Omero Gallucci’s Red Pepper and Chorizo Soup will be made by Yorkshire Provender this autumn, with 20p from every pot sold going to fund Centrepoint’s work with homeless young people.

In the recent cold spell, emergency shelters were opened in central London but the numbers far outweighed capacity. In March, Streets Kitchen took over Sofia House at 204 Great Portland Street, a building that had been empty for five years, in a bid to save lives.

The Pavement’s Ian Kalman reports: “I visited the premises twice. The last time the population had grown to over 160 people. I observed as a new person entered, where they came from did not matter: they were offered clothing from the Sofia Solidarity Centre, which also set up a free shop and provided food and drink. They were treated as human beings. This was an illegal occupation of a building, so of course the owner sought an eviction notice, and it was granted. The only mercy was that the judge stated that it should not commence until after the next cold spell.”

“We also had guerrilla paramedics at Sofia House and took two people to hospital who had pneumonia, but didn’t know how ill they were,” adds Jenny from Streets Kitchen. Several celebrities also visited the Sofia House squat, including Susan Sarandon.

Streets Kitchen is a grassroots organisation based at 48 Seven Sisters Road, near Nag’s Head market, Holloway, N7. It is open 11am–2pm daily for lunch, and usually serves 50 people. On Tuesdays it’s women only.

Libraries in Islington and Norwich now offer free sanitary products with no questions asked. Find the form at the library and then select what you'd like. The scheme is funded by a new organisation, the Tricky Period, which aims to help homeless women and women and girls from low income households.

Crisis is one of the seven charities that Prince Harry and Meghan Markle have asked people to donate to as an alternative to a wedding gift. Chief Executive of Crisis, Jon Sparkes, said the organisation was “hugely grateful” that the couple, who marry on 15 May in Windsor, had picked Crisis.

He added: “Donations will help us to support more people to leave homelessness behind through our housing, employment, education and advice services across the country, and to campaign for the changes needed to solve the homelessness crisis once and for all.”

Listen to our team of From the Ground Up peer journalists talk about their experience of homelessness.

In April, Groundswell, the homeless health charity and the Pavement partner in From The Ground Up peer reporting project, moved from Vauxhall to Brixton. It’s now based in a former famous gig venue. The new address is Groundswell, 6th Floor, St Matthews, Brixton Hill, Brixton, London SW2 1JF. New phone number is 020 7725 2851.

The Homelessness Reduction Act came into law on 3 April 2018 making it a legal duty for councils to assist eligible homeless citizens. It arrives at a difficult time for cash-strapped councils, who will need to engineer ways to manage the increased cost, despite major funding cuts to their budgets. The draft for the Act was written up by the homeless charity Crisis. Polly Neate, the Chief Executive of fellow charity Shelter, praised the new law saying: “It will mean a wider group of people will be entitled to help from their councils, and earlier, which can only be good news.”

But some councils are hesitant to celebrate. According to Inside Housing, Camden Council is fearful of an increase in legal challenges against the council due to the “opaqueness” of the Act’s guidance, saying it “neglects to define key terminology.”

The Homelessness Monitor, an annual report into homelessness across England, has said that based on current trends more than 100,000 homeless households will be living in temporary accommodation within the next two years.

The report argues the increase in use of temporary accommodation is due to a lack of social and private rented housing across the country.

Often families find their temporary home excessively far from work and school. In the past eight years temporary accommodation use has rocketed by 61 per cent, seeing a 39 per cent increase in council spending on this form of housing.

All proceeds from the campaign will go towards the frontline services of the respective charities. Scottish Housing News says The Hunter Foundation has pledged to match 40 per cent of the total sum raised and donate it to the charities.

Glasgow has taken place, but you can still join Aberdeen (June 3), Dundee (August 19) and Edinburgh (Sep 16).

The homelessness task force organised by West Midlands Mayor, Andy Street, has been given a boost by West Midlands National Express, reports Birmingham Live. The bus company will offer free travel for homeless people on their buses so they can get to their hostel at night. They can also use the service free of charge in the day to reach benefits or medical appointments. The service will run in Coventry and other parts of the West Midlands with scratch card tickets being provided to all the relevant agencies tackling homelessness in the region, such as the Coventry Salvation Army outreach team.

While homelessness in Britain has increased by 134 per cent since 2010, it has fallen by 35 per cent in Finland over the same time. Finland’s solution to homelessness, as reported by the Guardian, is to provide homes to people who need them. The Government-led project Housing First, views housing as “a basic human right”.

In contrast there is a string of obligations attached to accommodation in Britain, such as unconditional engagement in treatment services. Although many would argue providing free housing will solve little for addicts, evidence from Finland shows the opposite. Engagement in support services is up and recovery rates from addiction are similar to those in treatment-first approaches.

Watch out for Skid Row Marathon, which is due to be screened at more than 100 cinemas on May 9. Set in LA’s Skid Row, which has 4,500 homeless people, it’s the story of a US High Court judge, Craig Mitchell, coaching recovering alcoholics, drug addicts and former criminals at a long distance running club.

“My involvement with the running club gives me a way to impact lives that I cannot as a judge,” says Mitchell at the start of the documentary, adding, “One horrendous act does not define a person in entirety.”

Sock it to them

There are plans afoot for all Edinburgh’s homeless people to be equipped with socks and other accessories to keep warm. What sets the charity apart is that it is run by 11-year-old Joseph Cox. Joseph established Socks for the Street, last year, after hearing that the Bethany Christian Trust was in dire need of socks. His first step was to set up a collection point at his school where people could hand over socks. By spring 2018 Socks for the Street had handed more than 2,000 pairs of socks to the Bethany Christian Trust, and other homeless organisations, according to STV News.

Redbridge Council is working alongside the Salvation Army on an ambitious project to shelter large numbers of homeless people. The £3.4m project was inspired by five-year-old Malachi sending the Salvation Army the money he got from the tooth fairy. Project Malachi will see 40 shipping containers refurbished and used as housing units in Ilford town centre. Each unit will have a bathroom, kitchen and living area. The East London & West Essex Guardian reports that Salvation Army volunteers will also provide support to the residents of the 40 units, which are due to open in October.

It’s taken a year, but the controversial decision to ban housing benefits for 18–21-year-olds has been scrapped. Critics argued that it would lead to an increase in youth homelessness. Meanwhile the Homelessness Reduction Act has become law. The Guardian quotes Shelter campaign director Greg Beales saying he hoped the “powerful change will prevent many young people becoming homeless in the future.”

One brick at a time >