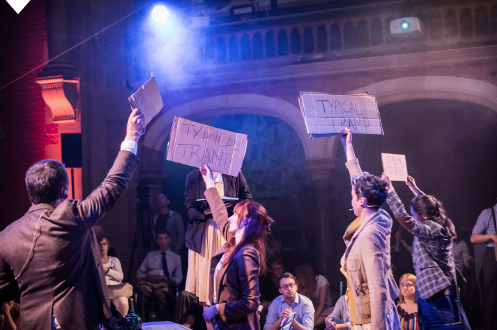 It has also been endorsed by experts in the US, Canada, and Finland who are backing movements to end homelessness in their countries. To succeed 100,500 social homes need to be built each year for the next 15 years. And 18,000 homes need specialised support for homeless people. Crisis is also calling on all political parties to commit to ending homelessness so that everybody who is homeless will move into a safe and stable home within 10 years.

In London Blue Cross offers first-come first-served pet care and prescriptions at their mobile veterinary ambulances. Find them at Highbury Fields, Walthamstow, Islington, Hackney and Southwark. You can also volunteer for Blue Cross Animal Hospital, which is based in Victoria. There are all sorts of roles from fundraising to pet bereavement councillors.

Pavement writers will be at Byline Festival on 26 August running a talk on Unfettered Voices: Homeless People in their Own Words with our columnist Mat Amp chairing. Big thanks to Byline Festival for this fundraising opportunity.

If you want to contact Citizens Advice (sometimes known as CAB) for free help call:

“George Orwell said in his diaries that he wanted to make political writing an art,” said producer Libby Brodie of the Down and Out in Paris and London Live immersive reading seen by thousands. “Theatre is to tell stories and give an idea of that experience. People came and listened (or watched online) and felt, then left with their perceptions changed.”

Additions to Orwell’s words from 1933 included five Stoke teenagers and three men from The Connection at St Martin-in-the-Fields speaking about their experience of homelessness with a knock-out testimony by Peter Mitchell on How it feels to be homeless – maybe the 21st century George Orwell?

Romeo Nanub, 19, from the Pilion Trust, who is learning media skills with Engage London and City University, saw the show and reports: "The scrabbling around trying to get any work and the rough sleeping, these things are timeless.

It was really relatable and sad, especially the boredom. You have nothing to do, so do useless things until the next time when you are busy working again. I'd love to read the book.”

In September, the show will be performed again in Paris. Watch the event online at www.orwellfoundation.com

Since 2009 the number of people living in temporary accommodation in England has shot up by a dramatic 500 per cent. The Guardian reports that avaricious landlords and letting agents are entering the market in record numbers, as they can take between £100 and £300 more when letting their property on a nightly basis compared to long-term arrangements.

A Freedom of Information request by the Observer revealed that 159 providers are “making almost £160m a year from nightly paid accommodation in the 50 worst homelessness hotspots in England.” Despite ludicrous profits, complaints about unsavoury conditions in temporary accommodation persist.

Reports on the deaths of vulnerable homeless people are almost non-existent, new research by the Bureau of Investigative Journalism has found. A series of freedom of information requests made by the Bureau reveal that only eight safeguarding adults reviews had been opened since 2010. These reviews are set up to determine whether a death could have been prevented. Since October 2017 at least 102 vulnerable homeless people have died, and not a single official review has been launched into 83 recent deaths. Without these reviews officials will struggle to understand the causes of death and fail to address the problems suitably.

People living in temporary accommodation in Hackney has reached a 12-year high, and the cost of housing homeless families in temporary homes has broken the £35million threshold. The Hackney Gazette reports that 2,700 households in Hackney are now registered as homeless.

The number of private rent properties has ballooned in Hackney over the past 30 years, while over the same period the borough has lost 10,000 council homes. As a result, the council has put more and more people in hostels or B&Bs. Spending on temporary accommodation has consequently increased from £9.4million in 2010–11 to £35million in 2015–16.

The number of people under the age of 25 sleeping rough has increased dramatically, with Centrepoint estimating the figure grew by a third between 2016 and 2017.

But council efforts to help young homeless people are being harmed by welfare reform, according to a poll by Centrepoint. Inside Housing published details of a report by the charity that warned homelessness will continue to rise unless the Government addresses the problems in its welfare policy. The report called for an increase in the Local Housing Allowance rate for young people, with an overwhelming 89 per cent of councils surveyed supporting the proposal.

See help in the centre of the List (Scottish readers)

Look out for new research from 10 peer researchers working with St Mungo's Recovery College who have tried to identify why some people return to sleeping rough after time off the streets. The new report, On My Own Two Feet, includes 11 recommendations for the Government, local authorities and homeless service providers. It was published on 2 July.

The Guardian ran a front page story about the rise in homeless people facing fines, criminal convictions and even imprisonment for rough sleeping and begging. Although the Home Office told councils not to target homeless people at the start of the year, more than 50 use public space protection orders (PSPOs). PSPOs prohibit homeless people from town centres and begging. Since 2014 around 51 homeless people have been convicted of failing to pay a PSPO fine, occasionally resulting in criminal behaviour orders. It was PM Theresa May who introduced PSPOs as Home Secretary in 2014.

Find us a home

Streets Kitchen must move out of its temporary home in 48 Seven Sisters Road, N7 at the end of August. Open from 11am-2pm daily, the grassroots group reckons it supplies 1,000 meals a week. “It’s sometimes standing room only it’s so busy,” said Jon Glackin. “If any bigger buildings were handed over to us, we could end homelessness overnight.” It’s possible he’s thinking of the now closed Holloway Prison which has not yet been taken over by builders for redevelopment.

If you know a suitable property, tell Streets Kitchen or email info@streetskitchen.org