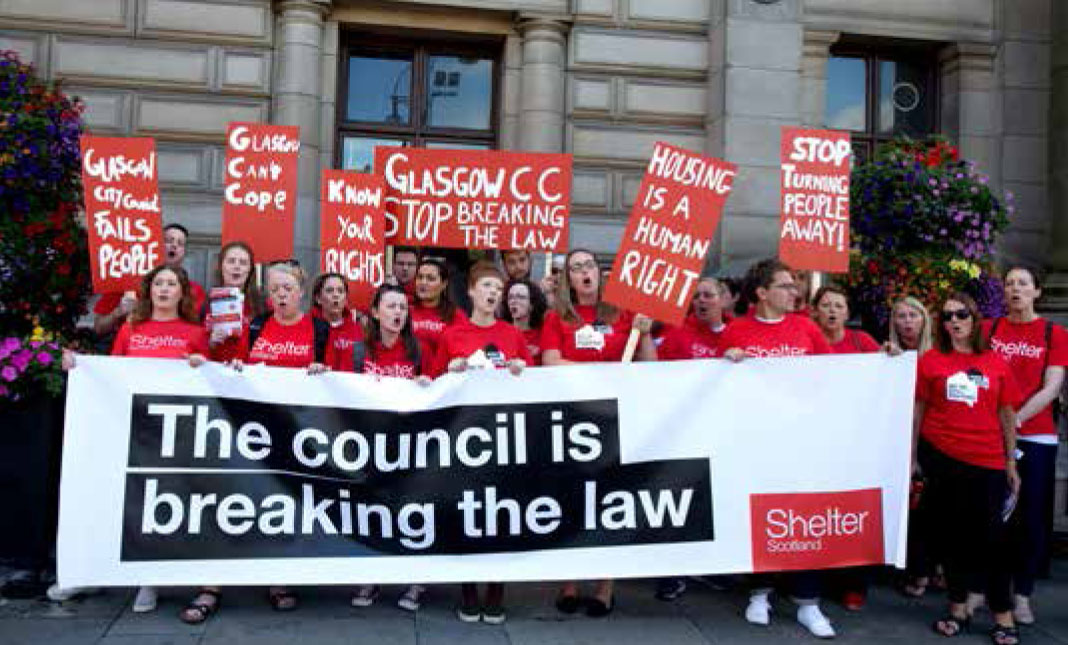 Shelter Scotland organised a protest outside Glasgow City Council, accusing it of negligently ignoring people facing homelessness in the city. The protest follows a report by the housing charity that criticises the policy of ‘gatekeeping’ homelessness services. Gatekeeping refers to local authorities blocking access to homelessness services people have a legal right to. Between July 2016 and November 2017, Shelter Scotland logged 370 cases of gatekeeping from across Scotland. The report was submitted to Glasgow City Council in January 2018, but by early July Shelter Scotland had still not had a response.

The new Housing Minister has previously championed policy that makes life “more uncomfortable” for people sleeping rough, according to Huffpost. Kit Malthouse, the former deputy leader of Westminster council, was promoted to the front bench following the resignations of David Davis and Boris Johnson. But as deputy leader in 2004, Malthouse oversaw a policy of intolerance that included asking people to shift their beds in order for street cleaners to hose the spot down.

The Scottish government will provide an extra £21 million in funding for the Housing First scheme, which aims to move rough sleepers and those living in temporary accommodation into permanent housing, reports The Big Issue. Housing Minister Kevin Stewart says the funding will go to homeless organisations and local authorities, and hopes it leads to significant change. “This funding will ensure we support people at times of crisis, while also taking an important step towards transforming the system,” Kevin told the Scottish Parliament following news that homelessness applications in Scotland had risen for the first time in nine years.

In June the Mayor of London, Sadiq Khan, published City Hall’s first ever Plan of Action to tackle rough sleeping, demanding the Government invests £574 million over five years to provide a longterm, sustainable route off the streets for all rough sleepers in the capital. London now has £11.1million for rough sleeping services, of which an extra £3.3 million will be directly managed by City Hall. With this, Sadiq plans to double the number of outreach workers in his London Street Rescue team; boost local cold weather shelters with a £600,000 small grants programme; expand the No Second Night Out service and improve access to mental health services with a specialist team to assess rough sleepers.

Welsh charity The Wallich is taking inspiration from local government in Fort Worth, USA, to help people off the streets. The Texan city employs two rough sleepers to help clean its streets, and The Wallich has asked the Welsh Government to explore the possibility of hiring rough sleepers for council jobs. Although the Welsh government was swift to reject the litter-picking idea, citing their focus on housing, The Wallich told the BBC it hopes this doesn’t rule out opportunities in other capacities, arguing Government would be setting an example to private sector employers if they hired rough sleepers.

Since June, Streets Kitchen, serving meals from its temporary home in Seven Sisters Road, N7, has been registered as a company. Streets Kitchen opted out of becoming “a registered charity because it would have meant giving up our right to be vocal about homelessness, including lobbying against government policy that could have a detrimental impact on the UK’s homeless.” Despite Streets Kitchen looking for a new home, it plans to run a festival in September.

Emmaus Lambeth and Surrey homeless charity residents, known as companions, will be fundraising in September for the Pavement during a 24-hour cyclethon on exercise bikes at West Norwood. “The Pavement has done so much good work for the homeless, and within the last few years two of our companions actually had their articles published in copies,” said fundraiser Glen Ferns.

Government figures published in the Guardian reveal that the number of children in temporary accommodation across England has increased by almost 80 per cent since 2011. A total of 123,130 children found themselves in temporary housing in the first quarter of 2018, a number not seen since the 2007 financial crisis. The figures released by the Ministry of Housing, Communities & Local Government, also show households in temporary accommodation had risen to 79,800 in the first three months of 2018, a 56 per cent increase on 2010.

A homeless man has embarked on a four-month trek of 2,000 miles around England’s coastline for the charity StreetVet. Phil Bradshaw’s dog had a tumour but he couldn’t afford the £800 veterinary surgery bill. Step forward StreetVet, which successfully performed the surgery for free. Speaking to the Herts Advertiser, Phil said he felt “the weight of the world” had been lifted from his shoulders after his dog Lucky came through.

You know that bloke going around the West End giving out £50 quid? The one nobody knows what he looks like, but one day just might give you all that cash?

He doesn’t exist, even at Christmas.