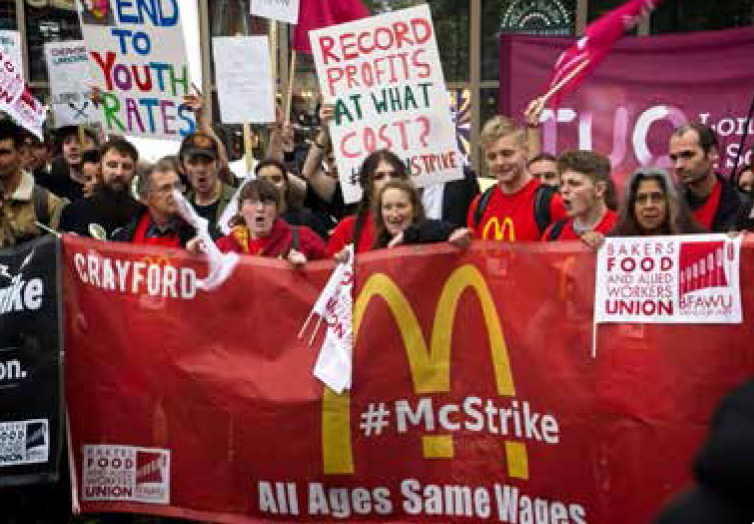 McStrike: Co-ordinated strike action by workers on zero hours contracts in Leicester Square, London in October 2018 © Garry Knight (www.creativecommons.org/licenses/by/2.0)
Young, gifted and… back at home. Is getting organised at work a route out of homelessness? Report by Anne Cooper

Young, gifted and… back at home. Is getting organised at work a route out of homelessness? Report by Anne Cooper

You’ve got your apprenticeship or degree and, as Nina Simone wrote in the civil rights anthem Young, Gifted and Black, during the optimistic days of ’69, “There’s a world waiting for you.” Yet for many young people today this quest means negotiating exorbitant rents, low pay and precarious employment, and for those with the ‘privilege’ of a university education, being saddled with debt.

Market rents in London are an average £748 a month per room, that’s the equivalent of 72% of the National Living Wage if aged 21– 24 or 68% if over 25. It’s hard to see how anyone can rent, pay bills, travel and eat. If income is steady, it can just be done, but young people tend to be in part-time work, on shortterm or zero-hour contracts.

Meeting people to find out how they manage proved difficult. Precarious work means precarious lives. It means sofa surfing and squatting, sometimes resorting to the streets, it means hunger and sleepless nights.

When Alice, a barista, was asked: “Do you know anyone under 30 in low-paid or precarious work struggling to get a place to live?” Her frank answer was: “I think myself and everyone I know pretty much fit into that category.”

This is supported by available figures. Low pay, as defined by The Resolution Foundation, is “less than two-thirds of the national median...” According to their 2018 report 42% of 21–24-year-olds and 22% of over 25s are receiving below the National Living Wage.

It’s not just low pay that is an obstacle to securing a safe and permanent home. A report by the Department of Business, Energy and Industrial Strategy in February 2018 states: “Those involved in the gig economy were more likely than the population as a whole to […] live with parents, family or friends either rentfree or paying some rent…” 56% of those in the gig economy are aged 18–34 which may explain some of these trends.

Nor is it just practical difficulties that impede meeting people in these situations. There are feelings of guilt and shame. When I spoke to Siobhan, she admitted she felt “pretty depressed most of the time,” then burst into tears saying: “It’s so hard, either I have to work late in a bar or 16 hours a day in an office. Either way I can’t afford a room.”

I ran into Miguel, who works at a market. He greeted me cheerfully yet when I said: “How’s it going?” Head lowered, he replied: “I had to move back home...” He explained he couldn’t afford rent, he’d tried squatting, but it became a full-time struggle with no time for anything else. He felt he had failed.

But it’s not young people who are failing; it’s this society that does not provide for them. There’s no access to social housing, while the Government target for the National Living Wage is 60% of median earnings by 2020, below the definition of low pay, which is little consolation for those without a home.

These strikes and protests involved large numbers of energetic young, multi-ethnic women and men, many of whom, by virtue of precarious work, are precariously housed or homeless. With an estimated 55% of homeless people working, getting organised at work may well be a route out of homelessness.

3. If you are low paid, on zero hours, homeless or in a precarious housing situation, join a trade union, eg United Voices of the World www.uvwunion.org.uk or International Workers of Great Britain www.iwgb.org.uk