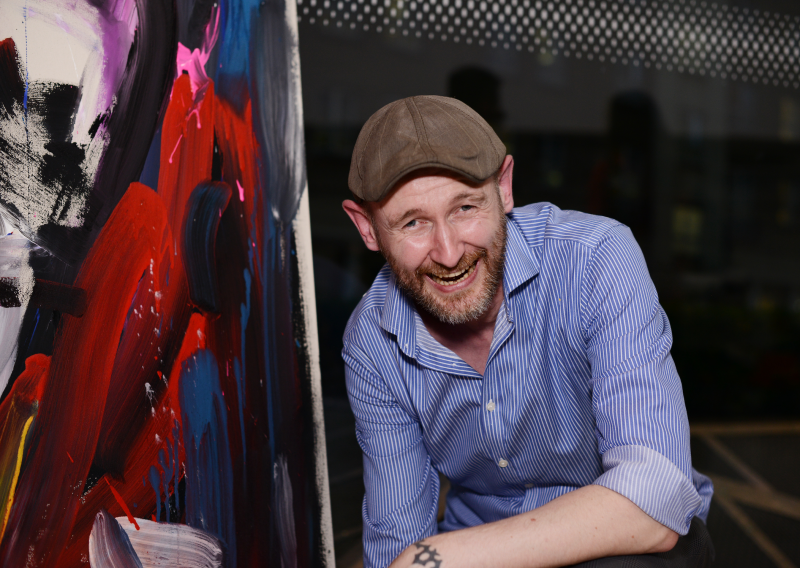 Changing lives: Striking art is guaranteed at the One Festival of Arts which is put together by David Tovey, writer of Man on Bench Fairytale. Submissions from artists who are, or have been homeless, are needed in September, see onefestivalofhomelessarts.com © Lucy Morris

This year’s One Festival of Homeless Arts, set up by David Tovey, takes place in Glasgow, London and Manchester. Interview by Jaqueline Messih

The One Festival of Homeless Arts exhibits art from all over the country, created by artists who are or have been homeless. David Tovey, is the man behind the concept and with the help of The Old Diorama Arts Centre in Camden, launched the festival in 2016.

Initially planned as a one-off event it has now been successfully running for four years and been seen by more than 4,000 visitors. Artists have the opportunity to sell their work with 100% of the proceeds going to the artist and there is no entrance fee. David is multi-skilled artist working in theatre, film, painting, photography and installations and considers his work as “socially engaged art”. David was homeless at the time of launching the One Festival and hopes to bring positive change to other artists.

This year the event takes place in Glasgow, Manchester and London. The exhibit will showcase a selection of art from theatre, film, sculpture and photography. David says: “The aim is to change people’s lives and perception of homelessness”. David maintains it’s more than just putting a painting on a wall, it falls deeper, instead it humanises the person behind the painting, removing the label of “homeless artist” to “artist”.

Jamal was homeless when David asked if he would submit some of his art work. After agreeing, David invited him to the exhibition to witness his work on display. Special guests were invited, local business and universities. After encouraging Jamal to speak about his story and introducing him to guests, Jamal was offered a job with Ted Baker in the design department. David says, “I never expected the festival to change someone’s life, I’m happy now, that was enough for me."

“It's empowering a community and showing another community how much talent and great people there are. They’re not being judged for who they are. They’re being looked at for what they’re doing,” he says. David fondly recalls a middleaged lady who was displaying her work for the very first time. “Her demeanour changed and all of a sudden she was standing tall, having her picture taken with guests and relishing the compliments coming her way. Very rarely did this lady leave her room and she had never been across the river until that day. The recognition changed something in her and in turn, the viewer,” says David.

“The whole point of the show is for people to engage with homeless people and to see we are all the same, because if I can do that, then suddenly there is more empathy and it’s empathy that can change the mentality of the viewer.”

Homeless art has never really been archived throughout history and David says showcasing this art can provide a glimpse into the times we live in and represent a part of society that is usually shunned out. David says: “I want to change people’s perceptions on how they view homeless people or how they engage with them, often people think a homeless person has given up or left society, the truth is society has turned its back on them.”

• David is ready to pass on the baton and for people within the community to step-up and run the show. Get involved www.davidtoveyart.co.uk
• Deadline to submit work is in September, see onefestivalofhomelessarts.com