Hostels: How was it?

What are your feelings about staying in hotels or night shelters? Interviews by Claire Rivers

MEET Richard: “There are different types. The charity sector ones, which mostly run for single homeless. If they find you having relationships, you’re out the door. The private sector runs differently – going into each other’s rooms; people having a drink in someone else’s room – they’re quite happy about it. But where they do let themselves down is the buildings. I was literally in a bathroom with the bath taken out and a bed put in its place.

"I was hospitalised – there was no heating, and lots of things going on. I explained that to the doctors in the hospital, and while I was there overnight, two other residents of my hostel were admitted on the same ward as me, and they said the same thing. That’s three of us out of a ward with eight beds. So, I said to the doctors 'Now do you believe me?'

"Because I had relating health issues, I went to see my GP, explained the situation to them. They issued a safeguarding arrest at the hostel. The Local Authority got involved, and within two days I was moved.

MEET Lisa: “I did stay in a shelter – it was OK. All different women, and there were folding beds, and it’s OK. I get on with people. I don’t complain, I just put up with it.

"I do feel sorry for people. I was reading the paper, the Middle East news. I saw these three children, and their Mum, had passed away in Syria. They were going to a shelter, but the middle girl – there were two brothers; one older and one younger – was shot in the chest. She died instantly. And the younger brother was only about 9 or 10. I just felt so sad. He’s never going to get his sister back.

"I wonder what happened. I would have liked to help. See what happened – they were going to go to shelter, and she got shot in the chest, and died.” 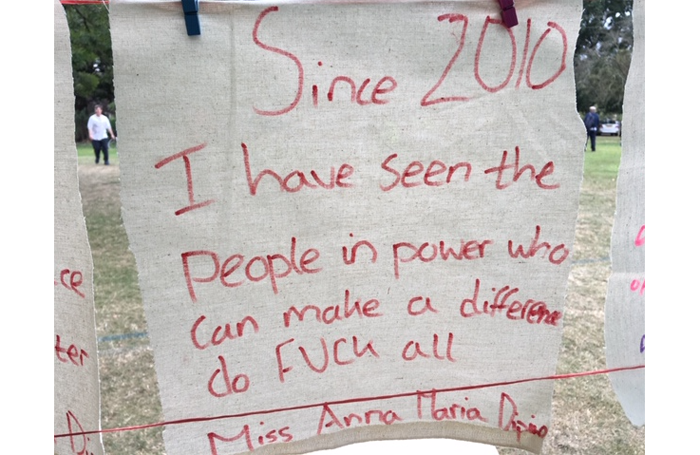 Left out: One of the messages left by a homeless attendee at
StreetFest 2019, see p30. © Jean Hindry

MEET David: “Night shelters are difficult places… it’s quite an angry vibe. The ones I’ve stayed in, they’re high dependency, drink, mental health – and everyone’s put in the same room so it can cause a lot of friction. It can be quite scary. This is why so many entrenched rough sleepers don’t go back into night shelters.

"I stayed in a really good one. The food was great; the staff were brilliant, but it was only open seven days because it was a cold weather shelter, and then they moved me to this other shelter and it was the most awful place I’ve ever been into. There were people shooting up at breakfast.

"They put me into this room where someone had smeared human shit down the walls. I went ‘Can’t you put me into a clean room?’ And they went ‘We can’t afford cleaners. You’re gonna have to clean it yourself.’ In the end, I moved out of there and moved back into my car.”