Too good to be true?

If you know an employer is dodgy, please speak out. We have to stop these modern slave traders exploiting homeless people

Stop the Traffik’s job is to prevent human trafficking worldwide. The campaigners asked 180 people who were rough sleeping, homeless or using homeless services in Greater Manchester about exploitation. Shockingly the report, published in November 2019, reveals how almost 30% of the respondents had been offered drugs, alcohol, food or accommodation for work, in lieu of a real wage. Stop the Traffik found that young people, women and immigrants experiencing homelessness were most vulnerable to exploitation. And it might happen to you: almost a quarter (24%) of those surveyed said they had not been paid promised wages, while a further 17% had known someone to go missing after accepting an offer of work.

This is a nationwide problem and homeless people are often these exploiters’ targets. Over the past two years the Modern Slavery Helpline has had reports of 353 people who were homeless before, during or after being exploited.

“We’ve seen modern slavery recruitment happen at church events like soup kitchens because they are regular and a place people congregate,” says Caroline Barnard who is communications officer at the Church of England. “The crisis in housing is so big that housing and homelessness staff and volunteers are not always looking out for more problems, that’s why modern slavery is not on their radar.” 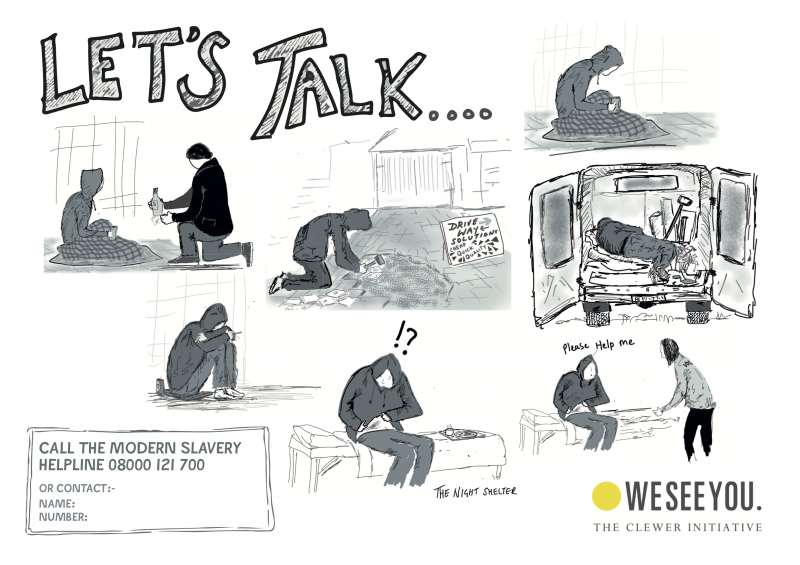 So, when someone drives up with a van offering casual labour, they may not be telling it straight. “Modern day slavery is about people being exploited and abused. If the offer of a job sounds dodgy it probably is. Don’t accept jobs which come with accommodation and alcohol or drugs, or promises of what you need, as they will never materialise. The accommodation will be a caravan or a tent and there will be no pay,” warns Barnard.

• More about what’s happening in Manchester:

< the Pavement needs you! Help with Universal Credit >