A snapshot of Friday at Croydon’s Crisis walk-in. Interviews by Elizabeth Mcmanus (EM) who lived on those streets for a year

It’s only 10 am and already the lobby is filling up. Everyone looks tired and cold. They all carry a rucksack or suitcase, or both. Receptionists hand out a welcome cup of tea.

JOE is 41 and has been a Croydon resident of 30 years. He has been sleeping rough since coming out of prison in November last year.

EM: I see you are wearing a U2 T-shirt, are they your favorite band?

Joe: "Not really, the church where I stayed last night gave it to me. Croydon Churches Winter Shelter is in a different church each night from November to March, some are a bit of a trek. I have to get there before 8pm then I get a hot home cooked meal, warm drinks all night and snacks. I get a camp bed and clean quilt and sheet. I had a great sleep. Everyone – all volunteers - was so warm and friendly. In the morning I woke at 7am, packed up my bedding into a bin liner, so I know it’s mine for tonight. Then a cooked breakfast and at 8am we must leave."

EM: How many people slept there?

Joe: "Ten men and four women. The shelter is given names by the council or outreach. I told outreach I had no fare to get to the church last night and they put money on my Oyster card. Outreach also said that I will get moved on from the shelter into somewhere a bit more permanent. Most people do end up with a place to stay when the shelters close in March. I hope to be moving into a hostel like the YMCA or such like, moving on with my life." 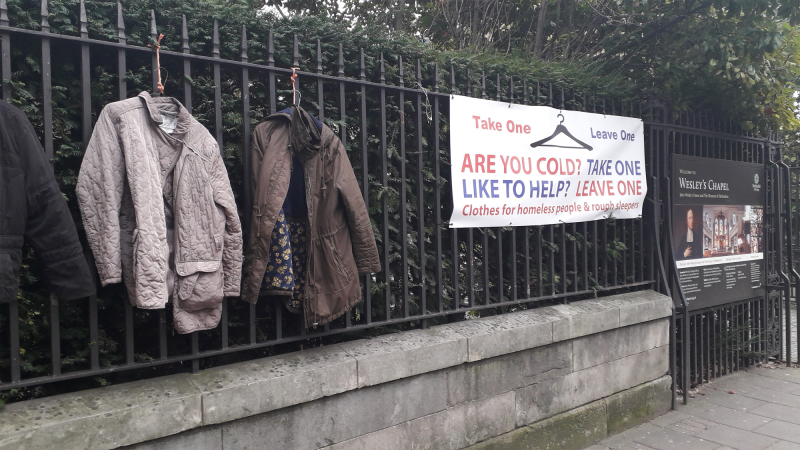 Pop up coat rack: Take one, leave one on London railings. © Pavement

Meet MARTIN: “I’m 42. I have never been homeless before, but I left my home to my ex wife and kids and walked out. I am an alcoholic and she couldn’t take it, so I left before she threw me out. Every day I come here for a hot drink. Sometimes I do my laundry. I can have a shower or just a wash. I’m sleeping at the Croydon churches winter shelter.”

EM: What does the phrase ‘moving on’ mean to you?

Martin: “I was moved on by the police yesterday. I was doing a bit of ham and egging, you know begging. I was sitting outside Aldi in west Croydon. Anyway, I had only been there about 20 minutes when the coppers turned up. I ignored them while stashing my begging cup under my leg. They asked: ‘Exactly what is it you are doing then?’. See how they try and trick me because it's illegal to beg. At this point the manager ofAldi came out and told the copper that I was harassing his customers for change. He wanted me to move.”

EM: What did you say then? Martin: “I told all three of them I was not begging, I’m just having a rest. But the copper saw my cup under my leg and went to pick it up, but I was quicker and I got it first. He asked me if I had been using the cup to beg with. I said: ‘I’m not begging’. Having a ‘receptacle’, as the law calls it, is a separate offence to get nicked for! I think it was only added to the vagrancy law last year.”

EM: Is that a criminal offence?

Martin: "Yes, it bloody well is, just so the court can give you more time in jail and more offences to charge me with. The copper then told me I need to be moving on. I went somewhere else and started all over again."