Can you hear me?

When the isolation started many organisations came up against one big hurdle to overcome. How do they engage their members/ clients during this time when face-to-face work was impossible?

Cardboard Citizens, who make theatre that activates change, decided to try Zoom as a way of continuing their workshop programme. Joint CEO and Creative Director Adrian Jackson said: “We knew our members needed to do something, and we wanted to supply something to take their minds off the lockdown.”

The first project was called London on Lockdown (LOL), Mr Jackson facilitated it using Daniel Defoe's book A Journal of the Plague Year as a springboard. “It was surprising how many members wanted to be involved. It became the highlight of the week,” he said, adding that he really enjoyed checking in with the members.
The members liked it too, saying: “It gave me structure”; “It gave me something to do” and “I really looked forward to it”.

The first LOL workshop was an experiment to see if a Zoom workshop could work, and as it proved a success an Impro workshop was run and a regular Friday gathering in the form of a check-in.

As social distancing makes it hard to know what the future holds, more Zoom workshops are planned, so if you are interested contact: 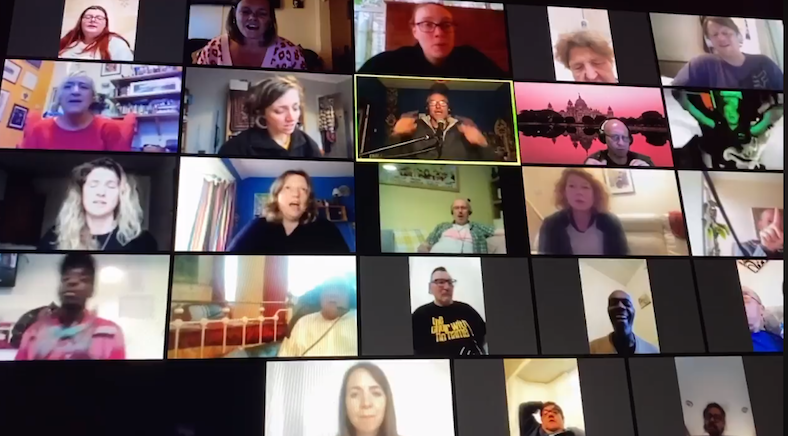 Let's sing: screenshot from The Choir with No Name’s Birmingham Zoom rehearsal. Normally the charity works with more than 1,000 vulnerable adults and has around 240 regular choir members. Due to lack of internet access this dropped to between 50-60 attendees joining the four rehearsals held weekly in London, Brighton, Birmingham and Liverpool. If you have internet you can join on Tuesdays at 2.30pm, details are at www.choirwithnoname.org/online-workshops or email emaq@choirwithnoname.org. Expect to sing favourites such as This is Me (released as a charity single in 2019) and the soul classic Ain’t No Mountain High Enough. “We are working hard to overcome barriers to access through providing devices, data and training to members who are the most isolated,” says Rachel Clare from The Choir with No Name.
© The Choir with No Name

< Will anything change? Behind bars >