Try a new way to get a job. Interview by Jacqueline Messih (before lockdown)

“We are Radical” is the slogan behind a pioneering recruitment agency shaking things up in the recruitment industry to secure employment for the underdog. Emma Freivogel is the co-founder and CEO of Radical Recruit and advocator for changing the way businesses source and employ hidden talent.

Emma explains this social recruitment agency in London works exclusively with, “Anyone underrepresented in the labour market, that includes homeless people, exoffenders or people who have left the care system. Our candidates come to us because they want to regain control over their lives, have financial autonomy and the choice to live how they wish”.

Emma has a vigorous screening process that requires candidates to speak openly and honestly. The average time it then takes to place a candidate into a suitable job is eight weeks. To date Radical Recruit has secured 30 placements, including a chef, web developer and restaurant manager. Candidates receive support developing their CVs, are offered interview preparations and techniques, confidence building, disclosure workshops and life and job coaching.

Success story
For seven years Malcolm found himself living on the streets of London after he started self-medicating with alcohol and the family divided after the loss of his father. Struggling with mental health and homelessness, Malcolm considered ending his life. In 2017, while sitting in a police station Malcolm decided he would try and get a job and take back control of his life. After two years unsuccessfully handing out his CV, Malcolm was put in touch with Radical Recruit and at his first interview with Honest Burgers he was given a contract to sign. In April Malcolm was still working for the company.

Radical Recruit works with people in all levels of criminality from petty crime to murder. More than half of female prisoners are victims of domestic abuse. Some prisoners have failed to pay their TV licenses, others have mental health concerns or learning disabilities that have not been identified or issues related to drugs and alcohol. Emma believes her candidates have life experience that is transferable to the workplace. “They have resilience, determination and grit that you cannot teach in the classroom or on a job”. We try to seek out their potential, help them see their potential and help employers see what we see”. 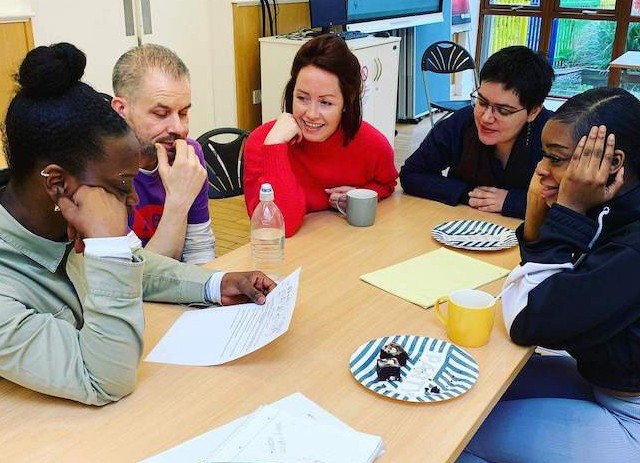 Radical Recruit helps people disadvantaged by their life experiences to get a job. Photos taken before lockdown and social distancing. © Radical Recruit

Each candidate has a story to tell and Radical Recruit helps them to tell their story. “Imagine being judged for the worst thing you have done in your life? We’d all be damned,” says Emma. “But most of us don’t have to, we’ve all been guilty of bad decisions that have hurt others or ourselves, most people get to move forward. And those with a conviction are not allowed to move forward even though society demands they be better citizens”.

Emma’s greatest undertaking has been changing the way employers think. “We find employers that want to turn their commitment to diversity, equality and inclusion into action. It’s no use giving someone a job because you feel sorry for them. We want to elicit systemic change. We are changing the way employers think about people with convictions, people who have experienced homelessness and young black men. We accept people who are essentially denied the right to work.” Once a candidate has been matched to a job and offered a role, Radical Recruit continues to support them in their employment.