How a story about hope helped Deputy Editor Mat Amp rebuild his life.

So much of the stuff they try and ram down our throats at school is drab, irrelevant and about as inspiring as a wet Wednesday. Stories have always been my thing, whether they be factual, fictional or, somewhere between the two – historical. Occasionally at school a story would come along that had something powerful enough to stay with me. The myth of Pandora’s Box is a perfect example. There are several versions but basically Pandora has a box that contains all the virtues. When she carelessly leaves the lid open, the other virtues – such as mercy, freedom and peace escape, leaving humanity with hope alone.

Oliver Sacks, a neurologist way ahead of his time, had a friend who, after doing the drug PCP (angel dust), developed the ability to tell when people were angry, amorous and even deceitful. Sacks surmised that this was some sort of primal ability to ‘smell the truth.’ This peculiar superpower disappeared after a month, much to the friend’s relief. Oliver Sacks’ conclusion was that our minds had learnt to hide this ability from itself because in order to develop the type of trust that civilisation is built on, we must be able to deceive each other.

The process of developing trust may feel uncomfortable when you’ve been let down in the past, but it’s what makes us human. It’s also what makes relationships so valuable.

Blind faith and slavish devotion are the so-called qualities demanded by extreme cults, religions and hardcore political groups. Free from the scrutiny of reason, organisations are free to abuse people’s faith, dismissing the need for hope with the promise of eternal bliss in the afterlife/future.

Similarly, homelessness is a condition that disconnects you from the rest of the world. It also limits your choices, often creating the impression that there is nothing left in mainstream society for you. That’s why recovery from homelessness is as much about believing society is worth recovering for, as it is about thinking you’re worth it. 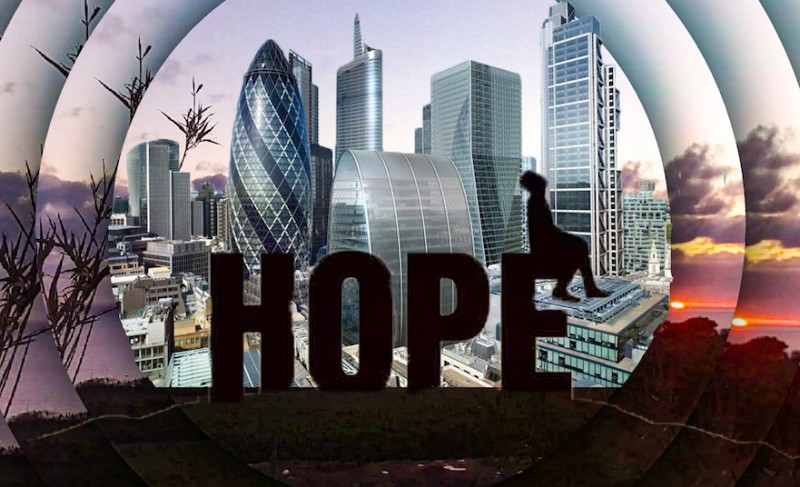 But where do you start when it comes to rebuilding trust with others? How do you start to hope, when things have been hopeless?

If not a leap of faith, it takes at least a little step in that direction. For addicts, recovery can be really intense as the drugs leave your system and the illness is replaced by this wave of intense, highlyemotional energy. People with mental health issues, which, let’s face it, is the majority of us, also suffer in this way.

For six months I was a regular at NA meetings, and I remember some people there called me selfish for not engaging more. The more fanatical members put pressure on me to share more of my personal stuff, but I’m not comfortable sharing in large groups so I didn’t.

Hope is vital if you’re going to get back across that bridge from the broken edge, but try not to give too much of yourself, too quickly. Remember there are employment opportunities now for people with lived experience of homelessness. Of course, there’s still stigma and prejudice when it comes to the public’s perception of homelessness, because there are always going to be arseholes, but the move towards consultation and genuine engagement makes me hopeful... and that hope is what keeps me going.