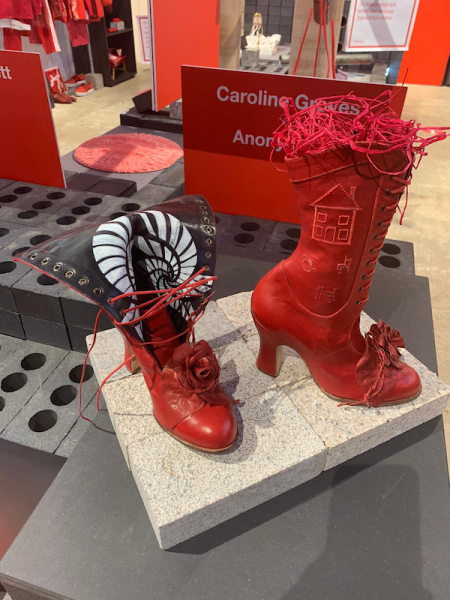 Shoes have names: the Shelter shop in King’s Cross held a unique exhibition as part of London Craft Week in October. The Shoes Have Names exhibition brought together homeless stories with designers from across the world, forming an intricate, intimate collaboration. The exhibition was dreamt up by conceptual designer Jo Cope and Shelter, aiming to raise funds for the homeless charity. The concept was simple: every shoe tells a story. Individuals who had faced homelessness and had been supported in some way by Shelter were paired with an international cast of designers to translate their stories on to shoes. The result was a collection of deeply affecting stories told on dazzling designs. © Pavement

Councillors for the coastal towns of Bournemouth, christchurch and poole (BCP), have failed in their attempts to fine homeless people for sleeping in doorways. The councillors proposed pushing through with

the fines, which were a particularly harsh feature of the council’s already discriminatory Public Spaces Protection Order (PSPO). The much maligned PSPOs, reported frequently in the Pavement, routinely infringe on homeless people’s freedoms and rights. BCP council was working on introducing a PSPO to deter “professional” beggars, in the words of the council’s Liberal Democrat leader Vikki Slade. Slade runs BCP with an alliance of other parties and independents. The Bournemouth Echo reported in early September that efforts to include the punishing fines as part of the PSPO were unsuccessful, in part due to an online petition signed by more than 6,000 people.

Housing Justice, the national membership charity for night shelters, has warned that new social distancing measures in the UK could, in some cases, triple the costs of running winter shelters. Housing Justice fears shelter populations could be cut by up to two-thirds. The Guardian quoted the organisation’s chief executive, Kathy Mohan, saying “cold weather night shelter projects will offer significantly fewer beds this winter”.

Some devastating news quickly followed up by heart-warming news in Manchester, where the victim of arsonists raised more than £70,000 to replace the food trailer they torched. In an attack that police suspect was racially motivated, Nigerian-born David Kamson’s Moston-based food van was burned down in September. Kamson cooks for numerous homeless charities in Manchester, and with the help of more than 6,700 individual donations to his Go Fund Me page, hopes to have a new food van operating soon, the BBC reports.

A bed of tulips

The Tennessean reports on the valiant efforts of the House of Tulip (Trans United Leading Intersectional Progress), a project aiming to create the first shelter for transgender and gender non-conforming homeless people in new orleans, USA. Having raised more than US$400,000 by early October, House of Tulip was set to purchase a multi-unit home in the city as the Pavement went to press. The site will offer accommodation for up to 12 people at a time. The advocate group aims to have the building operating by spring 2021, while co-director of the project Milan Nicole Sherry said she hopes “to have many Tulips across New Orleans.”

Housing First for Youth was set up by The Rock Trust and Almond Housing in September 2017 to provide stable homes for 12 care leavers aged 16–25 at risk of homelessness in West Lothian. Three years on, the project proudly reports that 92% of the young people they've housed have sustained their tenancies, according to the Daily Record.

Analysis from Shelter Scotland had revealed there are about 70,000 children in Scotland on social housing waiting list – equivalent to 20 children in every school and about 40,000 households. Scotland's Housing Minister, Kevin Stewart, was quoted by the BBC bemoaning the "necessary pause" in the delivery of social homes because of the impact of the Covid-19 pandemic. In late August a National Statistics Publication reveaed there were 31,333 homeless households in Scotland in the year March 2019 to March 2020.

New laws and regulations introduced in Scotland threaten to leave councils with a shortfall of emergency accommodation, according to Inside Housing. Up to 1,000 bed Edinburgh council uses on a temporary basis for homeless people will be deemed unsuitable in January, when a law restricting councils' reliance on B&Bs and hostels takes effect.