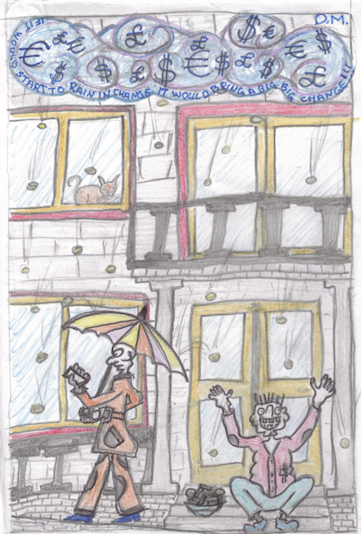 London Mayor Sadiq Khan wrote in inews in November that homeless people “deserve to be kept safe from Covid-19 too”. Thankfully there was a plan of action to support his reassuring words. After labelling rising homelessness a “national disgrace”, Khan also called on the government to scrap plans to remove rough sleeping migrants from the UK for not having permanent residence. Noting the impending drop in temperature, Khan also demanded from government “the funding and support we need to provide more Covid-safe, self-contained accommodation, rather than shared dormitories in homeless shelters, for everyone in need.”

Huffpost UK revealed in November that the government wouldn’t be reintroducing its ‘Everyone In’ policy, which saw people sleeping rough placed into emergency accommodation during the first Covid-19 lockdown that began in late March 2020. Worse still, the Minister for Rough Sleeping and Housing, Kelly Tolhurst, hadn’t made any clear commitment to new lockdown measures to house people sleeping rough over winter. Responding to an urgent question in the House of Commons on the safety of people sleeping rough during the lockdown in November, Tolhurst insisted the government was “dedicating over £700m to tackle homelessness and rough sleeping alone this year [2020].”

In response to calls for more funding, chancellor Rishi Sunak pledged an additional £151m spending on homelessness in the next financial year, beginning April 2021. The day before Sunak’s announcement in late November 2020, English councils had asked for £4bn to tackle an array of issues, including efforts to tackle homelessness.

St Mungo’s, meanwhile, warned of the legacy a £1bn cut in funding for homelessness services since 2008 would have. Sunak, quoted in the Guardian, vowed the government “will do everything we can to support those who have been hardest hit [by the pandemic].”

After the delightful surprises 2020 had up its sleeve, what awaits us in 2021? As Minister for Rough Sleeping and Housing Kelly Tolhurst said in November, the government is committed to ending homelessness. She took to repeating a £700m figure spent on tackling the issue in 2020 alone. But, unsurprisingly, this was a stretch. Huffpost UK estimated £433m of that figure was for a longer term project to create 6,000 new homes for people sleeping rough, an initiative the government announced in May 2020.

It had promised to deliver half of them by May 2021 but was mysteriously unable to share if work had even begun in October 2020. Huffpost UK was able to glean that Communities Secretary Robert Jenrick has apportioned "£9.5m of the loot to Cromwood Housing Ltd, a development company blighted by a track record of renting out fire risk flats." So maybe don’t expect a shiny new story about the project’s impending success in our next issue…

More on the Home Office’s cruel intentions to rush through plans to remove people of foreign nationality sleeping rough from the UK. As the Pavement went to press it was uncertain the Home Office would be successful, with a wave of protest and outrage meeting news of the plans. The Good Law Project organised a coalition of local law centres to challenge the new measures. The coalition say Home Secretary Priti Patel’s proposals are unlawful, and make a mockery of her promise of a “compassionate” Home Office in the aftermath of the Windrush scandal. The groups also said the policy would contravene the European Convention on Human Rights.

Streets Kitchen opened a new Archway branch in December, offering warm meals to the homeless community every Friday and Sunday evening. It’s the latest in a string of new Street Kitchens popping up in London, courtesy of founder Jon Glackin and a small army of formidable and reliably brilliant volunteers. The Archway Streets Kitchen joins others running throughout, and now beyond, the second national lockdown. Find them at Archway, Camden, Clapham Common, Dalston, King’s Cross, Hackney, Haringey, Kilburn, Shoreditch, Stockwell and Tooting. And breathe. Incredible.

A charity for young LGBTIQ+ people was hard at work in lockdown 2.0, back in November last year. akt, formerly known as the Albert Kennedy Trust, was busy helping LGBTIQ+ people facing homelessness in Manchester, connecting them to local services and offering support themselves. In particular akt has been helping young people who are ‘hidden homeless’, for example people staying on a friend’s couch. Assistant Director of Services at the charity, Hayley Speed, told the Manchester Evening News “It’s been difficult to see because they’ve not done anything wrong – it’s because of things out of their control.”

A community of homeless migrants who had set up a camp in Place de la République, Paris, were savagely removed from their makeshift shelter by a violent police force late last year. A brave group of volunteers had linked arms with the homeless people, in a futile effort to block the police’s path. They chanted “papers for all, accommodation for all”, according to the BBC. Police dished out liberal amounts of tear gas and baton beat-downs to disperse them. Interior Minister Gérald Darmanin, reacting to the shocking scenes of police brutality, ordered a report into the law enforcement’s behaviour.

In our previous issue the Pavement reported on Peter Krykant’s mobile drug consumption room fitted into a van. Krykant’s van had a successful trial run in Glasgow in September, and we carried a quote of his that “we need to stop criminalising people.”

It proved prophetic. Just after the Pavement went to press Krykant was charged by police with Section 23 of the Misuse of Drugs Act. Krykant is accused of blocking officers from monitoring the consumption rooms. “I’m surprised at this because there have been regular police patrols passing by and I have chatted away with officers,” Krykant told the Daily Record.

The Period Products Bill passed Scottish Parliament in late November, the final step before it consolidates in law the free provision of sanitary products for those who need them. It’s a huge step towards ending period poverty in the country, when people are blocked from basic, necessary period products because they cannot afford them. People experiencing homelessness are covered by the bill, which was introduced by Monica Lennon MSP.

A new family restaurant opened in Whiteinch, Glasgow over the festive period, will be feeding patrons and the local homeless community alike. The Unit delivers a staggering 500 meals a day to homeless people in the city, according to Glasgow Live. Claire Lilley, who works at the restaurant/social space told the website the The Unit had “made and delivered 475,000 meals to vulnerable families,” by the time the Pavement went to press.

“A lot of people have been housed or accommodated by the council and that’s positive,” says Colin McInnes from Homeless Project Scotland, “but the negative is that they are getting housing but with no support, so are not managing to sustain this accommodation. If they have addictions and don’t behave themselves, they end up losing their place. Cold turkey can kill you: if someone is an alcoholic for 15 years and told not to drink they are setting up people to fail. We find they get barred from everywhere and then there’s nowhere to be put.”
Homeless Project Scotland also runs a free 24-hour hotline which you can call to get somewhere safe to sleep. “We take your call and then call the authorities. We hold the authorities to account and advocate on the caller’s behalf. A person has a right to accommodation, and we’ll assist you to get to that accommodation,” said Colin.