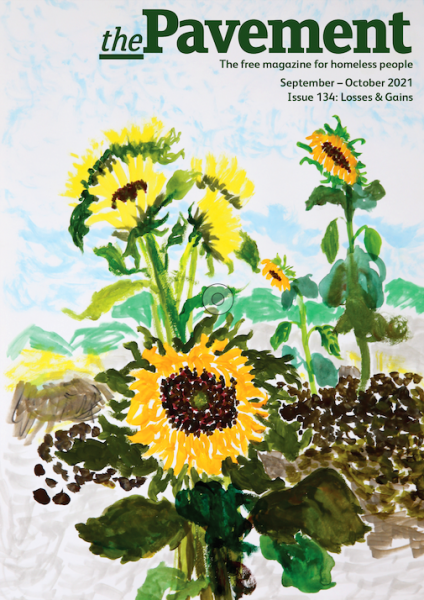 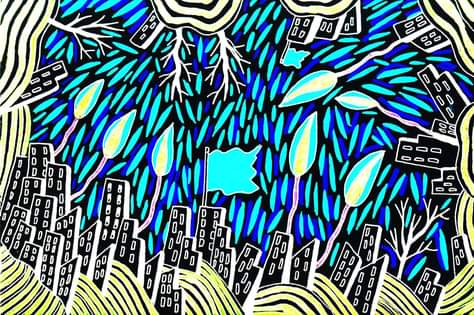 Thanks to regular contributor to the Pavement Chris Bird for sharing this beautiful artwork titled Dream Town. © Chris Bird

I've been here in the Queen Elizabeth Hospital in Birmingham for almost a whole month now, waiting for heart surgery. I've had it cancelled three times in three weeks. The first time it was understandable. When it happened again and then again, it was a terrible disappointment. I had got myself so prepared the night before, you do your nil by mouth, no water and no food after a certain time. You get yourself shaved for surgery.

You're woken up early to get washed. So from six o'clock you're ready, you're just lying there waiting. Mentally prepared. About half eight the sister came in and said she still wasn’t sure they could get a bed for me in intensive care. She said we would know in a bit. She came back within about 40 minutes. And I just knew by the look on her face, she was going to give me bad news. And she did. She just said it's been cancelled. The surgeons and team came up in the evening and apologised. They said it won't be this week now.

There are people in here that have been in longer than me. One chap, he went home two days ago, he'd waited over 10 weeks for his heart operation after it had been cancelled quite a few times. There was another chap and he’d been waiting five weeks. It seems to be the norm at the moment.

There's such a backlog now that this is just going to go on and on and on for quite a while. There are so many people out there that have got more major surgery required than myself. I just feel for them.

And one of the hardest things is having no visitors. Total isolation. I'm in a room on my own at the moment so I've got no one to talk to. The nurses and doctors come in and do their observations. And you have a bit of a chat, a bit of banter. But I don’t think they've got the time. Everybody's been lovely. But they’re very busy. The NHS is so under pressure, they're run off their feet, you can see that. And I take my hat off to everybody in the hospital. Praise to the NHS.

As we’re not allowed to have visitors, I’m lucky enough to have my phone. I would've found it so much harder if I hadn’t been able to talk to anyone outside. I’ve also got my tablet so I've managed to get onto Zoom with Groundswell and Crisis as well. I’ve had some good messages and it’s good seeing these people. They are a blessing to me. I don't know what I'd do without that.. It would be a case of just sitting here waiting, you're not allowed to go out of the building. Total boredom.

The thing I’m most looking forward to when I get home is my own bed! I must admit, the beds here are ok but they're not the comfortablest are they? And a change of scenery and being secure back in your own place. Hopefully, we'll have a nice summer so I'll be able to sit in the garden.

For someone who's been homeless themselves, it's a big thing being able to go home. I've been street homeless and through hostels and everything, I’ve done the journey. But to actually say you’re going home and knowing I've got the key in my pocket, it's a relief. I couldn't imagine what it’s like for somebody who is homeless, they've got that feeling that they're going back to a hostel. My heart goes out to them. I know that I am actually going to what I call home. It is such a relief.

• A week after sharing his story with Giselle, Lee’s heart operation finally went ahead. He is now back at home recovering.