The fuel for connection 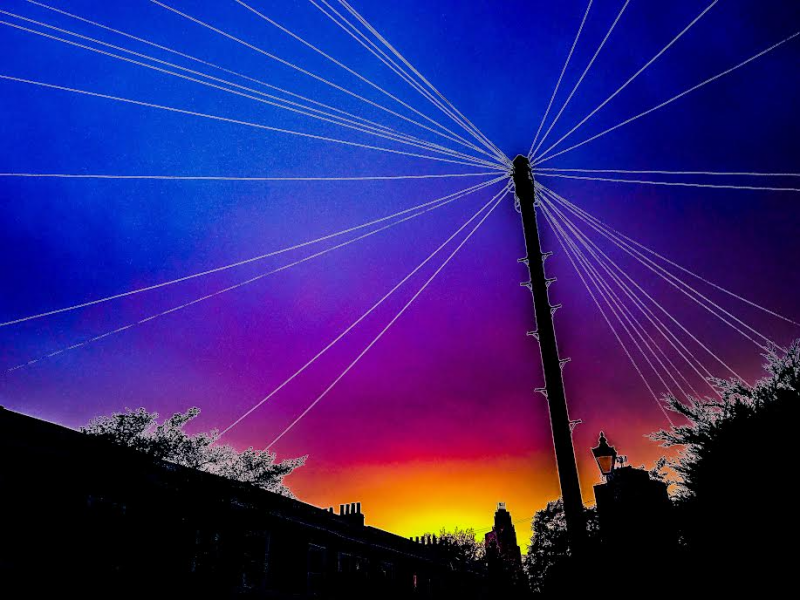 Tackling the disconnection many of us have felt since the Covid-19 pandemic started, Mat Amp emphasises the need to share and empathise with stories

The world has been riven deeper into squabbling factions since Trump was aborted by a reality TV show to stumble and crawl like a big, fat, drunk baby into the collective madness of the basket case that is modern America.

After surfing the febrile identity spark of the gold rush frontiersman straight to the presidential hot seat, he oversaw four years in office characterised by division and recrimination. Brexit turned up the flames before Covid-19 gave us the chance to disagree over some real life and death shit.

The pandemic initially offered us a brief glimmer of hope that, Blitzstyle, our collective suffering would, if not unite us, at least make us a little more willing to listen to each other.

But any hope that existed for a kind, rational and open-minded response to this frightening mutual threat became increasingly difficult as the lockdown robbed us of the connections that generate pleasure, inspire kindness, furnish us with understanding and open that twoway bridge called empathy where that understanding clicks in to place.

Hate crime spiked, domestic violence exploded and we started to argue about everything from cause to cure. It reached the point, towards the end of the lockdown, where I would happily have had the vaccine cut with chilli sauce and injected directly into my eyeball if it would just have stopped the frigging bickering.

Yep, whilst we were hating on each other over our differing opinions on vaccine uptake, for fuck’s sake, the bumbling posh gizzard wobblers in their power seats were rubbing our faces in their collective excrement by flagrantly holding ‘work’ parties. Meanwhile, the rest of us were left to let loved ones die alone. It would have been more forgivable if the parties had been any good, but the fact they were utterly shit is just unforgivable.

To be honest, it’s difficult not to be cynical. Fuck, we probably earned the right to drop out and disconnect and utterly fuck the entire thing up the arse with a barbed wire-covered broom handle from the janitor’s store cupboard.

And it is easy, cut off from everything but TV and computer screens, to see everything through beige tinted specs. You know, those glasses that make everything look like a bubbling cesspit of shite.

But please don’t think I’m somehow advocating for the good old days. I mean, talk about shit parties. Clubs in the UK back in the ‘70s and ‘80s could often be miserable, exclusive places where pretty people went to stand around and pout. They were often stifling places with a snarling joyless narcissism that sucked the oxygen straight out of the air.

My dad is Nigerian, and it was there that I first came across parties that were actually fun. People were connected by the music and the dancing, and the atmosphere was mind-blowing. It was deeply soulful.

My life experience in Africa has fuelled an almost pathological desire in me to connect. To connect experiences, knowledge, places and above all people. My fascination with history is fuelled by a desire to connect different times and places because it shows the way that culture develops through time.

Groups like the Taliban try to wipe the slate clean and rob us of the inspiration and progress of connection to past achievements in both art and science.

Art is a connection to the person who created it, the time and place it was created, the universality of what it represents and above all to our shared humanity.

Conversation connects us through words, dancing through physicality and of course there is music that connects us to a time and place and like art, to something deeper and universal.

There has always been a great underground music scene in this country, with DIY movements periodically exploding from the streets into the nation’s cultural consciousness, such as Bluebeat, Northern soul, Blues, Punk and Acid house.

The rave scene that developed in the late ‘80s was the epitome of connection. It used to blow my mind to see rival football fans hugging each other on the dancefloor, ditching fierce hatreds at the opportunity to connect. No doubt, double dropping for a 250 milligram rush could help get the boat going in the right direction on the river, but it says a lot that people were so quick and eager to trade a cauldron of hate for a beaker of friendship.

There is much of the world that is twisted, but there is so much that isn’t. Rubbernecker syndrome and that awful human tendency to gossip about each other has created this awful, gory echo chamber for the negative and depraved that has been amplified by social media, whilst a lot of the good stuff ebbs on by, often unnoticed.

The answer is to look at the whole picture and seek out connection and understanding by taking an open-minded approach, devoid of pre-judgment. The more we know about people the harder it is to judge them. What better way to do that than to read their stories.

Since I stumbled into recovery from a desperate hazy fog of selfdestructive self-loathing in around 2015, I’ve found myself involved in the sharing of stories.

The sharing of stories is one part of a holistic approach to the recovery from homelessness. Stories humanise us. When someone tells their stories it becomes harder to pigeonhole or constrain them with lazy stereotypes.

It’s like the Pavement. It’s all about communication and connection. One of the major roles of this magazine is to give us something that is ours as well as a focus for this community that we are part of.

Currently I’m involved in a project called Listen Up! that aims to give people a chance to share their stories as part of a community of reporters. Some of them write for this publication. 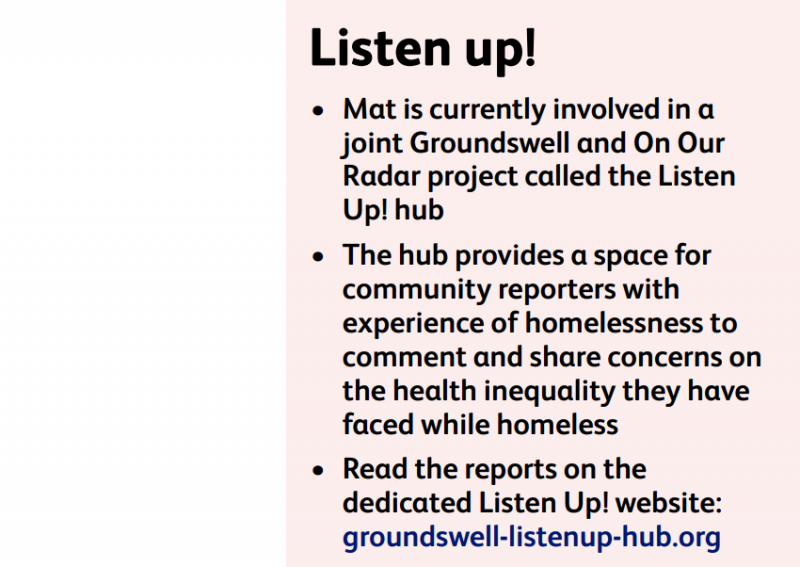 Sharing stories humanises the reporter in both their own eyes and the readers, whilst being part of a community amplifies the impact of those stories.