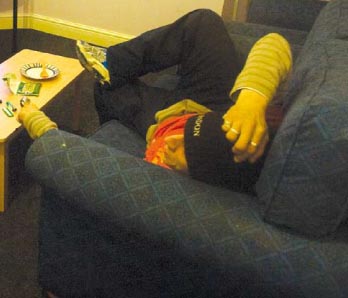 Going cold turkey is not the answer in one hostel Going cold turkey is not the answer in one hostel Hostels are having to reconsider how they work with drug addiction. Last year's Homeless Link report suggested housing and treatment services needed to work more closely together or risk reinforcing rather than treating abuse. So this month, The Pavement has looked at one endeavour which challenges rehabilitation methods by welcoming addicts with open arms. Last November, more than a dozen rough sleepers in London were hospitalised with severe adverse reactions to contaminated heroin, and we asked whether enforcing a zero-tolerance approach towards drug abuse would protect service users. One hostel worker reacted angrily: how would hiding addiction ever see it treated affectively? "If we had not known what they were using, how would we have been able to help them?" asks Stephen Davies, support manager at King George's hostel in London, whose residents used the contaminated heroin. He claims that Because his organisation encourages openness about drugs use, they are in a better position to support residents. "We have heard horror stories about rough sleepers lying to get themselves into hostels, and then hiding their drink and drugs. People will be worried about telling their key workers about bad hits for fear of being punished," he explains. "But if someone knows, they can be open about what they do, and be open with their case workers, then we can build a better relationship with them." New King George's Hostel residents have to undertake a six-week course about the dangers of drug abuse, and have blood tests to ascertain how seriously their usage has affected them. "If they make it through this course, they are welcome to stay as long as they need," says Mr Davies. Using residents, typically crack or heroin addicts, stay with other addicts in self-catered flats, with private bedrooms and shared facilities. On the second floor, relatively new residents who have not yet stopped using drugs live together. As it becomes apparent they want to stop using, or reduce their medication, they move up a floor. On the top (fourth) floor, former addicts stay together while they wait for a place in temporary accommodation or apply for a council flat. Craig is 32 and until he arrived at King George's, had been using crack and heroin for more than a decade. After more than a year at King George's, he feels this is the only system to have helped him - and his relationship with the staff was crucial. "Some hostels have a high staff turnover, so you end up telling your story over and over again to different people. When you are an addict, you need to feel you can approach and trust people," he says. "There is someone there if you need them, but you can only get clean if you want to - it has to be your choice." Craig served time in prison, where he experienced the worst treatment for his dependency. "If you end up in prison for 10 days and then you are out, that is too much pressure on you to stop too quickly," he explains. "You can have your methadone, but it is reduced very quickly. The screws will just ask: 'Do you want it or not?' So a little bit is better than climbing up the walls." Going cold turkey, in his view, did more harm than good. Downstairs, 21-year-old Matt has been clean for just a few weeks and is trying to reduce his methadone dosage by 5ml each week. It is a target he has set himself. He has been in four hostels in four years but this is the first time he has felt compelled to stop. "I have been looked at [in other hostels] with such contempt. Some people think you are just a junkie," he says. "I know they are there to help you, they must have to deal with people like me all the time, but the staff will speak down to you, speak to you like you are dirt. Here, there are not a lot of people who have not experienced drugs." Perhaps it is not dissimilar from telling a contrary person not to do something, thus making them wanting to do it more, but the hostel's hands-off approach to drug addiction appears to be working. Mr Davies says they are now getting inquiries from other hostels about how to work. But perhaps it is simply allowing residents to think for themselves that is really getting through. "When you are addicted, you cannot look at someone and say you have solved it spot on," says another resident, Keffen. "I know we all think in different ways. But it is the same drug, and you are all looking for the same thing."
< Drugs - part 1 Fifteen below >