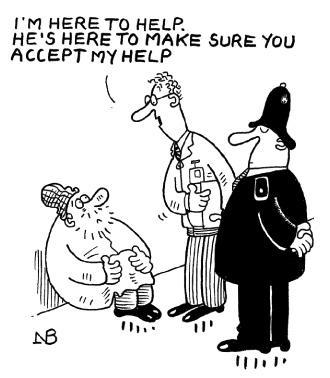 Outreach workers across London are receiving support from local police officers, with the two groups working in tandem across the capital and leading one industry insider to talk of the police being "embedded" with homeless groups.

After discovering that outreach teams in west London's Fulham and Hammersmith area were being assisted by a constable and a community support officer, The Pavement has discovered a wider trend of co-operation that stretches across London. The START outreach team in Southwark, St Mungo's in Westminster and the company Crime Reduction Initiatives (CRI), which operates outreach in several boroughs, all regularly work alongside the police in their outreach work.

Although the level of police involvement varies, they appear, in some cases, to be working with outreach teams in all their dealings with rough sleepers living on the streets. The relationship is not confined to the policy meetings organised by local authorities, where police and outreach organisations have worked together in the past, but has been extended to much of the day-to-day work done at street level.

There are now fears that such a strong level of police involvement with outreach teams could put undue strain on relationships between outreach workers and the homeless. In 2008, Homeless Link published a handbook called Working Constructively with Enforcement, on how the police should work with outreach. It describes enforcement as "a high-risk strategy", and warns against police action leading to "geographical displacement - where rough sleepers are moved on from an area, they have little choice to move to another". Crucially, the extent to which police could use their powers to forcibly extract information or to give ASBOs to uncooperative street sleepers also seems unclear.

The most straightforward reason for outreach workers needing police assistance is protection, says Hai-Anh Hoang of the St Mungo's BBS [Building-Based Service} team. "We work alongside the police most of the time," she explains. "It's necessary for the police to be there if clients are abusive or hard to control." But Ms Hoang concedes that the presence of police officers can make people unwilling to give out personal information. "We try not to let clients know how closely we work with the police," she admits. "[But] if clients aren't cooperative, we need help from the police to get their ID."

A recent letter from Sergeant Dave Wiggins of north London's Islington police to a member of a resident's association website, kingscrossenvironment.com, reveals more about the objectives behind this co-operation. Responding to a resident's complaint about rough sleeping and street drinkers in the King's Cross area, the sergeant writes that the reason for the increase in street drinking in the area is, "because Camden Police's Kings Cross SNT [Safer Neighbourhood Team] have been working intensively on their side of King's Cross, pushing the beggars, street drinkers etc into our part of Kings Cross."

In this scenario, outreach workers, the police and the council all focus their efforts on one place at a time, with the result that rough sleepers are forced into new areas, away from the attentions of the authorities, the public and CCTV. This satisfies demands from residents' associations, who often want to see the visible evidence of homelessness removed from their neighbourhoods, but allows for little of the potentially long-term support that outreach teams could be giving to rough sleepers, aiming to help even the long-term rough sleepers into permanent accommodation.

To get a sense of local council attitudes to rough sleepers, The Pavement called Camden Council, posing as a new resident in the King's Cross area who was concerned about rough sleepers near their home. The council's information service said to ring the police directly, saying: "there's nothing else the Council can do apart from get police to move them on." Even when asked about the possibility of contacting an outreach service or a charity, The Pavement was told contacting the police was "the best and quickest option". Perhaps the most important factor motivating this level of heightened cooperation between outreach services and the police is increased demands made on outreach programmes and local authorities to meet government targets on cutting homelessness.

Continued funding for certain outreach programmes will depend on decreasing numbers of homeless people leading up to the London Olympics in 2012. In this context, it is possible that necessity could force outreach services to be further subsumed into police work, and the aspect of outreach that provides care and support will be lost.
< Skips for soup runs Olympic clean up >