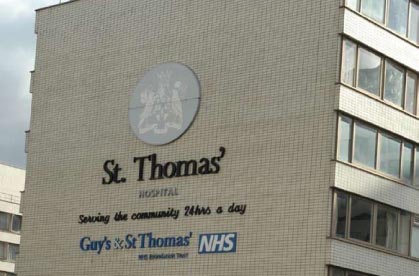 Evans:
One story reminded us of a longstanding problem for readers: hospital discharge protocols

An Emmaus companion was discharged from Guy's and St Thomas's hospital, London, wearing a pair of pyjama bottoms, prompting fresh concern about the aftercare of homeless patients.

Harry Dixon, 48, said he was "really embarrassed" as he waited at Victoria Coach Station for over six hours to catch a coach back to Bolton.

Mr Dixon had come to London to volunteer with Crisis at Christmas, as he has done for the past 15 years. On New Year's Eve, he was out in Leicester Square when someone poured a drink over him.

As he chased the man around the corner, Mr Dixon was attacked with a champagne bottle. "I got whacked in the face and the next thing I know I was on the floor, in a pool of blood," he told The Pavement.

At Guy's and St Thomas's NHS Trust, the police took Mr Dixon's clothes for forensic testing, leaving him with nothing to wear, as his luggage had also been stolen during the attack. When he was discharged on 6 January, hospital staff provided a shirt, jumper, jacket, shoes and pair of underpants. Although he says they tried their best, the staff could only find pyjama bottoms to replace his trousers.

At Mr Dixon's request, the hospital called a taxi to take him to St Martin-in-the-Fields, but by the time the taxi arrived, it was already too late for him to get into The Connection day centre. St Martin's referred him to Charing Cross Police Station, where he secured a travel permit to return to Bolton.

"I was sitting round Victoria from 5pm till 11.30pm in pyjama bottoms," Mr Dixon said. "I tried to keep away from the doors because obviously it was too cold. Everyone kept looking at me... I felt like I was from a mental hospital because all I had was a carrier bag".

What about the guidelines?

Back in December 2006, Homeless Link and the London Network for Nurses and Midwives released a set of guidelines for discharging homeless patients from hospital, as reported in The Pavement (Issue 32, London edition, June 2008).

Issued in partnership with Communities for Local Government (CLG) and the Department of Health (DH), the guidelines stated "safe discharge is the duty of the hospital trust", citing the need for hospitals to work in partnership with local authority housing departments, social services and voluntary groups working with homeless people.

According to Alice Evans, head of policy analysis at Homeless Link, the guidelines were sent out to all their members, and the DH included links to it in their mailings to NHS hospitals and Primary Care Trusts (PCTs). The guidelines have not been redistributed since, though Ms Evans said Homeless Link have continued to promote them.

Although not legally enforceable, the guidelines were intended to educate hospital staff on dealing with homeless patients, covering subjects such as ensuring the patient does not lose their space in a hostel or contacting their key worker. Provision of clothing, however, is not mentioned.

"We haven't been prescriptive in the guidance," explained Ms Evans. "It's saying to each hospital you need to think about what is suitable for you… [Homeless patients] need to have appropriate clothing whether that's the hospital's responsibility or the hospital liaises with the day centre, who may have the clothing that they can provide."

For Guy's and St Thomas's, the issue of lack of clothing is apparent in a public appeal on their website which reads: "Washed clothing is urgently needed for patients admitted who are either homeless, have had their own clothes cut off, or who have been brought to the department in their nightwear. These patients often have no-one to bring in their own clothing from home, so the donated clothing helps make sure that everyone leaves the hospital with dignity."

Despite the guidelines having been available for more than three years, in the interim findings of Homeless Link's Health Audit, published in October last year, only three out of the 17 respondents admitted to hospital were helped with their housing before being discharged.

"There is more work to be done around getting the guidance adopted and implemented by hospitals," Ms Evans conceded. "There is movement across the country, but it's sporadic in terms of what's happening."

Defending Homeless Link, she added: "We have limited resources… it's a long process getting [a hospital protocol] set up because of the number of different partners involved in it." In response to the slow take-up, Ms Evans said Homeless Link was "thinking ourselves what more we can do around promoting the guidance and encouraging uptake". Yet she could not yet provide any specific examples of what this action might be.

"We're just talking, we're starting to think about it," said Ms Evans, instead highlighting the Health Needs Audit and the hospital discharge case studies it was commissioned to conduct by the Housing Learning and Improvement Network.

"We have [also] promoted West Sussex short-term housing provision for people when released from hospital who are waiting for appropriate accommodation and are temporarily housed by an RSL [Registered Social Landlord] in disabled-access flats. We were also involved in evidencing and getting set up an innovative intermediate care provision for homeless people, which has now been set up with a hostel in Lambeth."

Ironically, Guy's and St Thomas's NHS Trust is seen as a beacon of excellence when it comes to homeless hospital discharge. Communications manager Malcolm Bennie told The Pavement the hospital was aware of Homeless Link's guidelines and follows them. It also has its own protocol and, for the past two years, a dedicated homeless patients' discharge coordinator. This role, Mr Bennie said, is "primarily for supporting patients who are in acute hospital beds and to facilitate and support discharge. However, the person is also available if there are problems for patients who attend A&E, but a number of homeless patients do attend A&E out of hours."

Mr Dixon requested to see the homeless coordinator during his time at Guy's and St Thomas's and told The Pavement: "He tried his best... I wanted to go to Winchester [at the time] but that never happened."

As well as a homeless-patient coordinator, the hospital also has use of the Simon Patient Hotel, which offers bed and board and a minimal amount of personal care for patients who are unable to return home when they are well enough to leave the ward. Patients can stay in the NHS-funded facility for between one day and six weeks.

Although Mr Bennie was unable to talk to The Pavement about Mr Dixon's case, he said, "Each patient is assessed on an individual basis for discharge requirements, including pre-paid transport... If required, we will attempt to contact a homeless person's keyworker. This will depend on the time of day and the individual patient's requirements."

While Homeless Link thinks about its next step, other organisations are making homeless discharge a priority issue.

In the summary to its 2008 Health Strategy, St Mungo's has pledged to "press for every resident discharged from hospital to have an appropriate treatment plan with follow up" and to set up a pilot "hospital at home" project. In January 2009, it implemented this through the launch of The Intermediate Care Pilot Project at its Cedars Road hostel, which aims to ease discharges from hospital and provide key health and medical care for its clients. A report on the project is due to be released this April.

In terms of governmental response, the CLG publication No One Left Out: communities ending rough sleeping reported in November last year that "recommendations have been made to NHS London - through the London Delivery Board - for the establishment of Homeless Ward Rounds to prevent people leaving hospital with nowhere to go."

The Pavement contacted Daniel Pople in the NHS London communications team to find out whether these "homeless ward rounds" have been implemented, and to ask how many homeless patient discharge coordinators there are in London, but at the time of printing still had not received a reply.

However, according to Ms Evans, the London Delivery Board is making homeless hospital discharge a priority. "Over the next few months, the Board's Health Subgroup will lead a project working with London hospitals, supporting them to ensure that rough sleepers are discharged in a planned manner that takes them off the streets," she explained.