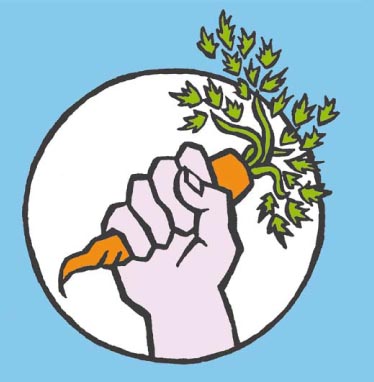 McHenry: There's no reason for people to be homeless except for the need for economic exploitation
We talked to Keith McHenry, co-founder of an innovative organisation When someone mentions free food, most of us think of a soup kitchen - perhaps a church group quietly serving cups of steaming tea. We don't think of one of the top terrorist groups in America, yet this is the title that has been applied to Food Not Bombs, a global movement with two peaceable aims: to give food to the hungry; and to protest against war, poverty and injustice.

The first Food Not Bombs group was formed in 1980 by eight antinuclear activists in Massachusetts. Since then, the concept has spread across the globe, throughout the Americas, Europe, Africa, Asia, Australia and the Middle East. There is no 'top-down' organisation; each group is created autonomously and simply adopts the Food Not Bombs title and consensus-based structure. Their only other unifying characteristic is that they always serve vegetarian or vegan meals, cooked using unwanted food collected from local groceries, markets and health food shops.

In January, one of the founders of the first Food Not Bombs group, Keith McHenry, gave a talk at the London Action Resource Centre as part of a world tour to mark the 30th anniversary of Food Not Bombs. Following a letter about the talk in our last issue, The Pavement went to McHenry's second London appearance at Housing Justice's offices in February, where we caught up with him for a chat.

Other projects
As well as sharing food with homeless people, Food Not Bombs volunteers can often be found feeding protestors at demonstrations against everything from the war in Iraq to globalisation. With their strong organisational skills and ability to respond quickly to unpredictable situations, some groups have even become unofficial emergency food providers. Food Not Bombs groups, for example, were the first to serve hot meals to the rescue workers at the World Trade Center attacks in 2001, and the first to provide food and help to survivors of Hurricane Katrina and the Indian Ocean tsunami.

There are spin-off campaigns, too, such as Bikes Not Bombs; Homes Not Jails; the community gardens project Food Not Lawns; and Really Really Free Markets, where nothing is 'for sale'.

The main function of Homes Not Jails is to house homeless people in unused buildings. The project began in San Francisco in response to a persistent campaign to move on homeless people by the city's police and mayor during which the belongings of some local homeless people were reported to have been destroyed and their pets put down. In protest, the San Francisco 'chapter' of Food Not Bombs provided food to the homeless - for which they were arrested, collectively more than 1,000 times - and began taking over empty properties. In the end, Homes Not Jails had keys to over 400 houses, and housed people in over half of them.

From San Francisco, Homes Not Jails spread, but only as far as Toronto, Boston, Baltimore and Washington DC. Why wasn't it as successful? "I think it's just more complex than cooking," explains McHenry.

"It's kind of harder to get into a building and fix it up, and I think the laws are more severe. In America, you can get [convicted of] trespassing, which could be a year or two of prison, so it's a little more scary. Although, we've had nobody convicted - we've been arrested, but no one's been convicted".

However, despite a slow start, Homes Not Jails is now gaining renewed interest and, according to McHenry, several communist and socialist groups are creating similar projects in an effort to re-house people recently evicted from their homes.

"Sometimes we've done actions where we take over buildings [where] you'll freeze to death if you actually stayed in them, but they're symbolic buildings. Once, we took over these houses on a military base because there was a law that they had to give you the house if you were working for a non-profit group, that kind of thing.

"It's much more powerful to talk about how society should be changed while actually implementing changes through direct action than it is to talk about 'oh, wouldn't it be great if sometime something happened that was better'. I think that makes a big difference."

Food and politics
Food Not Bombs calls itself a movement, not a charity, a distinction that separates it from soup kitchens with no agenda other than to serve food. "We're trying to make a point that we think the way society's organised is just not right," says McHenry. "That no one should really be homeless and there's no reason for people to be homeless except for the need for economic exploitation."

This political, grassroots philosophy often ruffles feathers - and not just those of the police: "Sometimes the government tries to get Food Not Bombs groups to become charities and says 'oh, just don't have the literature and banner, and then you can serve the food'".

Occasionally the authorities go even further. McHenry describes a US policy called Weed and Seed in which food donations will be withheld if a population is not "cooperating". This could include getting people to move out of an area so it can be gentrified. "They will say 'we'll give you food if you do what we say and we will not give you any food if you don't do what we say'", McHenry explains.

Food for thought
During the Q&A session after the Housing Justice talk, McHenry defended soup kitchens, which have been criticised by some UK individuals and organisations in recent years: "if people are not spending their energy trying to find food, and struggling and starving, they have more freedom to come up with other ideas of things to do.

"And the message of just giving out free stuff is pretty dramatic, which is one of the reasons why we have a policy of giving it to anybody - whether they're rich or poor, drunk or sober. Because in a capitalist system, free stuff kind of destabilises people's image of what's happening."

However, for McHenry, giving free food is not enough - there also has to be a political message, most importantly to drive social change, but also to balance the often unequal relationship between giver and receiver. Having been homeless five times himself (and still struggling with housing troubles now), McHenry is well aware of this divide: "In America, I always felt the way that most charities treat homeless people is like they're above the homeless… they try to make you feel like you should be really appreciative of it and that you're kind of maybe retarded or stupid or something and that's why you're homeless."

In fact, sleeping rough has made McHenry more determined and given him "a good impression of how painful it is to be homeless". It's also, he says, why he's so dedicated to Food Not Bombs being a force for social change: "I don't want to spend my days working so that everybody gets to be in a soup line - I want to spend my days working so that no one has to go to a soup line and everyone has a warm place to go to sleep."

Could this happen by 2012, as so many are promising?

"I think we could end homelessness by 2012," says McHenry, "but it's going to take total undying dedication to ending capitalism, and it seems to be going to opposite direction currently. "We have to get to a point where either we have made it so uncomfortable for the owners of property that they decide 'OK, surplus property is illegal and we're going to just let people live in it' or some major shifts of consciousness happen. And in America, actually that is happening… People who were diehard capitalist Republicans have lost their homes and are now seeing that maybe this political and economic system is not realistic."

This economic system, in which a huge proportion of the budget is spent on defence, is a key bone of contention for McHenry and, as its name suggests, for Food Not Bombs as a whole - particularly in the US, and here in the UK where the defence budget is set to increase from £32.6 billion in 2007/08 to £36.9 billion in 2010/11.

The role of Food Not Bombs, therefore, is to provide "a foundation of how to work together, how to make decisions together by consensus and how to work cooperatively to directly solve problems like hunger, homelessness, transportation, energy, healthcare - things like that".

Getting involved
Food Not Bombs is growing all the time and the creation of new groups is always encouraged. For a guide to setting up a chapter in your area, visit www.foodnotbombs.net and read the 'Seven Steps to Organising a Local Food Not Bombs'.

There are groups across England, in Birmingham, Bristol, Cambridge, Exeter, Leicester, Lancaster, Liverpool, Manchester, Nottingham, Sheffield and York. In London, the Brixton and Whitechapel Food Not Bombs groups have now combined under one Hackney chapter and can be contacted at londonfnb@lists.riseup.net.