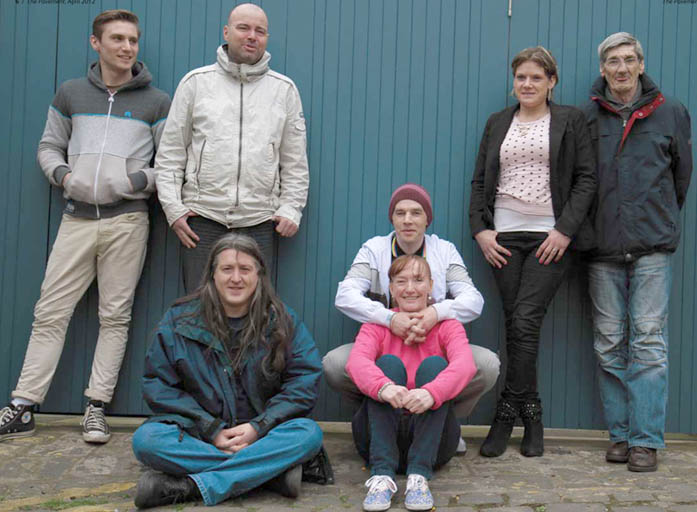 “There is such a stigma attached to homelessness that needs to be addressed. And if you can get the public thinking of people as people and not just as the homeless, that’s a big step.”

So says, John, one of those behind a new film made with the Scottish Homelessness and Employability Network (Shen), aiming to counter the stereotypes surrounding homelessness.

A group of seven men and women (pictured), all of whom had experienced homelessness took part in the film-making project, the result of which - Space is the Place - was launched at Shen’s Annual Forum late last month.

The filmmaking team who took part in the Edinburgh-based two-month project, were tasked with making a short and engaging film which looked at the person behind the ‘homeless’ label.

The project is part of Open Cinema, which as well as programming films for a homeless audience, provides opportunities for those who have experienced homelessness to work with professional directors. The group came up with the concept of filming each other in the places that allowed them the headspace to stop and reflect. This ultimately helped them to move on and find more stability.

Locations included Carlton Hill in Edinburgh, and parts of the south Ayrshire coastline, where some of the group had strong emotional connections and happy memories.

The group were also filmed talking about what had helped to turn their lives around including support workers, hostel staff, college and even the filmmaking project itself. The aim was to present portraits of well-rounded people with rich histories and aspirations that challenge the usual stereotypes.

William, 68, one of the participants and a former stand-up comedian, became homeless recently after leaving his home in Edinburgh for extended period in an attempt to kick his drug habit. “I ended up getting away to Skye to get myself clean,” he told The Pavement Scotland. “I was away for seven weeks and when I got back they said my house had been abandoned and had been cleared, so I was homeless.

“I had no idea what to do. I went to Access Point on Leith Walk and they got me into a hostel and from there, my support worker got me into sheltered housing. It’s great. Now I’ve got a much more positive mental attitude. I can see a future for myself.”

William says working on the film also helped to boast his confidence. “It was a brilliant experience. I hope that the film shows people who have been homeless that there is hope.

“I also hope that it shows we’re not just alcoholics and junkies - people often end up homeless through no fault of their own due to the circumstances that they face. There’s so much stigma attached to being homeless and we are hoping to open people’s minds a bit.”

Clare Archibald, Shen’s National Co-ordinator, is now planning to use the film when training frontline homeless staff as well as those from Jobcentre Plus and employment networks. S he is also hoping it will have more public screenings, and is currently in talks with Edinburgh Film Festival who may show it in June. “I think some people forget the impact that homelessness has on everything, even confidence and self-esteem,” she says.

For Archibald, the positive experience of the project was also a measure of success, and she is delighted by reports from the participants of increased self-confidence. “That in itself is a step towards employability,” she adds.

“This film reinforces what it takes to overcome some of the challenges that have come their way. Homelessness can be deeply destructive but surviving it, and moving on, is no mean feat. “