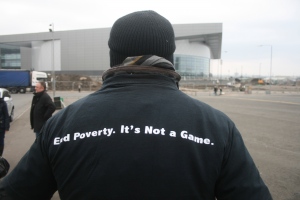 An initiative designed to draw attention to negative social consequences of major sports events has visited the site of Glasgow’s forthcoming Commonwealth Games.

The Poverty Olympics was started in Vancouver in 2008 to draw attention to the devastating impact of preparations for the 2010 Winter Olympics on some of the city’s poorer residents.

The event, featuring events such as the Welfare Hurdles and Poverty Line High Jump, have taken place annually since.

On Thursday 15 March delegates from Vancouver, led by campaigner Elizabeth Hogg, handed the ‘Poverty Torch’ over to local residents of Dalmarnock, where the majority of the development is taking place.

A torch relay took place, stopping at a number of sites of significant disruption to the social fabric of the area. Around 30 local residents took part in the relay, which was not covered by the mainstream media.

Amongst the sites on the route was the Accord Centre, a day centre for individuals with learning difficulties and their carers, which is due to be demolished to create room for a car park. It also went past the former site of Margaret Jaconelli’s home on Ardenlea Street, which was demolished to make way for the Athlete’s Village. In February, The Pavement reported that Jaconelli is still homeless a year after her eviction.

The Canadians were welcomed to Scotland by Glasgow Games Monitor 2014, a campaign group formed to raise awareness of the impact of regeneration programs on the people of Dalmarnock, particularly with regard to housing and homelessness.

Campaigner Dr Libby Porter said that the negative consequences of the development on housing were twofold. “The first impact [in Dalmarnock] is the demolition of existing housing, which is mainly public, and the displacement this is causing,” she said. “A whole community has been moved on - Margaret Jaconelli’s experience is only the most striking example of this.

“Secondly, the development of the Athlete’s Village will lead to a restructuring of the housing market in Dalmarnock. There is no guarantee that enough affordable housing will be available. ‘“Regeneration” projects [such as the development in Dalmarnock] are often exercises in state-led gentrification, and can actually lead to higher rates of homelessness.”

A spokesperson from Glasgow City Council denied these suggestions. He said: “Right now, City Legacy is building hundreds of good quality homes in Dalmarnock, the majority of which will be for rent after the Games. “Homes temporarily used for athletes in 2014 will become available after the Games. 304 will be for sale, 300 for social rent and 100 for mid-market rent.

“A 120-bed care home is also being developed and these homes will have access to improved community facilities and transport links - creating better opportunities for employment.”