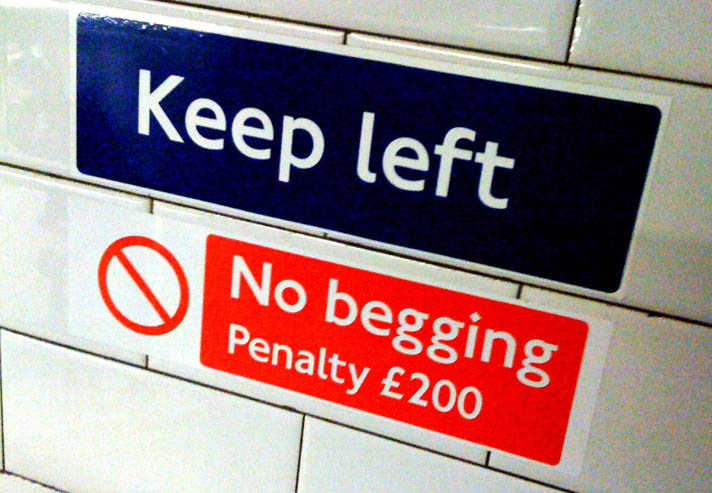 Figures obtained by the Pavement under a Freedom of Information request show the number of people arrested for begging in London has almost doubled in the last three years.

Figures obtained by the Pavement under a Freedom of Information request show the number of people arrested for begging in London has almost doubled in the last three years.

The “shocking” findings have been condemned by some who worry that homeless people are being unnecessarily criminalised.

The statistics from the Metropolitan Police show that 375 people were arrested and held in custody for begging in London in 2011. The following year, the number rose to 514, with a total of 700 people arrested for begging from January to December 2013.

In England and Wales, it is an offence under Section 3 of the Vagrancy Act 1824 and Section 70 of the Criminal Justice Act 1982 to beg in a public place. Many have campaigned against the Vagrancy Act, arguing that the Victorian law is irrelevant to modern life.

In Scotland it is not against the law to beg. However, several local authorities, including Aberdeen and Glasgow city councils, are considering bylaws which would make it illegal to ask for money on the street.

Some homeless charities condemned the findings, which they said showed an increase in the number of society’s most vulnerable being criminalised.

Alison Gelder, chief executive of Housing Justice, said: “I’m shocked that it’s gone up so much. Antisocial behaviour is one thing, but the criminalisation of poverty is something else entirely.

“If the number of people begging has increased, I would have a strong suspicion that this is linked to the rise in benefit cuts and sanctions, and that people are being driven to beg from desperation. This is a very vulnerable group and I’d like to see police offering support wherever possible rather than criminalising people they find begging."

Jamie Nalton, the Simon Community in London’s manager, added: “There is a lot of misunderstanding around welfare reform, and people are being sanctioned and ending up with no money whatsoever.

“Not everyone is aware of services, and there may be reasons they feel unable to engage with them.

"Some services in Westminster, for example, are only available to people with a local connection. I think we really need to try to understand more about why people are begging.

“Arresting people and giving them a criminal record is absolutely not helpful. The police need a better understanding of the issues that they are dealing with here."

However, some homeless charities believe begging is a lifestyle choice. Several, including the Connection at St Martin’s, which supports “police enforcement” of the law on begging, have run campaigns asking the public not to give money to beggars.

Beki Winter, CSTM’s outreach manager in Westminster, said: “Most people we see who beg are accommodated either in hostels within Westminster or in places outside Westminster; many are known to us.

“Our outreach teams focus on making contact with people begging if we don’t know them and we see particular cause for concern e.g. they are unwell, very young or female.

“These interactions rarely, if ever, prove useful, as we are generally considered to be a disruption to their income stream and they advise us that they are well aware of services and support should they require it.

“We have supported enforcement action (and will continue to) against individuals if their begging and other street-based antisocial behaviour causes significant alarm and distress to others, as well being the cause of their own decline in emotional and physical health. We believe that a coordinated response between homeless services, drug and alcohol services and the police is the best way to ensure someone gets the help they need to avoid premature death.”

A spokesman for the Metropolitan Police said that officers who saw someone begging, or were told about someone doing so, had choices about how to respond. However, the police also claim that they are duty-bound to investigate if an officer sees someone breaking the law by begging, or if they receive a complaint from the public.

“An officer has discretion about the action they can take and their response may range from arrest to a warning to desist,” he added.

“Partner agencies are available to those who find themselves in crisis and should the officer discover a person begging, who needs help, he may refer that person for help and support.

“However, some begging can be intrusive and intimidating and an officer has to ensure their action is balanced, justifiable and fair to all those who use our streets."

Many say people are begging to fund drink and drug addictions. The Pavement asked a man who used to beg for his story:

"I begged because I couldn't claim benefits – I was too young. Since I couldn't get a regular income from the government or a job, I had no choice but to beg. I spent the money on food, extra clothes and toiletries. I did drink at the time, but that came from a different source. I have never used drugs on a regular basis.

When people stopped, it made me feel ashamed. This was mainly because I hated having to rely on others. When they walked past, I felt frustrated, as this was a primary means of income that relied on the not-so-frequent charity of others.

I wasn't allowed into the day centre at the time because of rules like age and nationality status that were in place.

I was arrested by the police as it is easy to unwittingly ask an undercover officer for money.

Also, to beg you need to stay in one place or area, which eliminates the possibility of anonymity. I was afraid to beg after this and never did it again."

B&B should be banned >