What Cathy came home to 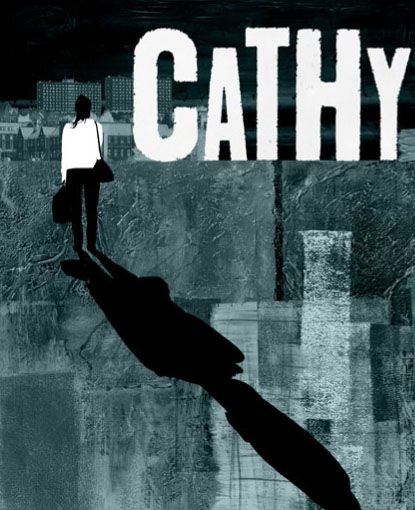 If you’re homeless in London, you are likely to be relocated out with your community, an issue being taken on by a new play, finds Karin Goodwin.

What do you do when you’re a single mum and you’re homeless? Contact your local authority, of course. But what happens when it says it has no housing to offer, and instead sends you miles from your community, children’s schools and support networks? What happens then?

It’s a question that’s raised by Ken Loach’s latest film I, Daniel Blake, released in October, in which a young homeless London mother is rehoused in Newcastle. And it’s also central issue of theatre company Cardboard Citizen’s take on Cathy Come Home, this time titled Cathy and focusing on the plight of a mother and her teenage daughter forced into taking an “out of area placement”.

Both these dramas aim to show that this policy is leaving people feeling trapped, isolated and depressed.

But for Elina Garrick, a mother of three from Newham who was moved Welwyn Garden City, the answer is it’s time to fight. Elina, originally from Bratislava, moved to London in 2005, where all three of her children – now three, five and eight were born. Juggling numerous badly-paid jobs, she lived in a series of private lets where conditions were bad despite the high rents. But when her relationship with her partner broke down, she found herself unable to afford to pay even for the dilapidated flat she was living in and presented as homeless.

Newham Council claims its hands were tied. What, say officials, can be done when there are no homes and no money to build new ones? They offered her a bedsit in Welwyn Garden City instead; it was what they called an “out of area placement”.

Elina Garrick said: “We didn’t have any choice. If we hadn’t taken this place, we could have ended up on the street. I didn’t pack any bedding, and that night me and my daughter slept on our coats. We didn’t have any pots, so I couldn’t cook anything for us to eat. I was so scared and depressed.”

And though she soon met a friendly neighbour who helped her find the shops (and her feet), it took months to get her daughter into school and there was no one to pick up the slack.

A Newham Council spokesperson said it was experiencing “a housing crisis”. “The Government’s welfare reforms mean increasing numbers of properties are unaffordable to those on Housing Benefit. Due to these changes, we have seen an increase in people moving to Newham from other parts of London,” a council spokeswoman explained, admitting the situation was likely to get worse due to further benefit cuts due to come in.

Latest official figures show that 17,150 households were temporarily housed out of area in 2015, up from 5,330 in 2010. Over 90 per cent of placements were made by London authorities, who claim that high rents, housing benefit caps and affordable housing shortages mean they can do nothing else.

According to a report published by Shelter earlier this year, only one in 10 out of area placements are made out of London. But over a quarter (26 per cent) are moved further than the neighbouring borough, and there have been cases of people offered accommodation as far away as Birmingham.

The charity claims people were often forced to make on the spot decisions about moving. One Shelter solicitor observed a housing officer walking into the middle of a packed waiting room to announce that if people weren’t prepared to move to the West Midlands, they should leave. Others were threatened with having their children taken into care, though this is not legal.

Kate Webb, the charity’s head of policy at explains it can have a “devastating” effect on people’s lives. “But it doesn’t have to be this way,” she adds. “The government has an opportunity to do things differently – starting with making sure councils receive proper funding, and building homes that people on lower incomes can actually afford.”

According to Ali Taylor, the writer of Cathy (which Cardboard Citizens produced to celebrate 25 years of making work for and by homeless people), this is one of today’s key issues. His story is based on interviews with 12 women offered places outside London, far from family and friends. It offers a modern take on the story of the original Cathy battling to keep a roof over her family’s head.

“The original was about a woman coming to London and being buffeted by the system; this seemed like the opposite – the story of a woman who was ejected from the city. It was like a mirror image."

The women he interviewed felt isolated, lonely and disempowered. But he also met brave women like Elina, who fought moves to subsequently rehouse her in Birmingham. And though she ended up accepting a house in Basildon, she is now helping other young mothers take on the system.

And he hopes those positive stories will inspire. Like Cardboard Citizen’s other performances, the format will be forum theatre; during the second run-through, the audience can stop the action and offer an alternative. “That’s the thing about it being forum theatre; people affected by these issues will get to have their say,” says Ali. In his experience that’s what they’ve not had until now.

What you can do: insist on a suitability assessment, which is a legal requirement. Contact Shelter or (volunteer group) Focus E15.

“We thought homelessness was only going to be a passing post-war phase.” That’s a quote from a film called Cathy Comes Home, which was aired on the BBC in 1966. Directed by Ken Loach, it concentrated on the experience of one young family and how they were affected by homelessness, ending in Cathy being left destitute with her kids taken into care. The film, written by Jeremy Standford, shocked the nation and was one of the reasons Shelter was founded in that same year.

The film is now marking its 50th anniversary. And to mark its own 25th birthday, Cardboard Citizens – a theatre company making work for and with homeless people – presented a retelling of the story adapted and directed by Tony McBride in July.

I asked Tony why is the play so relevant to today? “Homelessness still exists and there are many more Cathy stories to be told,” he explained. “Retelling the story from 50 years ago reminds us that, although we've see some progress in certain areas, , we've still got a lot of work to do in others.”

When the Cardboard Citizens members watched the film together, he told me, their response was emotional. Everyone had stories to tell of their own homelessness and all related to Cathy’s in some way.

“I was particularly struck by how many issues being talked about and lived through in 1966 are still current,” he said. “Buy-to-let mortgages; dodgy landlords; inadequate and insufficient housing stock; blaming of immigrants and lack of political vision and leadership – to name a few – are issues I hear being almost daily at Cardboard Citizens and in wider society.”

And it had a big effect on the cast too. Actor Richard Honeyghan said it made him more aware of his own situation. Another cast member said it made him reflect on his journey into homelessness.

I spoke to many members of the audience and they all said they had gone through an emotional rollercoaster as they followed the story. Catherine Puller, watching, spoke of how it highlighted the lack of progress since the original film was shown.

And Jonny Wilkes, who works for homeless support organisation LookAhead, said it reminded him of how the system lets people down. It made him feel more committed to help people, he claimed. And that’s the power of theatre sometimes. It can make people think differently, dig a bit deeper, even 50 years on.

< Opinion: why art matters Art in a time of crisis >