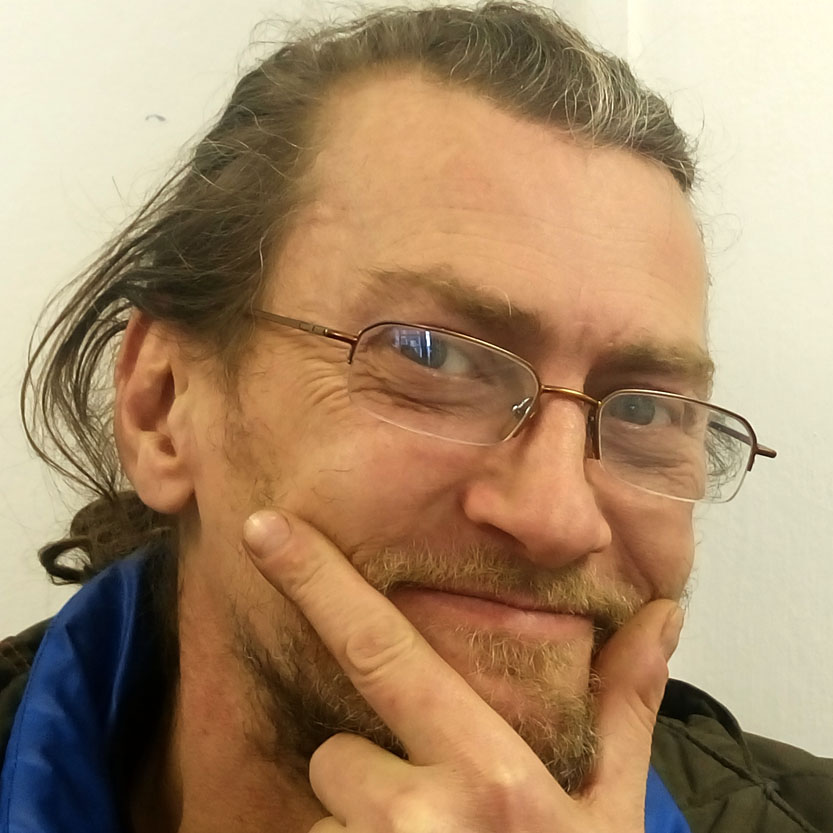 Julz: the number of people sleeping rough has increased, even though there are over 610,000 empty residential properties across the country
Julz Watt hears from people who say it’s essential to find creative solutions to homelessness.

Julz Watt has over 25 years’ experience of squatting. But now, with residential squatting illegal and fewer housing options than ever, he hears from those who say it’s essential to find creative solutions.

The atmosphere in this large warehouse studio space in North London is lively as people of all ages mingle with curious faces around a variety of art installations and sculptures. Meanwhile, music blasts from the bands and musicians entertaining us on a stage at the back of the space.

These “Temporary Autonomous Art” (TAA) events are one way some squatters have been collectively staying active since the change in the law which made residential squatting a criminal offence in September 2012.

I speak to Jess, originally from Random Artists, who have been creating TAA spaces in large communal squats and warehouses for over 15 years. According to her, these events are about celebrating the good things that come from squatting; the ways that people transform derelict spaces into somewhere beautiful. “I think squatting’s taught me [about] that DIY nature of the community and creating a space,” she says. “When you give people that kind of autonomy and that power over their living environment, they actually give a shit.”

At times, it can be hard to see the positives in this change in the law, which has been a blow to squatters’ rights. Since it was introduced in 2012, over 736 people have been arrested (148 in 2015 alone), 64 per cent of them being young men.

Meanwhile, the number of homeless people sleeping rough on the streets has increased, even though there are over 610,000 empty residential properties across the country. There are over 22,000 in London alone, 7,500 of them council houses, according to an Freedom of Information Act request submitted by the Guardian last year.

It’s a situation many in the squatting world can’t understand. “There are so many empty houses that people should be living in,” Jess explains. “We hear all the time this government’s going to spend this or that much on new houses. Actually, what we need to do is take into public ownership the huge amount of empty houses that are already there.”

Anthony, who works at Spectrum in Camden, one of the frontline services provided by ThamesReach, explains how the law change has affected the people he works with. “It’s affecting people right across the board – male, female, indigenous people and Europeans,” he says. “It has put more pressure on the resources that are available out there. It’s forced people to look elsewhere, and the elsewhere is commercial properties. It takes a group of people with the necessary vibes to share and be one within that space to make it work. Because a lot of homeless people become entrenched in what they are doing, they want their own space, so joining up with a group to take over a commercial space isn’t for everybody.”

‘River’, who has been squatting for around six years, tells me about an eviction she witnessed of a commercial property where the bailiffs broke down the door at 6am while the occupants were sleeping. Over 60 people were instantly evicted, two of them pregnant women. “The police attitude has got worse since the law change. They feel justified in treating people worse and use LASPOA Sec 144 [the section of the law which makes squatting illegal] to evict whole buildings where only a part is actually residential.”

Since 2012, dozens of companies have sprung up acting as “landlords” on behalf of owners enabling, “property guardians” to rent rooms at reduced rental rate. One of their main goals is to prevent squatters from moving into properties. Yet many feel the schemes are problematic. The people acting as guardians don’t have full tenancy rights and many of these buildings in a bad state of repair.

Camelot – one of the new breed of vacant property services whose policy means it can’t guarantee new premises to those occupiers at the point of moving out – had their former European HQ in Shoreditch squatted by activists. Protestors aimed to highlight the lack of homes for the most needy in society. This was an embarrassment for Camelot, which aims to deter buildings from being squatted.

“We are doing this on behalf of dispossessed, homeless people and guardians who are being exploited,” said one of the squatters in a news report last year.

Camelot, of course, see it differently, claiming that the property guardian system actually helps provide low-cost accommodation for people who would otherwise be homeless.

Paul Lloyd, Camelot Europe, told the Pavement: “Without guardians, most of these properties would be boarded up, secured and have security guards on them.

“Guardians get the chance to live in properties under licence with communal areas and their own bedrooms for a fraction of the usual rents in any area.

“When it works well, it is a win-win situation for the property owners and previously homeless and low-income people. We have thousands of happy property guardians across Europe who fear that if current campaigns against the system are successful, they will not have a roof over their heads.”

He admits the downside is the short notice to move on and insists they always try to find alternative accommodation for the guardians.

Personally, I have squatted till recently for over 25 years, mainly in London. A group of us in Balham occupied a large property with consent and agreed with the new owners a peppercorn rent, a nine-month notice to leave, and a one-month rolling tenancy, with each resident paying £1 per person.

With no more “affordable housing” available and evictions already on the rise, tightening the laws on squatting and evicting those who have found somewhere to stay seems perverse.

But there is hope, whether its ‘River’ persisting in the face of police harassment, Jess and the TAA organising creative events, or the squatters occupying the Camelot offices. Increasingly, people coming together and resisting a law they know doesn’t help solve our homeless crisis.

As the calls for it to be repealed grow louder, the DIY spirit embraced by squatters mean new solutions must be found.

Squatting and the law

In September 2012, it became a criminal offence to trespass in residential properties with the intention of living there. The law applies to England and Wales. In Scotland, squatting was already – and remains – illegal. If people are squatting in a clearly residential property, they risk arrest and losing their home.

This law does NOT apply if:
•  the property is not residential (commercial/office space/warehouse etc)
•  you are or were previously tenants (including sub-tenants) of the property
•  you have (or had) an agreement with someone with a right to the property.

The property may be reclaimed if it is unoccupied at any time. Criminal damage is a charge that may apply. Take steps to avoid this.

Where to get advice

The Advisory Service for Squatters: 020 3216 0099 or www.squatter.org.uk/about-ass/
Squatters Action for Secure Housing: go to www.squashcampaign.org/

< Focus: round in circles Veteran issue >