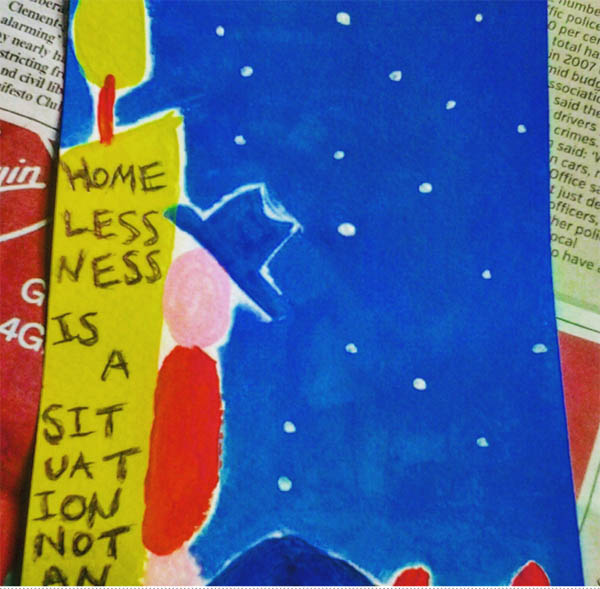 Lived with it all © McGinlay
She had a job, but not enough money to pay for life’s basics – food, rent and utilities

She had a job, but not enough money to pay for life’s basics – food, rent and utilities – so why did McGinlay feel that she couldn’t tell her friends that home was now a squat?


Oh my. I remember it like it was yesterday. I was in my early 20s when I first squatted. And man, was I in for the shock(s) of my young life. Up until then, I had no experience of squatting, squats or squat. I guess my image of squatters was a little romantically naive, after seeing old black and white photos from the 1960s and 1970s, of hippies and Rastas all living happily under one free roof, with daisies in their hair, all Bohemian love and revolutionary peace.

Well, my experience of squatting was far from romantic, quite the opposite. The most surprising thing about it was that my so-called closest friends had no idea about my situation. After all, I was still working, I dressed well, I was living with “flat mates”, living my life and having fun, according to them.

So how did my young 20-something self end up squatting? And how did my friends not notice?

A small fire at my workplace had broken out one day. Luckily, no one was harmed. However, the fire had caused serious damage to one side of the building, meaning that it was no longer safe for a working environment. All full-time staff members’ working hours had to be cut by half and some lost their jobs altogether. I was very fortunate to still have mine, but my reduced hours meant that I was now unable to afford my rent.

One of my work colleagues was already squatting and suggested I stay with them. So, I did, for a year.

As for my closest friends not having a clue about me being a squatter... I knew all along what their views on squatters were. They’d say things like “Squatters, what are they doing? They're taking the sh*t, that’s what they should be called... Sh*tters!” I had enough to cope with as it was, including having the daily experience of feeling like sh*t, so do you seriously think I wanted my friends to see me as a piece of sh*t?

Well they didn’t because they never knew.

• In the 1970s more than 50,000 people were squatting in England. Everyone did it.
• Nowadays Google offers 119 million ways to squat. Problem is, it’s for gym bunnies.
• A search for squatting and the law takes you directly to www.gov.uk on ways to REMOVE squatters.
• There is an Advisory Service for Squatters (ASS), see www.squatter.org.uk and @ASSquattheworld. Best ASS tip: “be prepared to explain why you are not breaking the law”, though this only works if you are squatting a non-residential building.
• Join ASS info sessions to find buildings and people to squat with on 2nd and 4th Tuesday of the month at 56a InfoShop, 56 Crampton Street, SE17 3AE and 1st and 3rd Tuesday of the month at DeCentre, Freedom Bookshop, Angel Alley, Whitechapel High Street, E1 7QX.
• Although squatting is illegal in Scotland, for which we can blame the Highland Clearances and the Trespass (Scotland) Act 1865, the Law Society of Scotland calls it “a potential legal minefield for landowners and police.” (19 Sep 2016, The Journal).

< Let's go outside Un-homeless at last >