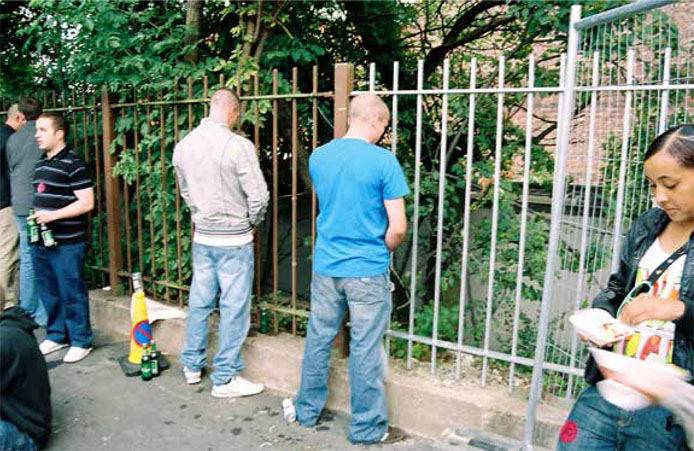 Caught short: taken at the last DPercussion, the UK’s third largest free festival set up as a non-political response by Manchester’s music and art scenes to the decimation of the city’s centre by an IRA bomb in 1996. © Lewis, photographybylewis.co.uk
What to do when you're living on the street and you need to go?

What to do when you’re living on the street and you need to go?

The titles make a trip to the toilet sound fun – there’s the Bog Blog, the Good Loo Guide and even the Loo of the Year awards ceremony, held every December. But when you’re homeless, access to a clean toilet is tricky.

Ask Google “Is my pee normal?” and you’ll find that most people drinking plenty of water will urinate between six and eight times (or more) over 24 hours. That makes normal urination a huge challenge for homeless people. You’ll soon be recognised at local cafes, and may even be barred from using a McDonald’s, Starbucks or pub’s toilets.

If piss is hard, then what’s it like to poo? Or have a period?

“I wish there was more awareness about being homeless,” said Tom (name changed), collecting change from evening commuters outside a Tesco near Goodge Street, WC1. “People say ‘why don’t you pay for a place?’ I can stay in a hostel, but I’d like enough money for a cheap B&B, just to have a wash and a couple of nights' break from the street. Having a break makes such a difference. And then there’s the toilet. Pubs don’t like you going in, so you’re forced to use the street and that’s bad, and people moan about it too.”

Trying to act with decorum, and find a place that lets you take a wee, means that bladder infections and cystitis are two painful side-effects of street life for rough sleepers.

Human poo is an even bigger deal. Come Christmas there’ll be offers of socks, hot meals, overnight stays and dry sleeping bags but it’s a rare person/office who lets anyone bedding down on the street use their toilet. If more public toilets could be open 24 hours, countless people – homeless or not – would be feeling much more comfortable.

If you know your postcode (or have location on your phone) you can find the five nearest toilets to you right now on this fab map from the RCA: https://greatbritishpublictoiletmap.rca.ac.uk
IT’S PANTS: The map doesn’t make clear if the toilet is free or not.

Wetherspoons and Asda have a reputation for having good public toilets. And some organisations are super-friendly about anyone using their public toilets, such as libraries and the Wellcome Collection close to Euston station (which opens at 10am except on Sunday when it’s 11am).
IT’S PANTS: There are still towns which don’t have public toilets.

Sanitary protection is free from some libraries and food banks. More info from the Tricky Period www.cilip.org.uk/page/TrickyPeriod
IT’S PANTS: Tricky Period is only in north London and Norwich.

Transport for London has toilets at some tube stations, which anyone can use “responsibly”, see http://content.tfl.gov.uk/toilets-map.pdf and makes clear if they are behind the ticket barriers, free or if you will be charged 10-50p.
IT’S PANTS: The map is only available online and some of those toilets can only be used if you have a valid ticket. The Pavement asked if we could print the map for our readers, but the charity rate is £350 so we said no, politely.

< Bad case of the booze Shit and anger >