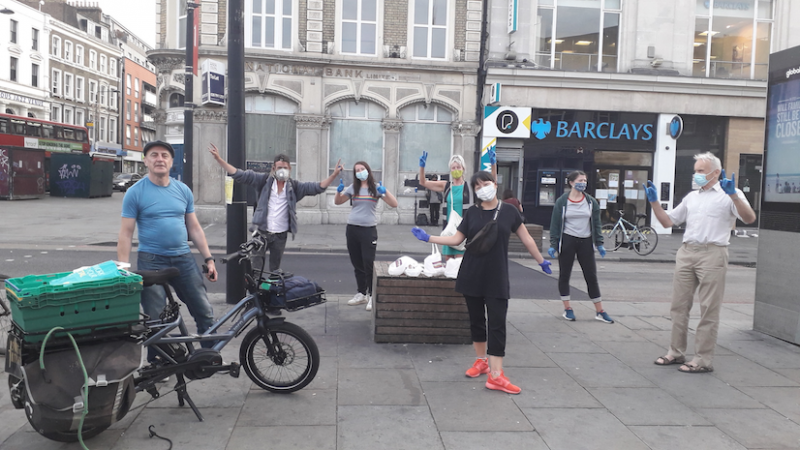 Solidarity not charity: Streets Kitchen were serving 5,000 meals a week by the end of July. © Pavement

Our readers will know what difficulties they’ve faced during the Covid-19 lockdown. Here’s a shout out to some of the people and places who’ve offered help

We know many councils have done good work supporting and rehoming people – here’s a shout out to Lambeth and Islington. But an ever-growing number of people have become homeless, many with no recourse to public funds (NRPF).

The Whitechapel Mission in east London stayed open because so many other centres shut and says – worryingly – that its user numbers, “Doubled. Normally we serve breakfast at 8am but we had to change that to 7am so that everyone had time to get fed,” said a spokesperson.

In Islington the food bank run by the Trussell Trust shut just as lockdown began and still isn’t open (Aug). Hungry people were fed by churches and mutual aid groups. Vicar Alice Whalley from St John the Evangelist, Queen’s Drive, N4 said: “We went from serving 12-30 meals once a week to serving many more. Between 5 April and end of July we served nearly 1,400 meals and the trend is going up and up: last Sunday 70 meals were served.”

Streets Kitchen increased the numbers of locations they offered food. They also began offering breakfast on the streets between Camden and King’s Cross and by July saw a big take-up for the 7am serving, a sure sign says Street Kitchen’s Jon Glackin that rough sleeping numbers are going up.

While the rest of the UK were practicing super-hygiene to keep Covid-19 at bay, rough sleepers not part of Everyone In were struggling to keep clean. “Risk adverse day centres – with all the kit – have retreated from their most vulnerable clients. It’s ridiculous how everyone has been abandoned. We’ve just got one shower and it was being used 20 times a day. We can’t keep that up, it’s exhausting,” said one volunteer who didn’t want to be named.

In Westminster special mention should go to St Patrick’s church in Soho Square which was serving up to 300 people a day lunch and breakfast, as well as the American Church and Under One Sky.

“There were a lot of rumours. We’d pass each other on the way to use the toilet at Euston (the only one open) and were worried that everyone was going to be arrested by the police. After 7pm London was deserted. The sound of Leicester Square fountains was deafening. There was no one. No police. No outreach workers. I wondered where everybody was.

“From the beginning Father Alexander from St Patrick’s church did breakfast in Soho Square. People could space out on benches round the park – sometimes there were 200 people and Michael remembered everyone’s name! I heard that the police said, ‘We like what you are doing so can we direct people here?’ Green Light was giving food and water and Under One Sky supplied wraps, and in the evening a hot drink. I’d get black tea from Marcella. The American Church saved us with their lunch. Lauren the cook presented a restaurant quality meal every day – it was a proper balanced meal. We could see the love!” 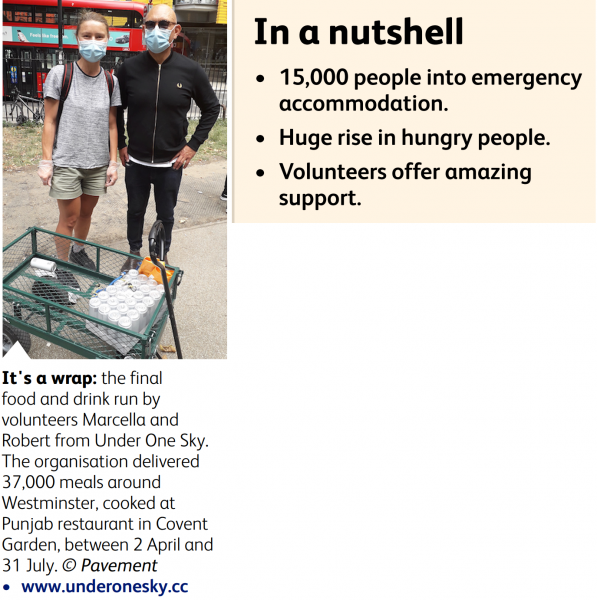