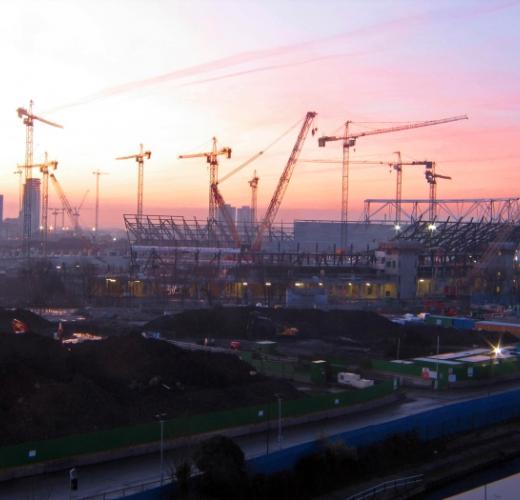 ¬¨¬© London2012.com
What will the London Olympics leave in its wake? At the beginning of 2009, London mayor Boris Johnson, Olympics minister Tessa Jowell and Communities secretary Hazel Blears battled against rumours of overspending and deadline-missing by forming the 2012 Legacy Company, a body meant to ensure that the Olympic Park and the surrounding regenerated area of London has a long-lasting positive effect on communities. It is claimed that after the athletes have gone home, there will still be thousands of new homes and jobs, world-class sports, education and cultural facilities as well as the largest urban park created in Europe for more than 150 years. The woman responsible for ensuring all this happens is Baroness Margaret Ford, who was appointed to chair to Legacy Company last month. A specialist in infrastructure and housing, Baroness Ford advises the Royal Bank of Canada and the UK's largest landlord, Grainger plc, as well as being involved in the redevelopment of that other controversially expensive British showpiece, the Millennium Dome. But is she up to the job in the East End of the capital? The Pavement has spoken to a handful of organisations working in the region about their wishlists for post-Olympic glory... One of the organisations that will no doubt be working closely with the Legacy Company is Homeless Link, the umbrella organisation for the UK's homeless charities. Chief executive officer Jenny Edwards believes the Olympics are a great opportunity to make positive investments for long-lasting change, and atop her wish list is quite simply homes for people who do not have them. "We know that there is a desperate shortage of social homes to rent in London," she explains. "The homes set up in 'villages' for all the thousands of athletes who will be taking part must be designed for use as homes afterwards, not just as short-stay places." She adds that it is vital that homeless people are seen as part of London's communities and have a fair chance to live in these new areas. In 2006, Homeless Link announced its own Olympic strategy, using the games as a deadline to end homelessness in London, and dramatically reduce this nationwide. A recession and a housing crisis aside, the group is still sticking to its guns. "In other countries, homeless people have often been a long way from any benefit," says Ms Edwards. "They have been seen as an embarrassment and swept out of sight for a short time. We felt that 2012 should mark the deadline for really success in ending people's homelessness and leave a lasting social legacy." In addition to this, Ms Edwards says particular attention is being paid to street homelessness, with the mayor currently 'drawing up a plan' to solve this problem, as well as allowing rough sleepers and service users to participate in the jobs created by the Games in tourism, hospitality and construction. Her views are echoed by another large charity, Crisis. "The Olympics can be an inspiration for people who are socially excluded," says a spokesperson for the group. "It should give them the chance to volunteer, take up a sport and generally get them involved in the event, not excluded." At a more grassroots level, Sue Kenten, the chief executive of Drug and Alcohol Support Services East London, says that having worked with vulnerable people for more than two decades, she hoped the Olympics would bring real opportunities to her clients. "Our wish would be to see affordable, local communities developed which give consideration both to sustainability in terms of the environment but mostly, for our client group, harness a real sense of community, offering safety and security, leisure facilities, children's play areas and local work or education facilities, green space and allotments," she says, adding that good transportation and access to the housing would be key so that people do not feel isolated or abandoned. Keith Everitt, chair of trustees at the Branches Day Centre in Walthamstow, is also able to give a more focused response. His organisation's primary concern is the continued increase in number of Eastern European migrants to the area, who are unable to gain access to support services due to their status. "As a charity, we have been overrun with the numbers of people wanting to access our day centre, and we do not have the resources or income to support them," he says. "This will continue to be an issue up to and after the Olympics. Resources will be needed to provide skills and training and opportunities for work, as well as access to good quality low-cost rented accommodation, and support workers to provide long-term support as they re-engage with society." Over to you Baroness Ford: they're not asking for much.
< Who wants to know? A death and a near miss >