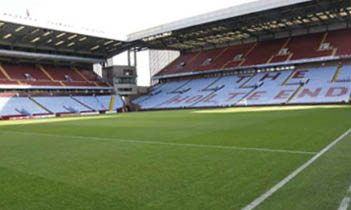 A homeless man has been found living in a makeshift shelter beneath one of the main stands at the home of Premier League football team Aston Villa.

Despite a state-of-the-art security system and regular weekend crowds of 42,000 people, the man remained undetected by Villa staff until a routine sweep of the ground by security teams. His shelter, constructed from cardboard and other items found around the stadium, was found hidden away under the Holte End at Villa Park. Since its discovery, the man has not been spotted again.

Club security are struggling to work out how the man managed to leave and enter the stadium repeatedly without being spotted by CCTV or any of the ground staff.

Regular drinkers at the local Aston Hotel pub reported seeing the man regularly in the area. "I know who he is, but we’ve not seen him for a few days," said one customer. "No-one believed him when he claimed he was actually living at the Villa."

"It’s amazing that he managed to escape detection for so long."

< Thugs jailed for attack on asylum seeker Another violent assault >