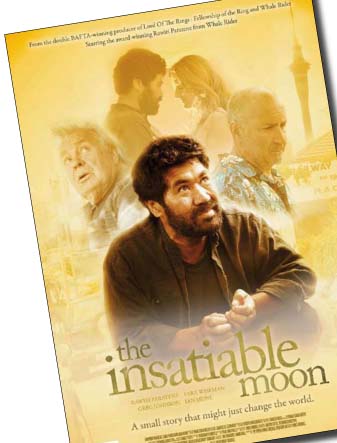 Last month’s Pavement featured a review of The Insatiable Moon, a film set in and around a New Zealand hostel, where a disparate group of characters struggle with homelessness and mental health issues. The film is with a sad, funny, dramatic and tragic, but ultimately uplifting.

Before its first public showing in Birmingham (at the Mac Theatre in Edgbaston during May), The Pavement spoke to one of the producers, Rob Taylor, about the impact he hopes it will have on the perception of homeless people in the region. Although he has spent most of his career in the music industry, Rob has also been the chief executive of a homelessness charity, so already knew a lot about the issues touched upon in the film. And when the opportunity arose to produce a film based on the book The Insatiable Moon, Rob jumped at the chance: “Although it’s quite a controversial book and caused quite a stir, I had no real concerns about its contents.

The Insatiable Moon has been shown to great acclaim in Glasgow and London, so Rob was confident that a Midlands audience would respond similarly. But he is keen for it to make a greater connection in terms of how homelessness and mental health issues are viewed and dealt with. “We didn’t make it to preach or push a message, but to let the story emerge in its own way. But what has happened is that people who have seen the film say they now look at others differently. The Birmingham and Solihull Mental Health Trust sponsored a showing for their GPs and mental health workers. At the end of the film, these seasoned professionals told us they felt they had been reminded why they had got involved in their vocation in the first place.

“They felt that over the years their passion and enthusiasm had almost been pushed out of them by the system. A consultant psychiatrist said the film made him laugh and cry, and rekindled within him the outlook he had when he was a young trainee. Wherever it’s been seen, it has sparked debate, very positive debate. Another viewer couldn’t speak for 30 minutes following the film as he had to think about what he had seen.”

Aside from box office receipts and DVD sales, which are the obvious measures of a film’s success, Rob considers artistic integrity and audience reaction to be of equal importance. “We managed to tell the story we wanted to tell, which wouldn’t have been the case if big film studios had got involved. Secondly, it got people talking, thinking and discussing homelessness and mental health issues. So we are proud of it in artistic terms, and we are delighted with the reaction it has provoked so far.”

Rob Taylor is a Director of Birmingham-based Blue Hippo Media. In addition to his work with Blue Hippo, he is a fellow of the Royal Society of Arts and champions black and ethnic minority music and art. Rob also carries out consultancy work for a number of charitable organisations throughout the West Midlands.