Human rights for all 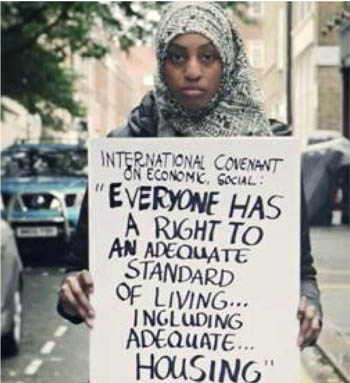 The UK Commons Project (UKCRP – www.commonrights.org.uk) was launched at the House of Commons on Wednesday (18 December) by the four key organisations behind it: Housing Justice, Open Cinema, Trust for London and The Pavement (you may have heard of it).

“The project originated in some of the more blatant examples of what we thought were infringements on people’s basic human rights,” Alastair Murray, Housing Justice Director of Projects, said in his introductory speech – before name-checking Operation Poncho and Westminster’s (thwarted) attempt to made sleeping rough a criminal offence.

Val Stevenson, chair of trustees of The Pavement, said that everyone, homeless or not, should be able to relieve themselves with dignity. “Half the country’s public toilets have closed in the last decade,” she said. “Some London boroughs have none. And a drinking fountain campaign was one of Boris Johnson’s first initiatives when he came to power in 2008, but there’s been little progress. Only 11 per cent of UK public parks have water fountains – and a third of these were out of commission. How is this acceptable?”

Liberal Democrat MP for Bermondsey and Old Southwark and former human rights lawyer Simon Hughes also attended. In his speech he surprised many by recalling the time he slept rough as a new, young arrival to London. “There’ve been occasions when I had nowhere to go to stay at night and had to stay outside – not certain when I would next get inside and with nobody immediately available to help me. One or two nights like that are unsettling enough. So to have no guarantee of shelter for two months, two years – I can only imagine how difficult that is.”

Declaring his support for the project, he said: “I really welcome this campaign... [which] is about promoting, educating, informing everybody that there are basic standards that we should not allow people to slip away from.”

Some people dismiss the European Convention on Human Rights, and the UK’s obligation to it, as ‘foreign interference’. Said Mr Hughes: “Quite often when people argue that we in Britain should abide by international standards on these [rights], very large circulation daily papers or other people have a go at saying ‘All this international rights stuff is nonsense’.”

In fact, it is this “xenophobic argument” which is nonsense, argued Professor Geraldine Van Bueren, QC, in her speech. “You’ve heard about bringing this [law] home, but actually 797 years ago these rights were British. We had in Britain something called the Charter of the Forest, one year after the Magna Carta. It established the right to housing, to food, to heating – Medieval rights that we’ve forgotten.”

Professor Van Bueren also pointed out that while prisoners are, rightly, given food, water and shelter, “these rights are not guaranteed to people who’ve never broken the law”, adding that if poorer nations in Latin America can guarantee to meet these basic needs, why can’t we? “Austerity is no defence for a violation of these rights,” she warned.

For Mr Hughes, the way to win the argument against those who object to the European Convention on Human Rights and the UN Universal Declaration of Human Rights is “by making it personal”. One way to do that is by telling people’s stories, which is just what the UKCRP has done with the help of film network Open Cinema.

The resulting mini documentary, shown at the launch (and available to view on the UKCRP website), features several homeless or formerly homeless people talking about the basic rights denied to them – and the laws which should ensure they are not.

After conducting lots of research into the UN legal framework to incorporate into the film, director Marcus Villaseñor started shooting in October. “We had two days filming: one was organised by Housing Justice; the other by the Marylebone Project,” he told The Pavement. “We asked them [the participants] which of their rights had caused most trouble for them” – unsurprisingly shelter was at the bottom of most, but other daily struggles repeatedly came up too. Villaseñor hopes the film will be a “gateway” to lead people to the UKCRP website and read more: “There’s nothing like it. It cuts against the perception that the state should not help people [access these rights].”

John, who participated in the research for the film, used his speech at the launch to highlight various issues: the many disused properties and offices left empty while people sleep in doorways, the frustrations of the ‘local connection’ demanded by local authorities and the lack of joined-up support. “I deliberately got myself nicked, nicking food out of Sainsbury’s,” he explained. “I got four weeks in prison... I spent every day for four weeks chasing up the housing people. They sent me out homeless... What sort of system is that?”

Some of the people featured in the film were also in attendance. Amanda, who since making the film is no longer homeless, said her wish is for people who are in the situation that she was in “to see that there’s people that can be honest – and to get to the place where I’ve got to”. Ken, meanwhile, said the film was “invaluable” and called for it to be screened on TV.

The project now aims to build momentum and debate around its aims, with the help of working groups in Islington and Southwark, directing people to other charities campaigning for each of the basic rights and raising public awareness. “Now seems to me to be a really good time to draw attention to our collective responsibility to provide adequate house and so let’s step forward and demand the right to shelter for everyone,” challenged Housing Justice Director Alison Gelder.

“The provisions of the 2002 [Homelessness] Act are under attack at the moment from changing definitions in the Localism Act that have weakened the statutory duty of local authorities to house people. And the current debate about access to support for homeless migrant workers that’s going on in Parliament this week. And the policy emphasis in No Second Night Out for me begs the question – why are we talking about no second night out? Why aren’t we talking about no night out?”

[This is a longer version of an article that appeared in the February issue of the print magazine.]

< Commemorating friends and companions First person: Gemskii on regaining control of her life >