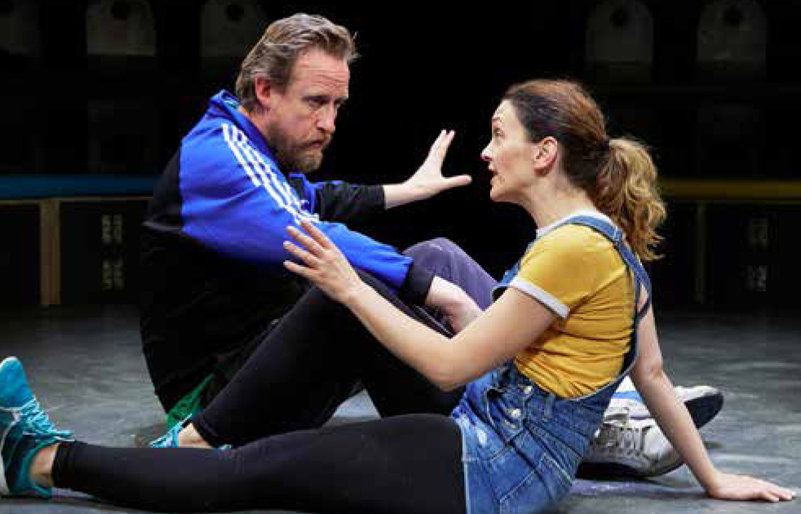 Torturous delight: Neil Bell and Eve Steele shine in The Political History of Smack and Crack © The Other Richard

Watching Eve Steele and Neil Bell deliver stellar performances in Ed Edwards’s The Political History of Smack and Crack is an absolute torturous delight, like watching a slow-motion replay of a long-drawn out car crash that I had somehow managed to walk away from.

For anyone who has found themselves dismissed to the margins of life, like a left-over one in those complicated long division sums, there are going to be parts of this production that will really speak to you.

Rather than drowning in nostalgia, the heavy echoes of the past anchor what is, at all times, a beautifully scripted tale. The production burns bright with northern humour, like the blaze of erupting sulphur on the match head of anti-Thatcherite energy created at the broken edge of ‘80s Britain. It was a time and place where the disco synthesisers of the 1970s gave way to a raw anger that exploded into riots on the streets of major British cities and the twin barrels of smack and crack were loaded to explode into the mainline of working class Britain.

The play was the penultimate event at the inaugural International Arts and Homelessness Festival and Summit, hosted by With One Voice (WOV) that ran from the 12–18 November in Manchester.

WOV has grown in partnership with Streetwise Opera and will become independent this April.

Founder Matt Peacock said, “I had been running Streetwise Opera when the Cultural Olympiad of London 2012 wanted to give homeless people a platform. We offered to put on a big event that brought together as many art groups as possible from around UK – choirs, theatre groups, bands etc. It was called With One Voice – we got asked to do a similar project in Rio 2016. The magic came not from the end result, but through getting people together and supporting and inspiring each other.”

And then came the summit in Manchester which saw 250 delegates from 15 countries swap knowledge, learn from, teach, inspire and empower each other. Numerous discussions, focus groups, workshops, events, exhibitions, plays and gigs were spread out in a few dozen venues over five days.

Matt adds: “We all need to find ways of building people up as well as building houses. Art can’t solve homelessness but homelessness is an issue made up of multiple factors and so we need multiple approaches.”

And for those who question the expenditure, Matt says, “All our funding comes from arts sources, so we aren’t taking money away from homelessness services. The arts community believe in arts for social action and there is no better use of resources than working with people who are or have been homeless.”

He is passionate when talking about the need for a more coherent, unified approach to utilising the arts as part of the overall strategy for dealing with homelessness. “We'd like the arts to be a more respected, understood and widely used approach in homelessness support and in order to achieve that, we'd like to encourage more local and national governments to integrate the arts into homelessness strategy.”

Any doubts I had about the role creativity and the arts has to play in tackling homelessness were banished by this truly incredible coming together of kindred souls. And the jewel in its crown was the heartwrenching Man on Bench Fairytale written by David Tovey which wrapped things up.

The play was as painful and real as anything I’ve ever witnessed on stage. It was a suitable end to a powerful and inspiring event which has planted a seed that will hopefully grow into something powerful, original and above all necessary. Yep, I think One Voice is exacting real and lasting change in the way we think about and deal with homelessness

< Summing up Muddle and misery >