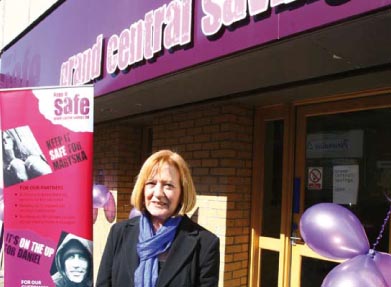 The recent banking crisis has exposed just how reliant our national economy is on the banking system; our banks have become so big that government couldn't allow them to fail. But banks are not only vital to our national economy, they are also crucial to the individual - allowing us to be paid, pay our bills and save. However, despite the nation now owning large proportions of our two biggest banks, there are still 1.75 million so-called 'unbanked' people in the UK.

In our increasingly cashless society, not having a bank account is a serious barrier to gaining employment, and can mean having to pay high commission charges to access wages or benefits. With no bank account, it is also virtually impossible to save for the future.

The need for proof of identification and address make it almost impossible for homeless people to set up a bank account. This is compounded by the social barriers many perceive on entering a high street bank, and the closure of local branches - particularly in the poorest areas, where banks are not considered profitable.

However, there is one bank, Grand Central Savings, which was set up to specifically offer banking services to those who cannot normally access them. Having operated successfully in Glasgow's Carlton area for nine years, GCS has just opened its second branch in Greenock, Inverclyde, currently home to 17,000 unbanked people, the highest proportion in any local authority area in Scotland.

Grand Central Savings offers basic bank accounts to all. Its customers include benefit claimants, (including those on disability allowance), homeless people, ex-offenders (including prisoners moving back into the community), asylum seekers, pensioners, those with mental health problems and addiction issues, and students. With a unique model fully supported by the Financial Services Authority, GCS currently has 1,400 customers in its Glasgow branch and pays out an average of £15,000 each day.

The service is free and no fees are charged on the account or for cashing cheques. Benefits, tax credits and wages can all be paid into accounts electronically. Housing associations tenants can also use a GCS account to pay their rent. "Grand Central Savings is about more than a bank account," says Chief Executive, Jackie Cropper. "We help our customers manage their money on a day-to-day basis, and treat them with dignity and respect. They have often been previously refused accounts at High Street banks because of lack of ID, debt issues or a lack of credit history. GCS offers a real solution."

Grand Central Savings: How it works

To set up an account with GCS, all you need is your National Insurance Number (or Home Office Registration number) and a letter from your benefits agency, job centre or other official government letter confirming who you are. GCS uses a combination of photo identification and passbook to confirm customer identity. Now with two branches, in Glasgow and Inverclyde, GCS has had enquiries from across Scotland and the UK, and is looking into opportunities develop more branches across Scotland in areas with high levels of financial exclusion - specifically at Aberdeen for the next branch.