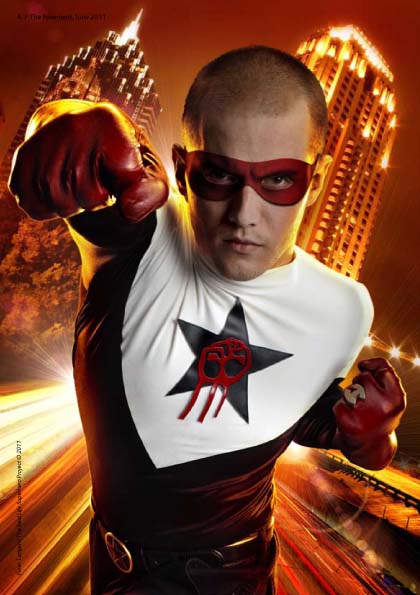 He really is a super man

A very different kind of movement to help the homeless is gaining ground in the US. The Real Life Superheroes are advocates who dress up in comic-book style costumes to bring attention to the plight of rough sleepers in the world’s biggest economy.

One such example is the Crimson Fist, a young man from the southern city of Atlanta, Georgia. Crimson Fist describes himself as a homelessness relief and public safety advocate from Atlanta. His mission since the beginning of 2009 has been to “to ensure the safety of my people and restore the prosperity of my city.”

His creation took shape from a comic book that he wrote himself, and he does all his work in his dark red and white costume. Although not necessarily an intimidating physical presence (he stands at just 5 ft 6ins), Crimson Fist’s costume alone seems to be able to frighten off the baddies. On his first patrol, he came across two men attacking another down an alley. Without a thought to his own safety, he faced up to the two men, who were so startled to see a man in full costume that they turned and ran. The potential victim did not hang around to thank Crimson Fist either. He too was so taken aback by the whole strange scene that he ran away as quickly as possible.

At first the Crimson Fist says he wanted to be a vigilante like Batman, wandering the streets of Atlanta looking for criminals to beat up, a phase he quickly grew out of having realized it was an “unrealistic” way to spend his time. He instead turned to trying to help the increasing homeless population on Atlanta’s streets. He visits rough sleepers, offering water, food and fresh clothing when and where it is needed.

Crimson Fist is not alone in his heroism: a quick internet search finds hundreds of real-life heroes on the so-called Superhero Registry, a number of whom are dedicated to helping rough sleepers. These include the likes of Geist, who describes his task as “to make my city of Rochester, Minnesota, a better, kinder and fairer place” and to look out for what he calls “the Forgotten - those overlooked by mainstream society”. A lot of the Real Life Superheroes write that they are inspired by the need to protect their communities from high levels of crime and the indifference of other citizens, very much taking their cue from the comic book creations which inspired them.

The movement has also recently gained some welcome publicity. Superheroes, a film featuring Crimson Fist and fellow Atlanta hero Metadata, was recently shown at the Slamdance Film Festival and described by IndieWire magazine as “unquestionably the highlight” of the festival.

As we wrote in last month’s edition of The Pavement, the US has a severe homelessness problem, with some estimates saying that 700,000 people sleep rough every night. The problem has been made significantly worse in the last few years by the economic crisis, which has forced a large number of Americans out of their homes.

In the city of Atlanta there are estimated to be around 20,000 homeless people. The difficult situation in the city could be made worse as one of its largest homeless shelters is under threat of closure. The city government and local businesses have been trying to close down the Metro Atlanta Task Force shelter in the centre of the city, claiming it has a negative effect on business and tourism in the area. Their hostility to the centre became clear when they cut off its water because it had not paid its bill, even though nine other organisations which had not paid their bills either did not have their water cut off.