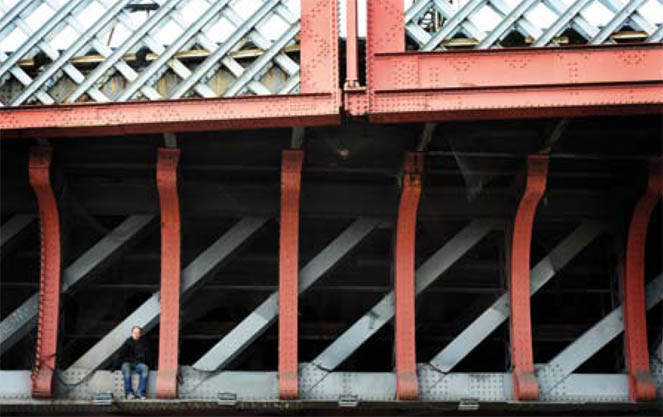 The dangers of sleeping rough were highlighted again last month when the Daily Record reported on the homeless Scots sleeping 30 feet above the Clyde in Glasgow’s Union Bridge.

The paper interviewed Gordon McMillan, 44, one of those who have stayed on the bridge (pictured), who claimed that people were driven to risk their lives sleeping in the bowels of the railway bridge to escape being attacked at street level.

“It isn’t easy to climb up here. It’s dangerous, but it’s better than sleeping at street level,” he told the Record. McMillan said he couldn’t turn in his sleep in case he fell to his death. And he told how he saw another homeless man plunge from the bridge while sleeping and break his back.

“He must have forgotten where he was and tried to turn,” he added “He rolled off the plank and hit a metal section before he hit the ground. That probably saved his life because it flipped him round and meant he didn’t land on his head.”

McMillan also claimed thugs had attacked two of his friends, just last month. One had his face slashed and another was battered. And he said: “These neds think we are there to victimise and attack.”

Since the article was published, McMillan, originally from Kilbirnie, Ayrshire, has been admitted to Glasgow City Council’s residential rehab programme, perhaps prompted by the publicity surrounding his case.

A spokesman from Glasgow City Council said McMillan had contacted the addiction services and was offered a residential rehab place. They added: “The offer has now been accepted and we hope this will help Mr McMillan address his homelessness in the long term.”

However, he is just one of those forced to take desperate measures. There are regular reports of rough sleepers being driven to take ever-greater risks to find a safe and warm place to sleep.

Last month The Pavement reported on a man who was seriously injured following a fall from the rafters of Waverly Station in Edinburgh. Others claim this is merely a longstanding problem that has not been tackled. One skipper, who worked on the River Clyde for over 30 years, commented on the online version of the Record’s story: “The Central Bridge has been known of as a berth for those willing to climb up for as long as the bridge has been there, it is not a new phenomenon… .And no one in the police or the authorities saw fit to do any thing about it.”

While the number of homeless households - 41, 553 in Scotland last year, an increase of 25 percent in a decade - is well documented, the number of people sleeping rough is unclear.

In 1997, the Rough Sleepers Initiative was launched in Scotland in response to the growing number of people sleeping on the streets and in 1999, the Scottish Executive pledged that no-one should have to sleep rough by 2003.

The initiative ended that year and while it led to many improvements in the provision of services for homeless people, there are still many sleeping rough across the country. According to Shelter Scotland, “Glasgow in particular faces a massive problem”.

< Street Shield 26: Have a super Christmas Glasgow shelter planned in time for the big freeze >