Two of Scotland’s local authorities are pressing ahead with plans to outlaw begging on the city streets.

Though begging is a criminal offence in England, north of the border authorities have tolerated it. However, last month Aberdeen councillors voted in favour of a by-law to criminalise begging in the city.

Meanwhile Glasgow City Council is understood to be collecting evidence for the need for street begging to be criminalised ahead of the Commonwealth Games, hosted by the city in 2014.

Time of the month 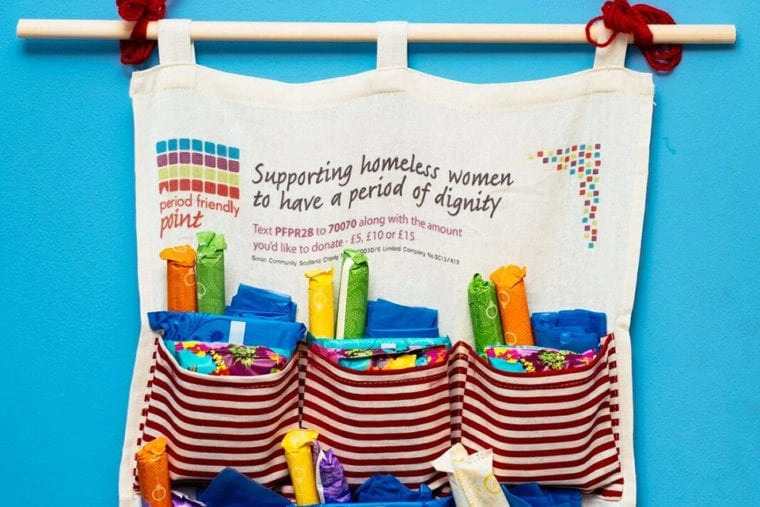 Try asking for free period products at libraries, hostels and community centres. Photo is of a Period Friendly Point available to homeless women in Scotland which is organised by the Simon Community.
© simonscotland.org/period-friendly

The Big Issue street magazine, which is sold by street vendors across the UK, is planning to re-assess its assets, and move into fund management.

In an interview with the Financial Times last month, Nigel Kershaw, group chairman of the Big Issue and executive chairman of Invest Fund Management, said the organisation had decided it would help it to ‘scale up’ its social enterprise arm, Big Issue Invest. It is claimed Big Issue Invest Fund Management will launch funds focusing on social and financial returns to institutional and retail investors. It will aim to raise £250m in the next five years.

A formerly homeless Utah man has created and built a set of five “survival pods,” or mini-shelters, to be doled out to people who currently have nowhere to live.

The survival pods are just four feet wide, eight feet long and constructed from sheets of pressed wood, a wooden frame and a roof made of soft corrugated plastic called Coroplast.

The Department for Communities and Local Government (DCLG) created a media storm last month when it produced a new guide encouraging councils to ‘clamp down’ on ‘blight’ of traveler encampments.

The word ‘blight’ was removed from the final version of the press release and the DCLG refused to apologise for its use despite widespread criticism. There is currently a shortage of legal encampments, but rather than addressing this, the latest guide aims to 'empower' local people to pressurise their councils to close illegal ones and allows councils to decide how many sites they will allow.

Most travellers live on authorised sites and pay income and council tax. Fourteen per cent, however, have nowhere secure to camp.

Lawyers fighting to save a soup kitchen from closure have won permission to take Waltham Forest Council’s decision to evict them to a full judicial review hearing.

The users and organisers of the Christian Kitchen based at Mission Grove in Walthamstow say the council’s decision to evict them would lead to the closure of the service.

The Christian Kitchen, which features in the recent Ken Loach film Spirit of 45, has been running seven days a week for more than 25 years.