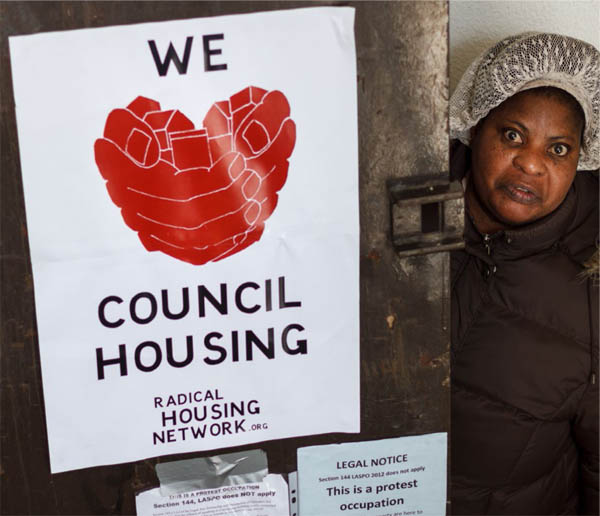 A campaigner occuping a flat on the Guinness Trust estate. © Eddie Ngugi for <i>The Pavement</i>
Hundreds of thousands of people in the capital have nowhere to call home, but ordinary people aren't taking it...

London’s housing crisis has never seemed so stark. But ordinary people are fighting back. Karin Goodwin hears their stories.

“This is the beginning of the end of the housing crisis,” proclaim Jasmine Stone and Sam Middleton, young mothers turned campaigners by their eviction from the Focus E15 Hostel.

There are whoops and cheers outside the courtroom as they gave their reaction to news that the council had dropped legal action against Focus E15’s occupation of the Carpenter estate. These kick-ass campaigners made it feel like the end was in sight.

But is it? According to the Homelessness Monitor 2015, produced by Crisis and the Joseph Rowntree Foundation, London is now a homeless hub. Hundreds of thousands of people in the capital have nowhere to call home.

Housing benefit caps, along with rapidly rising rents and not enough social housing, mean that a fifth of those offered a place to live will be sent out of London.

In a third of cases, it was the benefit caps that caused people to become homeless in the first place.

And while official estimates reckon there were almost 2,500 rough sleepers in England last year, the study reckons it’s probably more like 10,000. On top of that, millions are sofa-surfing, or living with family or friends – ’hidden’ homeless people in plain sight.

But on the streets of London, there’s evidence of a fight-back.

On 31 January, more than 1,000 people marched to demand affordable housing, and last month the Radical Housing Network organised a week of action taking in protests, occupations, debates and film screenings across the city.

The finale was a ‘Block the Budget’ protest outside City Hall, on 23 February, when mayor Boris Johnston was due to pass his budget for the Capital.

It’s this sort of action that keeps the feeling of hope alive, says Saskia O’Hara, a supporter of Focus E15.

She was with the 29 single mothers of the Focus E15 Hostel when they were told that not only were they to be evicted but that they would be moved hundreds of miles away from their communities to Hastings or even Birmingham.

“It was just awful. They were completely distraught,” she remembers.

“It took a lot of courage to stand up against the authorities, but they did it. Plenty is done to frighten you off taking a stand. You are told that you will have made yourself intentionally homeless if you do not take the offer on the table. Parents fear that kids will be put into care. We get contacted all the time by mums in this position."

These days, says O’Hara, everyone has a story of someone moved out of the capital. One woman they spoke to was being sent to Aberdeen. But other aren’t taking it.

“People are getting angry enough now to do something about it when they are told that they need to leave," reckons O’Hara.

"It’s the start of a serious fight back.”

Focus E15 is still fighting for remaining hostel residents, and continuing to highlight the need for homes on the Carpenter Estate, also Newham and earmarked for ’regeneration’ to be saved.

Last month residents of the Guinness Partnership housing in Brixton occupied a flat: others in the West Hendon estate, in Barnett are also occupied. Meanwhile other campaigns to save the Fred and John Towers in Leystone and and the Aylesbury estate in Southwark are in full force, and protests against evictions at Tower Hamlet’s Popular Harca are now kicking off.

Owen Espley, a 35-year-old charity worker and member of Hackney Digs, a campaigning organisation of renters in the borough, says: “When people come to us with housing problems they often feel isolated. Through being involved in the group they start to realise that what is happening to them is not about their own personal failure. It’s a systemic problem. At the moment there is an enormous feeing of a building movement.”

Campaigners say they take their victories where they can. They will be watching closely to see what happens when the case of Titina Nzolameso, a single mother made homeless after refusing an offer of housing in Milton Keynes, finally goes to the Supreme Court, the most recent development in a case she has been fighting for over two years.

And they’re still buoyed by the success of the New Era estate campaigners. The estate was bought by US investors for redevelopment. But following a hard-fought campaign, in December last year they sold it on to an affordable housing association, which has promised to leave rents alone.

“You have to have hope,” says Saskia O’Hara. “If you didn’t have hope you couldn’t keep fighting back.”

< Cooking up a plan Soup runs: a reader replies >