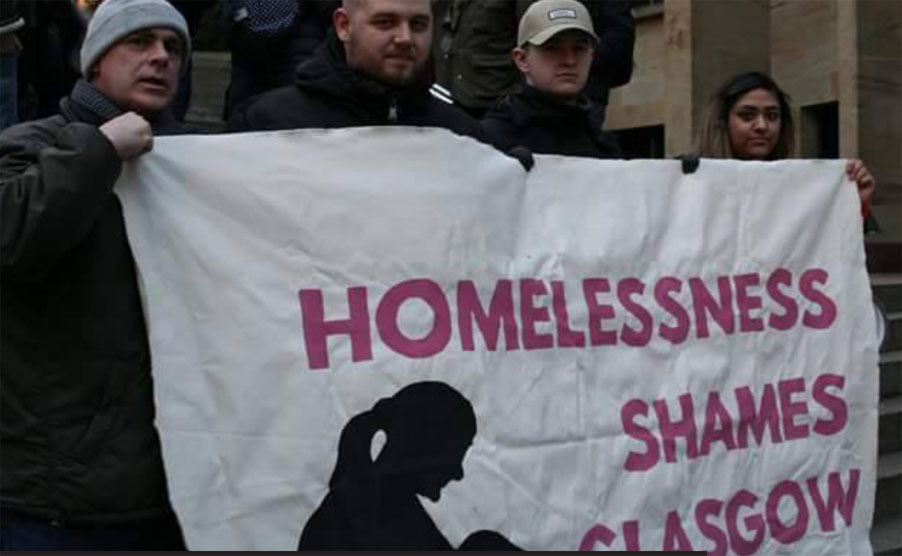 Campaigners outside the Glasgow's Royal Concert Hall. © Jamie Jackson
A man sleeping rough ion one of the coldest nights of the year, has died

A man sleeping rough in Glasgow on one of the coldest nights of the year, has died.

Matthew Bloomer, 28, from Aberdeen, had been sleeping outside a local department store near the city centre on March 21. He was found dead in the snow the following morning.

It is understood that Matthew, who had addiction and mental health issues, had been approached by the Glasgow homeless street team the previous evening and offered a place in a nearby night shelter. The city’s only night shelter, run by the Glasgow City Mission at the Lodging House Mission, is dry and guests are searched on their way in.

Activists demanded that the council start fulfilling their duty to house homeless people. The city council is currently working with the Scottish Housing Regulator because it turns so many unintentionally homeless people away from its services, though this is against the law in Scotland.

Campaigners staged an emergency demonstration in the city following Matthew’s death and have now launched a petition on 38 Degrees. It calls on Glasgow City Council to “act immediately to fulfil its duty to the people of Glasgow and is urging them to open up empty buildings.

“Everyone who presents themselves at a council facility as homeless, should immediately be provided with somewhere safe and warm to stay, until such times as they are able to find permanent accommodation," it says. It also calls for a so-called intentionally homeless people, who may be victims of rogue landlords, to be housed.

Meanwhile, Matthew's brother Paolo Barnett-Bloomer launched the appeal on fundraising site GoFundMe, hoping to bring his body back to Aberdeen for a family funeral. It had raised almost £5k at time of press.

A spokesman said: “This was a tragic death and a police investigation is currently ongoing.

“Our city centre street team works with rough sleepers every night?to get them into support services, including to the winter shelter.

“The reasons for homelessness can be complex and moving on from a chaotic lifestyle can be very difficult.”

Sign the petition: https://you.38degrees.org.uk/petitions/no-more-deaths
Donate to Matthew’s family at Justice for Matty: https://www.gofundme.com/3jvvszc