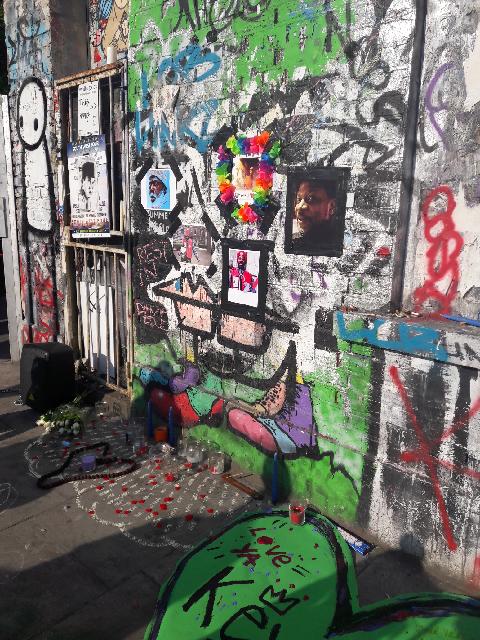 Tributes to Kevin by his BigIssue spot in Hackney Wick
For Kevin Headley, who died aged 52 on 5 May 2018 as the result of a suspected heart attack

For Kevin Headley aged 52 on 5 May 2018 as the result of a suspected heart attack. Tribute from Mat Amp


When we compose tributes to someone we have lost we tend not to say anything negative. We gloss over anything ugly or difficult and instead we choose to shine what's good in that person. With Kevin that’s not a problem because there was very little negative about him. He was that rare kind of person who was both strong and kind in equal measure. It gave him an amazingly calm and balanced presence that rubbed of on those around him.

When Kevin walked into a room he brought a positive energy that instantly made it a better place to be. He inspired by example and made people feel good about themselves. I'm a better person for knowing him and I'm going to miss him terribly.

And I'm one of many because at the end of the day to meet Kevin was to like him and to know him was to love him. I know one thing for sure, when we've wiped away the tears we have to use his memory to inspire ourselves to carry on with the work he was so committed to. It’s what he would have wanted.

And there was a lot of it. He worked with us at the Pavement as part of our From the Ground Up team and he had close ties with the Big Issue. At heart he was a community activist. One of his friends recently described him as “the spiritual heartbeat of Hackney Wick” and Hackney Wick was a place where people would see him regularly at his Big Issue pitch by the station.

You can’t really talk about Kevin without talking about music and art. He helped start the monthly open mic night at Grow and he introduced the Big Issue to the the legendary street artist Stik. He was always doing something and if he was late for you, it didn’t matter because you knew he was doing something that really mattered.

He was one of the most inspirational people I’ve met - a real street soldier with the courage and passion to fight for justice but wise enough to not judge people for being human.

You really didn’t have to spend long with Kevin to get to know him. He was an incredibly intelligent person who never used to look down on people. Instead he chose to smile at the world and inspire those of us who struggle every day to be the better person that he undoubtedly was.

When Kevin’s friends met up last week I passed a notebook round so that people could write down what they felt about him. These are some of the words that kept recurring - energy, inspiration, community, amazing, giving, effortless and remembered.

What more needs to be said? You’ll be missed Kevin. You were an amazing bloke. We can’t believe that you’re gone.