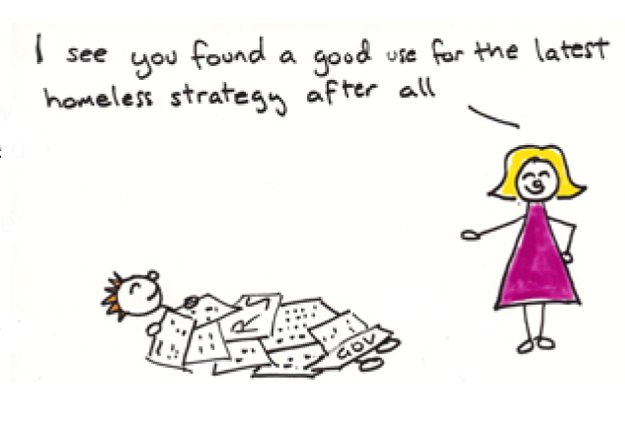 © Ruby
There’s a dispiriting new trend: having a job but still being homeless. This special issue looks at the hard truths of working while homeless. Introduction by Sarah Hough

There’s a dispiriting new trend: having a job but still being homeless. This special issue looks at the hard truths of working while homeless.

For the 11 years I’ve worked in London I’ve never had stable accommodation. At best all I could afford was a room in a shared house, at worst I had to sofa surf with family and friends in order to save for a deposit and try to find a safe and affordable house share. I worked in the care sector with young people for social services and I received a fairly decent wage, but with high living costs and unaffordable rents in the private rented sector, sharing was my only real option. Sharing comes with its own risks and insecurities because you never know what you’re moving into. It could be a party house, a drug house or worse. You may find yourself, as I did, in an illegal sublet with no tenancy agreement or housing rights. Often these landlords demand cash-only payments so as not to expose their benefit or tax fraud.

The pressures of a stressful job and living in unsuitable housing were too much for me.

I ended up losing my job and then losing my home because my landlord wanted cash-only payments which I could no longer provide. I had no rights and no chance to save up for a deposit. I literally was destitute. My personal experience isn’t unique – quite the opposite in fact. Homeless charity Shelter reports in Far from alone: Homelessness in Britain in 2017, that the number of people who are working and homeless has nearly doubled since 2013. By July 2018 Shelter found that more than half of homeless families in England were also in work. In total there are now about 33,000 who work but don’t have a stable home – the “working homeless”. What has led to this massive increase in homelessness amongst a group of people who are working full time who ought to be in a better position to afford housing? Shelter cites:
• High private sector rents
• Ongoing freezes in housing benefit
• Unstable tenancies
• Shortage of affordable housing
• Roll out of Universal Credit causing delays in payments.
• Chronic lack of social housing
• A workforce having to accept zero hour contracts and minimum wages that do not rise in line with living costs, especially in cities where living costs are higher.

Government policy isn’t helping, which is why homelessness can affect anyone, at any time in their lives. Shelter finds that one in three working families in England could not afford to pay their rent or mortgage for more than a month if they lost their job.

In the past, many of the causes of homelessness have been attributed to perceived personal individual failures such as relationship breakdowns, substance misuse problems, mental health and debt. Whilst these may be contributing factors, the fact that work no longer pays shows that you should never assume that because someone is working, they have home security.

• Rent is rising faster than wages.
• Private renters have the highest weekly housing costs – this is made worse by recent benefit changes.
• There are too few houses. A drop in public house building means families are often stuck in expensive, poor quality, insecure privately rented homes.
• More than 1 million people are on the waiting list for social housing, yet in 2017 only 290,000 homes were made available. (Shelter, June 2018)
• More info about working homeless from Shelter press release 23 July 2018): https://bit.ly/2rw2SJl

Benefits freezes,
Feeling the squeezes;
Once you
Could have believed it,
Working, full time,
Would provide
What you needed,
To survive,
With enough,
To get by,
The lies
Of modern times,
Working full time,
But wages in decline,
Food banks on the rise,
But why do we need them?
No surprise,
We need them,
Cause we don’t
Make enough to survive,
To pay rent,
To pay to eat,
To pay for life.
It’s a crime!

< Banter: How to secretly live in the pub